A question of human rights: Is China an aggressor and oppressor?

Chinese academic Li Yuehua takes a look at reports on China’s human rights record, and analyses whether it really deserves its negative reputation. Hasn’t China tried to improve the lives of its people, and isn’t the right to survival and development a major part of human rights? He believes that painting China as an aggressor and oppressor only fulfils the interests of a few politicians to the detriment of people-to-people relations between China and the West. 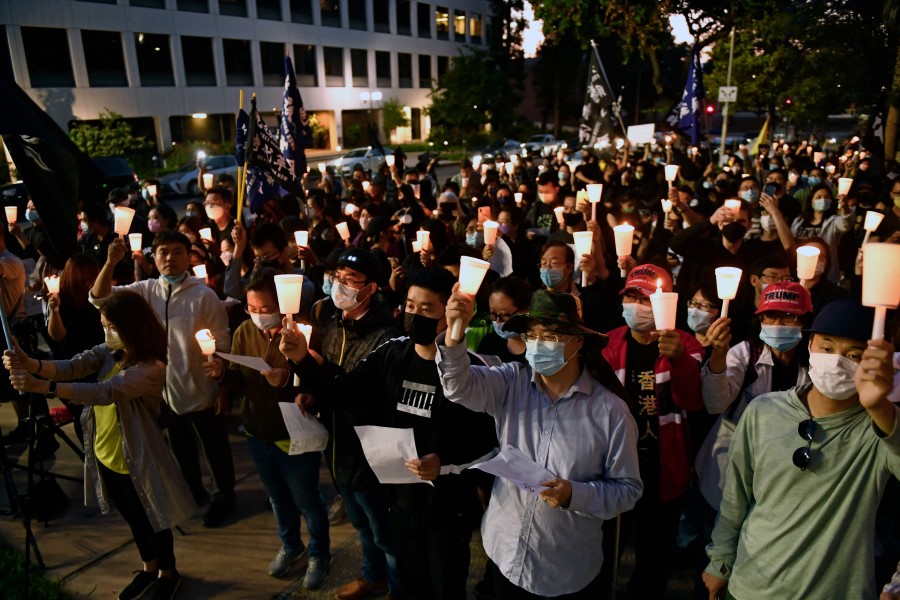 People attend a vigil commemorating the 32nd anniversary of the 1989 Tiananmen square pro-democracy protests and crackdown outside of the Chinese consulate in Los Angeles, California on 4 June 2021. (Patrick T. Fallon/AFP)

Candice Chan - 11 August 2022
China’s Big Fund has come under scrutiny following a series of high-profile corruption investigations involving key persons in the chip industry. The CHIPS Act was also recently signed into law in the US to counter China, which makes things even more difficult for the sector. Zaobao correspondent Chen Jing speaks to industry experts to find out how the Big Fund can come out of this crisis.
Read more
Translated by Candice Chan on 8 June 2021

These days, Western media reports mostly bash China’s human rights record and give it a bad reputation. The way they say it in Europe and the US, it seems that doing business with China means sacrificing human rights.

But is that the truth? Interestingly, going back in history, today’s human rights critics — the UK and the European powers — once invaded China and violated its interests. And China, which developed in this historical context, is the one criticised for its human rights.

US and European politicians are against China out of political interests, but their actions exacerbate the anti-China climate in their own countries.

A chain reaction of anti-China sentiments

The US feels that China wants to overtake it, and so it wants to contain China. This was obvious when Donald Trump was in office. When Joe Biden took over, he continued the containment policy, perhaps due to the domestic political climate, or perhaps because he holds the same views himself. From Hong Kong to Taiwan to Xinjiang issues, as long as it has a chance of interfering with China’s development, the US actively “speaks up”.

What the Chinese see is rural poverty alleviation and wealth creation... As for the so-called “genocide” in Xinjiang, it is a fact that the population of Xinjiang is growing and the people’s quality of life is improving.

Europe is getting increasingly fragmented, and with far-sighted German chancellor Angela Merkel soon to step down, European politicians are also joining the US in attacking China, whether it is because they are influenced by the US or furthering their own political interests. Their media reports paint China as trampling on human rights, and such a portrayal reinforces negative views of China among the people of Europe and the US. In turn, these sentiments strengthen the anti-China impetus of European and American politicians, leading to stronger anti-China voices in their societies.

The Chinese people see it differently

The problem is, their offensive is the opposite of how the people in China feel. What the Chinese see is rural poverty alleviation and wealth creation. United Nations Secretary-General António Guterres congratulated China for its great achievements in poverty alleviation. As for the so-called “genocide” in Xinjiang, it is a fact that the population of Xinjiang is growing and the people’s quality of life is improving.

In the classes that I teach, each year there are students from Xinjiang. Some come from poor families and write that they are thankful for national policies that allow them to study in eastern coastal areas. Support provided by these policies has been an important catalyst for these students on their road towards attending top Chinese universities.

Those who have lived internationally would have a sense of this. The waiting time in China for a particular treatment is much shorter than in other countries, and while Chinese doctors may not have as much medical knowledge as European or American doctors, Chinese doctors are as experienced and effective as overseas doctors. During the pandemic last year, patients’ medical fees were all taken care of by the government; so far, few countries have done that.

There is residential segregation in Europe and the US. Taxes are low in slums, and so they receive poor public services, resulting in a vicious cycle. JD Vance, the writer of US bestseller Hillbilly Elegy: A Memoir of a Family and Culture in Crisis, made it out of the slums; when he went back to the slums where he grew up, he found to his despair that it was now more difficult for the children there to get an opportunity to make it out, as he saw the growing rich-poor gap in US society. And in Paris, the arrondissement or district that one lives in signals one’s situation and quality of life.

The Chinese government strives to achieve social fairness. The right to survival and development should have some bearing on human rights.

While there are indeed school district houses in China, it is not the case that poor children are unable to realise their dreams because of social obstacles. In fact, the opposite is true — to this day, there are many rural students in China who have made successful lives of themselves outside their village through doing well in the gaokao (the National College Entrance Examination). The Chinese government also attaches great importance to giving rural students equal opportunities for education.

I work at a college and am familiar with undergraduate admissions. Taking into account the fairness of gaokao, the Chinese Ministry of Education removed the independent admissions option in 2020, that is, where schools can use their own criteria in determining whether a student can enter the school. However, it retained this option for outstanding rural students.

While lucky ones such as the authors of Educated: A Memoir and Hillbilly Elegy exist in the US, such lucky people are few and far between in American slums. The Chinese government strives to achieve social fairness. The right to survival and development should have some bearing on human rights.

... the Western media must reflect on the objectivity and value orientation of their reports.

As the birthplace of philosophical classics like the Analects (《论语》) and the Tao Te Ching (《道德经》) — Buddhism was even sinicised and incorporated as part of Chinese philosophy after it was brought to China — the core of Chinese culture is not about excluding others, but is all-encompassing and all-embracing. Chinese culture is extremely tolerant, as reflected in the belief that “tolerance breeds greatness” (有容乃大). Now, a country prescribed to such a cultural system is being accused of trampling on human rights and carrying out “genocide”. Should one laugh or cry?

Western media’s current biased reporting on China could be a case of reflecting the authorities' understanding or coming to one’s own conclusions after emotions are stoked. It could even be the result of egging on by commercial interests. However, can such reports stand the test of time? From a secular point of view, media and reporters who write truthful, objective reports will stand out from those who use cookie-cutter style media releases. Thus, whether looking at it objectively or from the perspective of news values, the Western media must reflect on the objectivity and value orientation of their reports.

China has always taken pride in its 5,000 years of civilisation. This culture is that of the Silk Road and not that of guns and swords. Modern Chinese history is marked by bullying and humiliation from Western powers. The Chinese have therefore developed a deep-seated victim complex.

Notably, in the Chinese context and culture, “wealth and power” refers to building an affluent society for its people and gaining the power to protect itself from other bullies. But this does not mean that it will bully and invade other countries once it gains wealth and power. Western societies must keep this in mind when understanding China’s rise. Otherwise, cognitive dissonance will result in misunderstandings.

On the one hand, the Chinese are enjoying an increasing standard of living. On the other hand, China is the poster child of a poor human rights record in the eyes of Western public opinion. How can China accept this? And what can Western society gain? Apart from fulfilling the political interests of some politicians who are using the anti-China narrative as a shortcut to distract the people from the domestic situation, there is nothing to gain but everything to lose in the long term.

Instead of saying that globalisation has strengthened the role of the state, it is more accurate to say that globalisation flows have highlighted the need for government services. While reflecting on and strengthening government services, it is even more important for the government to return to logic and reason and not push society into the rhetoric of venting their emotions. The latter brings no advantage to the country and society at all.

Related: Chinese academic: Why the US ignores its own human rights issues and accuses others instead | Is there a genocide in Xinjiang? | The fight that never ends: Why are China and the West now fighting over Xinjiang cotton? | Chinese researcher: This is how China gets rid of poverty | Lifting 'the poorest of the poor' out of poverty in Sichuan: Does poverty alleviation mean uprooting people from their homes? | Poverty alleviation in Tibet: For young Tibetans, material wealth and city life beckon