A Singaporean in China: How Covid brings out the worst in people

A spate of news of pet “cullings” and cruel acts against people amid Covid-19 lockdowns in China have captured widespread public attention. While it may be easy to classify the instigators of such acts as heartless, former journalist Jessie Tan believes that those actions may not be borne out of an individual’s ill nature or will, but a reaction to the complex forces amid the Covid-19 lockdown. 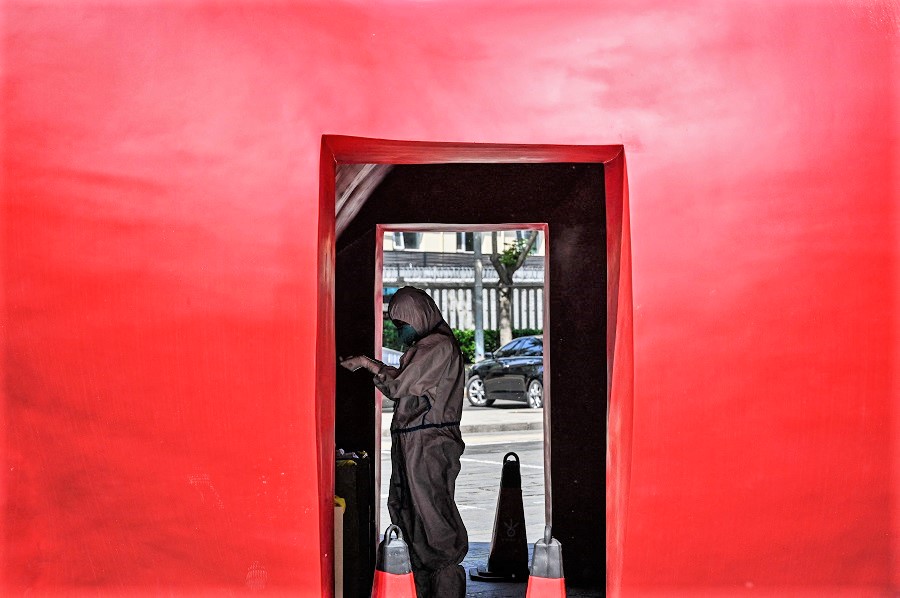 A health worker wearing personal protective equipment (PPE) is seen at a makeshift testing site outside a museum along a street in Beijing, China, on 4 May 2022. (Jade Gao/AFP)

Grace Chong - 21 June 2022
In pursuit of better working conditions, China's post-00s generation has gained a reputation for being newbies who are difficult to manage and who show their superiors little respect. While those who go to extremes may be in the minority and some admire their brave fight for workplace rights, ultimately, they may be putting their job prospects in jeopardy.
Read more
Translated by Grace Chong on 5 May 2022

In early April, a viral video from Shanghai was met with horror on Chinese social media. In the clip, a Covid-19 prevention worker dressed in white personal protective equipment (PPE) could be seen chasing a corgi on the road and beating it several times to death with a shovel. A viral photo showed the body of the dog being removed in a plastic bag.

Unfortunately, this is not the first time that pets have died due to Covid-19 prevention measures in China. In November last year in Jiangxi province, another corgi was beaten to death by Covid-19 prevention workers who entered the dog owner’s home for disinfection work after the owner tested positive for Covid-19 and was taken away.

The security camera in the house recorded how the dog yelped and tried to flee from the workers. While the dog’s death was not recorded on camera, media reports state that it had been “culled”.

In a recent case in March this year, a white Samoyed in Guangdong province was also brutally killed by Covid-19 prevention workers when they entered a home for disinfection work.

Unfortunately, pets are not the only ones at the mercy of Covid-19 preventive measures in China. Seriously ill patients have been denied treatment at hospitals because resources were diverted to contain the virus.

A nurse in Shanghai died from asthma after being rejected for treatment at the very hospital she worked at due to Covid-19 restrictions; a 71-year-old violinist died of suicide because he could no longer tolerate his abdominal pain after being turned away at a hospital.

There was also a video of a woman shrieking and begging an ambulance staff to lend her their defibrillator to resuscitate her family member whose heart had stopped beating. The ambulance staff, who was fully cloaked in PPE, simply shook his head and looked ahead, while saying that it was not possible to do so.

‘Deindividuation’ and a sense of anonymity

The Covid-19 workers in the situations above appeared to be heartless and inhumane. Indeed, it is easy to attribute all of those deeds to an individual disposition: the Covid-19 prevention worker could beat the corgi to death because he was more sadistic in nature; or the ambulance staff could refuse to help the desperate woman in need of the defibrillator because he was more cold-blooded than us.

However, a few psychology theories could provide alternative explanations for their behaviour. For example, the infamous Stanford Prison Experiment conducted by psychologist Philip Zimbardo in the 1970s proposed that situational forces could influence individual behaviour and make good people do evil things.

In the experiment, young men who were average in all aspects of physical appearance and personality tests were randomly assigned to serve as guards or prisoners in a mock prison at the basement of Stanford University. The experiment found that the guards, who were told to oversee the prisoners, became more and more aggressive and assertive as time went on, to the extent of demanding the prisoners strip naked and do demeaning things to one another. The prisoners initially did not take the experiment seriously, but soon became as compliant as a real prisoner.

... the Covid-19 prevention workers who beat animals to death and refused treatment to severely ill patients may not usually have done such acts in the past, but they do so now because of the change in context.

Zimbardo believes that context is relevant in shaping how people behave, and it shows that good people can perform evil acts if the context allows for it. In other words, because the young men were situated in the context of a prison, albeit a mock one, and assigned the roles of guards, they started behaving accordingly, including doing and saying things that deviate from how they would usually behave outside of the context of being a prison guard.

The donning of sunglasses also prevented others from seeing the guards’ eyes, creating a sense of deindividuation. Research shows that people who are “deindividuated” would more readily inflict pain on others.

Similarly, the Covid-19 prevention workers who beat animals to death and refused treatment to severely ill patients may not usually have done such acts in the past, but they do so now because of the change in context. Under the stringent zero-Covid policy, workers are most likely rewarded and encouraged to be as strict as possible in enforcing regulations. Hence, being unsympathetic could be viewed as desirable, and some may even convince themselves that it is necessary to commit these inhumane deeds for the greater public good.

Moreover, these workers gain a sense of anonymity from being cloaked from head to toe in a white PPE that hundreds of others are also wearing, thus causing an anti-social effect where they feel that nobody could identify them individually.

... the majority of the participants performed acts that obviously conflicted with their personal conscience, albeit reluctantly, to obey an authority figure.

Another psychology experiment that could explain the atrocities is the Milgram experiment conducted in the 1960s. A high proportion of the experiment’s participants, men aged between 20 to 50 years old from a variety of backgrounds, would fully obey instructions to administer electric shocks to another person, even though they knew that the intensity of the shocks was dangerous and could even hear the recipients of the electric shocks crying out in pain.

In other words, the majority of the participants performed acts that obviously conflicted with their personal conscience, albeit reluctantly, to obey an authority figure.

Similarly, although the Covid-19 prevention workers who denied treatment to patients may know that it is inhumane to turn severely ill people away, they still do so after convincing themselves that they were "just following orders" and hence feel a reduced responsibility for their actions.

... while we may feel that we are kind people, the fact is that most of us are very susceptible to significant character transformations when we are caught in the crucible of social forces.

Political theorist Hannah Arendt similarly proposed that evil acts are not necessarily perpetrated by evil people. Instead, they can simply be the result of bureaucrats dutifully obeying orders, thus the phrase the “banality of evil”.

Indeed, in his book The Lucifer Effect, Zimbardo outlined a set of dynamic psychological processes that can induce good people to do evil deeds: deindividuation, obedience to authority, passivity in the face of threats, self-justification and rationalisation.

To put it simply, while we may feel that we are kind people, the fact is that most of us are very susceptible to significant character transformations when we are caught in the crucible of social forces.

Zimbardo writes, “What we imagine we would do when we are outside the crucible may bear little resemblance to who we become and what we are capable of doing once we are inside its network.”

Acknowledging that situational and systemic factors affect an individual’s behaviour certainly does not excuse or absolve them from the responsibility of their immoral or inhumane acts, but if we want to prevent the above mentioned atrocities from happening again, we have to recognise that those actions may not be borne out of an individual’s anti-social disposition, but a reaction to the complex forces in a given situation.

Once we consider the context, we are then able to change it such that it does not permit or reward inhumane and evil deeds in future. On an individual level, once we understand how situations can change a person, we can then be more conscious of how we can challenge these powerful external forces, and resist being blindly compliant and obedient.

Related: Animal protectors and feminists hindering pandemic work in China? | Is China taking policies to the extreme to achieve zero-Covid? | When Beijingers can't return home: Is China going overboard with its zero-Covid measures? | New Great Wall of China against Covid-19 built with flesh and blood of the little people | China needs to break free of its zero-Covid policy. Here's how.