While still reeling from the economic impact of the Covid-19 pandemic, Shanghai has loosened its regulations on the street stall economy. Some believe that the move will breathe life back into the stalled city, while others think it is a stopgap that will do little to help its domestic economy bounce back. Zaobao correspondent Chen Jing tells us more. 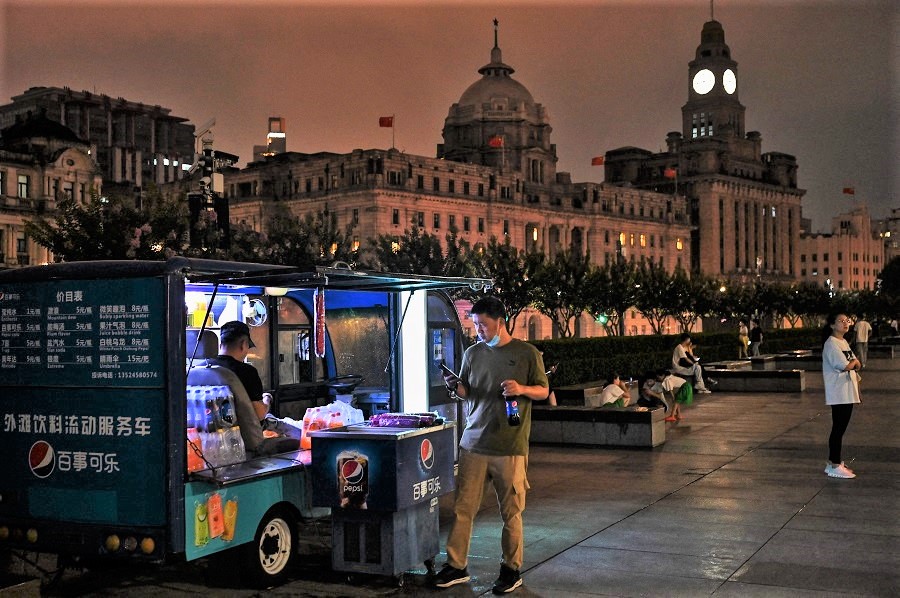 A man buys a soft drink from a vendor in the Bund promenade along the Huangpu River in Shanghai, China, on 23 August 2022. (Hector Retamal/AFP)

Grace Chong - 25 November 2022
China’s resurgence of Covid-19 infections has widened the gap between the young workers opposed to the tightening of controls, and the older generation that feel safer with strict measures in place. Given that the elderly make up a high proportion of the Chinese population, Chinese authorities seem to be holding fast to the dynamic-zero policy. Zaobao correspondent Wong Siew Fong tells us more.
Read more
Translated by Grace Chong on 29 September 2022

Late one night, I was walking home when I saw something strange on a familar street: a long queue at a pushcart under a street lamp. Portions of noodles, sausages, meat slices and bean sprouts, along with plastic containers were neatly stacked on one side of the cart, while the sweat-ridden cook busily worked his magic over a makeshift stove.

This one-man stall was simple yet inviting. The aroma of the fried noodles stopped me in my tracks — if not for the many night owls waiting in line, I would have bought myself a bowl for supper.

In the bustling city centre, street stalls only appear quietly in the dead of the night. But in two months’ time, they could become a regular fixture on the streets of Shanghai.

... naysayers lament that this is just a temporary measure to ease the pressure on employment.

Last week, the Shanghai Municipal People’s Congress passed the revised Regulations of Shanghai Municipality on the Administration of City Appearance and Environmental Sanitation (《上海市市容环境卫生管理条例》), which lifted the ban on setting up street stalls on roadsides.

The amended regulations, which will take effect on 1 December, allows local governments to allocate public areas for business activities such as setting up stalls and selling self-produced agricultural products, but with restrictions remaining in key areas such as major roads, scenic areas and commercial centres.

As soon as the news broke, the topic “Shanghai lifts blanket ban on street stalls” soared to the top of Weibo’s trending searches, albeit receiving a sea of mixed reactions. Some people cheer that the street stalls will bring back the hustle and bustle of the city, and that the new regulations reflect a change in the urban governance of Shanghai.

However, naysayers lament that this is just a temporary measure to ease the pressure on employment. “Street stalls will liven up the city’s atmosphere in an economic winter, but then they become an eyesore to the city’s image once the economy is flourishing,” they said.

In the early stages of the Covid-19 pandemic in 2020, China saw a wave of “street stall economy”. Sichuan capital Chengdu was the first to ease regulations on mobile vendors in March 2020, which led to the creation of 100,000 jobs.

In the same year, Chinese Premier Li Keqiang affirmed the move during the Two Sessions — meetings of the Chinese People’s Political Consultative Conference and the National People’s Congress — and several provinces and cities, including Beijing, subsequently relaxed the management of mobile vendors. The Office of Spiritual Civilization Development Steering Commission even released a statement saying that roadside booths, street markets and mobile vendors will no longer be an assessment criteria for entitling a “civilised city”.

Shortly after, however, Chinese state media such as the China Central Television and Beijing Daily shot down the street stall economy, asserting that being influenced “blindly by winds and trends” will eat away the hard-earned achievements of urban governance. Beijing authorities began to strictly supervise the street vendors, while the statement from the Office of Spiritual Civilization Development Steering Commission was taken down.

As the Chinese economy slowly emerged from the shadow of the first Covid-19 wave, the street stall economy, which was seemingly just a fad, gradually disappeared as well.

The street stall economy did not take hold in Shanghai during that time, but it is starting to come to life now following the city’s lockdown this year. Just before the lockdown in March, street vendors selling fruit and vegetables popped up as Shanghai households were rushing to stock up on supplies.

And when the lockdown was first lifted in June, many stores remained closed and dining-in was not allowed in restaurants. In turn, barbers cut customers’ hair along the street, while restaurants set tables and chairs outdoors for “al fresco” dining.

However, relying on this marginal market economy to move domestic demand in this huge city of 25 million people and shift the trend of weak consumer spending is clearly unrealistic.

Compared with brick-and-mortar stores, street stalls are easier to set up and can make quick returns. For the low- to middle-income group who have been hit hard by the pandemic, relaxing the regulation of mobile vendors has given them a new channel of livelihood and helped reduce the short-term employment pressure.

However, relying on this marginal market economy to move domestic demand in this huge city of 25 million people and shift the trend of weak consumer spending is clearly unrealistic. The street stall economy provides little room for value-add or the use of technology; it would not be a long-term solution or core driver to get Shanghai’s economy out of its plight.

Shanghai the lead for other cities

If the street stall economy in the first half of the year was prompted by pent-up consumer demand, then the authorities’ current easing of regulations over street stalls could be seen as a passive reaction to the economy, highlighting the inadequacy and lack of policy implementation.

On 28 September, Shanghai announced a fresh round of measures to stabilise growth, focusing on the sectors more heavily hit by the pandemic, such as culture, tourism, exhibitions and aviation. These measures include providing subsidies for movie tickets, compensations for the closures and limited admissions for theatres, and venue subsidies for economic fairs that will be held in Shanghai despite pandemic measures.

Meanwhile, these one-time subsidies will do little to help overcome the high alert over pandemic policy and the loss of confidence in the overall economy.

In terms of stimulating consumption and investments, the authorities will also give subsidies for big-ticket items such as home appliances and cars, provide loan interest assistance for small- and medium-sized enterprises, and continue to attract foreign companies to Shanghai.

However, short-term subsidies cannot make up for the losses that theatres and cinemas have sustained from prolonged closures, while fairs that have been cancelled at short notice due to pandemic measures cannot even recover their venue fees.

The general environment is bleak and consumer appetite remains weak; small businesses are less likely to take loans, and foreign companies are more careful with investments. Meanwhile, these one-time subsidies will do little to help overcome the high alert over pandemic policy and the loss of confidence in the overall economy.

As ground zero for many of China’s policy reforms, some people hope that Shanghai’s easing of regulations for street stalls will set an example for other cities, so that the street stall economy will bring back vibrancy to the cities. In fact, instead of solely promoting the street stall economy, why not be more flexible with pandemic policy and regulations in general, and create a friendlier environment for operators and investors? That would surely make the economy more resilient and bounce back.

Related: Street stalls: Saviour of livelihoods for ordinary Chinese after Covid-19? | Persistent poverty and a weak middle class: China's fundamental challenge | Many want out as Shanghai recovers from lockdown