Suzhou Museum: Why I.M. Pei failed to learn the lessons of the ancient Chinese

The building and landscape architecture of Suzhou Museum has been lauded for its intricate blend of old and new. Cultural historian Cheng Pei-kai is in awe of the late architect I.M. Pei, but sees at the same time, the need for man-made landscapes to blend into their natural environment. Otherwise, the handprints of their maker will all be too visible and the result far from the scenes of nature it was precisely trying to capture. 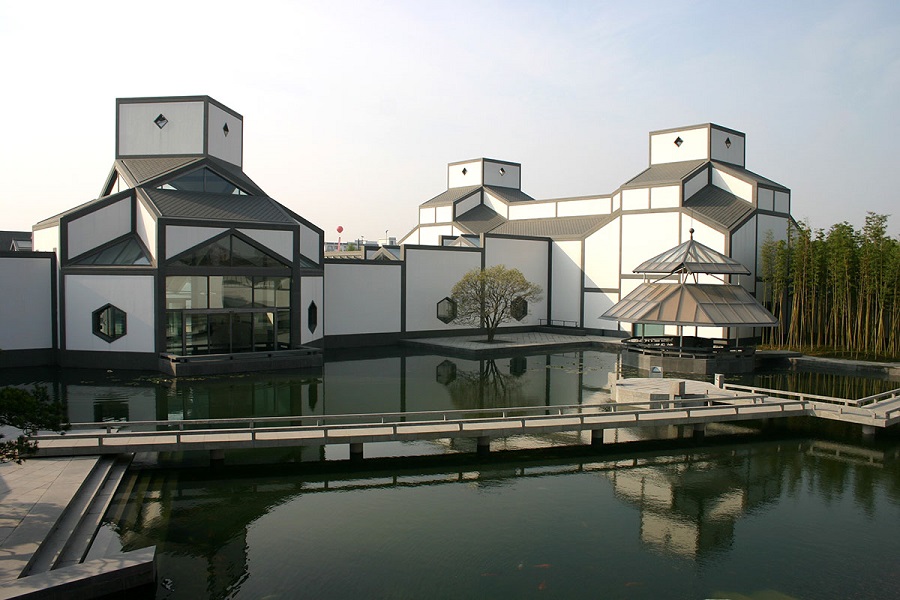 Grace Chong - 30 January 2023
Amid ongoing tensions, a high-level visit by US Secretary of State Antony Blinken to China in the coming week shows hope for improved relations between the two economic powerhouses. Zaobao correspondent Yu Zeyuan notes that while the meeting may not produce practical results, it is a much needed exchange to manage and control China-US relations from worsening.
Read more
Translated by Grace Chong on 10 September 2020

I was visiting the Suzhou Museum when I suddenly thought I should ask I.M. Pei for his views on the gains and losses of designing this museum.

The Suzhou Museum is located in the northeast region of the ancient city of Suzhou. It stands next to the Humble Administrator’s Garden which is part of the UNESCO-listed “Classical Gardens of Suzhou”. The old building was the former mansion of Taiping Heavenly Kingdom’s Prince Zhong (忠王), while the new building completed in 2006 is the masterpiece of world-renowned architect I.M. Pei.

I often hear people say that I.M. Pei’s Suzhou Museum design is beautiful, elegant, and the pride of Suzhou. It is the most exemplary combination of the classical and the modern, the best reflection of space and time, the greatest application of practicality and aesthetics, and the most harmonious mix between East and West.

Whenever I think of it, I feel as though I am on cloud nine as traditional Chinese culture has finally modernised.

It is indeed exhilarating to hear everyone’s words of approval. In fact, I have heard countless architectural friends waxing lyrical about the museum for five or six years. Their words of praise have long been imprinted in my mind and have even become indisputable truths. Whenever I think of it, I feel as though I am on cloud nine as traditional Chinese culture has finally modernised. Not only that, it has integrated itself with Western cultural traditions and paved a future for Chinese culture through the aesthetics of building and landscape architecture.

I frequent the Suzhou Museum quite often as I regularly visit Suzhou to study Kunqu (昆曲, Kun opera) and to admire its gardens. I believe I’ve been there five or six times already. Every time I’m there, I’m indeed awed by I.M. Pei’s ingenious knack of marrying modern design with touches of intricate Suzhou landscaping.

The design of the exhibition hall fulfils the professional lighting requirements of modern art galleries while simultaneously keeping intact traditional walls with windows to the world. It is as if one is walking into the study of an ancient literati to have a first-hand experience of Suzhou’s history and culture. Yet, as the building is modern, you are also able to admire art treasures in a bright and open space.

Just before I make a turn down one end of a cloister, if I look back, I can see large windows reflecting the emerald green of bamboo trees outside. It’s truly a stunning sight to behold. At the end of a long corridor sits a hidden courtyard with a thatched-roof gazebo that transports one to the secluded countryside of a retirement abode. This reminds me of Daoxiang Village (稻香村) in Daguan Garden (大观园, Grand View Garden) featured in Dream of the Red Chamber (《红楼梦》).

Chapter 17 of Dream of the Red Chamber describes the scenery of the Daoxiang Village: “A hidden wall of brown mud was gradually revealed. All along the top of the wall, rice-straw was used as a protection… Inside there were a number of thatched houses, but outside there were mulberry, elm, hibiscus, and thorn — the young new shoots of trees of various kinds. Following its winding course were woven two rows of green fencing.” (Note 1)

Cao Xueqin (author of Dream of the Red Chamber) was indeed astute and had a clear mind. With just a few words, he accurately described and dissected the fatal flaws and far-fetched interpretations of man-made landscape architecture.

But Jia Baoyu (protagonist of the novel) criticised these seemingly beautiful scenes of country living, and said that they went against nature — they neither followed the laws of nature, nor reflected nature’s glory: “Clearly it was made by the strength of man. In the distance there is no neighbouring village. Near at hand it does not ... any fortified wall. It backs on to hills but there is no flow of water. It is on the water edge but there is no spring. On high, there is no pagoda of a secluded temple. Below, there is no bridge connecting it with the market. It comes sheer out all alone. It does not seem much to look at… They were just afraid that a place might be forced to be the kind of place which it was not really and that a mountain might be forced to be where there was no mountain. Although it is in every way skillfully contrived, yet after all the parts are not what they ought to be in relation to each other.” (Note 2)

Every scene before our eyes is the work of man, leaving behind traces of copious management. While it is based on the traditional style, it is far from being a work of nature. This is its loss.

Cao Xueqin (author of Dream of the Red Chamber) was indeed astute and had a clear mind. With just a few words, he accurately described and dissected the fatal flaws and far-fetched interpretations of man-made landscape architecture.

Jia’s criticisms could be used to evaluate the architecture of the Suzhou Museum and reveal the difficulties that I.M. Pei faced when he was designing it. The Suzhou Museum is an ingenious design because of its use of Suzhou landscape features filled with Chinese cultural emblems in transforming something man-made into a work of nature. This is its gain. The problem is that while these features and cultural emblems have been used, they seem very intentional and forced in showcasing Suzhou landscape’s “natural artistry”. Every scene before our eyes is the work of man, leaving behind traces of copious management. While it is based on the traditional style, it is far from being a work of nature. This is its loss.

Ji Cheng of the late Ming dynasty wrote in Yuanye (《园冶》, The Garden Treatise): “The garden is ingenious in that it borrows scenes from nature's surrounding landscape, such that they complement and reinforce one another to form a refined and unified whole. This cannot be done by any artisan, nor can it be designed by the owner of the garden itself. Garden design requires an expert yet there is the need to save costs. As the garden is based on its natural landscape, you need to consider the highs and lows of the ground and the regularity of the terrain. If a tree obstructs vision, it has to be pruned. If there are springs or streams, you have to direct it to a rock, so that water and rock can beautifully complement each other. Build a resting hut wherever it is suitable to do so, and build a pavilion wherever it is appropriate to do so. The garden path may be remote, and the guiding path should be winding. This is what is meant by being refined and integral to the whole.”

“While a garden is divided into the interior and exterior, it doesn’t matter if the borrowed scenes are from nearby or from afar, be it a towering mountain or an ancient temple high up in the air. As far as your vision brings you, cover and hide unrefined scenes, and keep and display beautiful ones. Whether it is the fields or a village, it will appear misty and beautiful from your garden. This is what is meant by ingenuity in forming a unified whole.”

Thus he could only build a modern wall to isolate the building from the outside world before incorporating traditional touches and cultural emblems on the inside, building in effect, an artificial garden that simulates nature.

Ji emphasised the garden's surrounding landscape and "borrowed scenes" — that is, adapting to the natural situation, and considering the whole environment from the building of houses to the adding of streams and mountains as one. One must also accommodate the landscape’s ecology and ensure that it blends into nature.

I believe I.M. Pei must have referenced Ji’s landscape constructing traditions when designing the Suzhou Museum. Perhaps he faced insurmountable difficulties in modern city planning and was unable to learn from the lessons of the ancient people. Thus he could only build a modern wall to isolate the building from the outside world before incorporating traditional touches and cultural emblems on the inside, building in effect, an artificial garden that simulates nature.

Ji also said, “Borrowed scenes are most important in landscape architecture. For example, you can borrow scenes from afar and nearby, from the air or the ground, and from specific seasons. Scenery and people become one and the sights you see strike a chord in your heart. This is like painting — the soul of the finished painting is already in one’s heart before the first stroke is made, so as to achieve what one has in mind.”

Perhaps this is what I.M. Pei had in mind, but could not fulfil?

Note 1 and 2. As per the translation prepared for publication by missionary Bramwell Seaton Bonsall in the 1950s and preserved in the archives of the University of Hong Kong library.

Related: Yuelu: 40 years of longing for a thousand-year-old Chinese academy | Art and history in a bowl of Suzhou noodles | Suzhou’s way to the Emperor’s heart | Professor Littlewood and his love for Chinese opera