Zaobao journalist Miao Zong-Han takes a closer look at voter fatigue in Taiwan in the upcoming “nine-in-one” elections, caused mostly by the arguing over plagiarism allegations, which might interest the highly educated but bore the average voter. Another question is whether the atmosphere at these elections will be a good indicator of things to come in the 2024 general election. 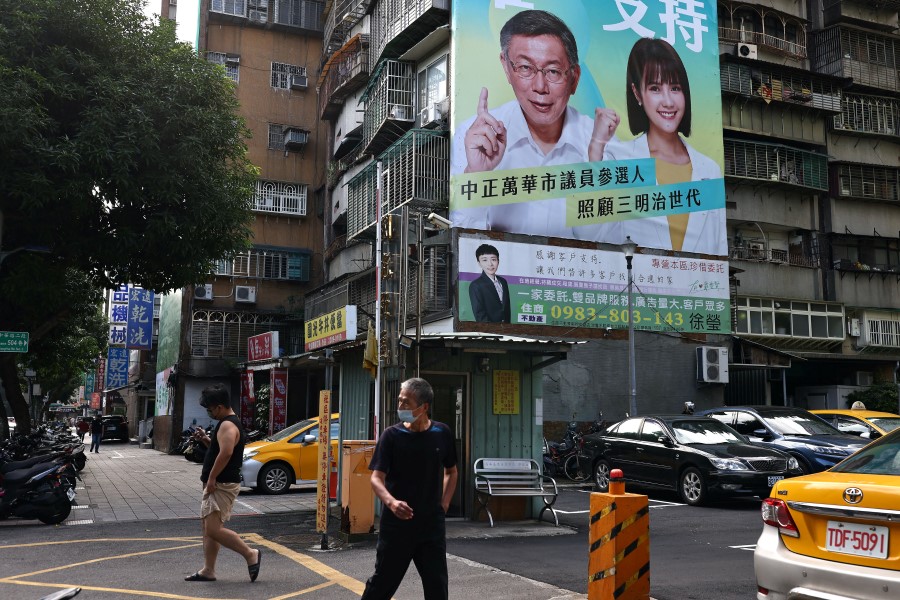 Candice Chan - 28 November 2022
Often referred to as the world’s economic “canary in the coal mine”, South Korea has seen its economy tumble over the past year, impacted by external factors such as US interest rate hikes and signs of recession in key trade partners. The accumulation of domestic factors — currency crisis, tumbling stock market and rising inflation — is also hitting the South Korean economy hard. However, this industrial powerhouse has the domestic means to climb out of the doldrums.
Read more
Translated by Candice Chan on 23 November 2022

Even as the “nine-in-one” local elections approaches in Taiwan, most people are unenthusiastic. They are sick of the candidates hurling plagiarism accusations at one another and are also hesitant about heading home to vote amid the pandemic. Academics interviewed gauge that a voter turnout of 60% would be in line with previous average figures.

Braving Taipei’s early November autumn rains, many parliamentarians stood in the morning cold distributing flyers, hoping to gain voter support. However, Xiaojie (pseudonym), who works in publishing, did not stop and had her head lowered under her umbrella and earphones on all the way to the subway.

Hailing from the southernmost part of Pingtung, Xiaojie went to Taipei for further studies and stayed there to work after getting her degree. Although she has been living in Taipei for 12 years, her residential records show her old address. Even though the Taipei polls are taking place nearest to her, it is of no consequence.

All about plagiarism scandals

She told Zaobao that after being based in Taipei for so many years, she doesn’t even know who’s running in Pingtung. Also, with colleagues resigning amid the pandemic, her workload has gotten heavier and she just wants a breather on her days off, so she does not plan to go home to vote.

... this election has all been about the plagiarism of theses, with practically no discussion on policy, which has made everything uninteresting.

Thinking back to the presidential election two years ago, Xiaojie believes she was more politically involved then, “but after two years of the pandemic, one feels that many things are no longer so important”.

She said self-mockingly: “Maybe life and the pandemic have stripped away the time I have to care about politics.”

As to the cause of the drastic change, she thought for a while before saying this election has all been about the plagiarism of theses, with practically no discussion on policy, which has made everything uninteresting.

Like Xiaojie, 30-year-old Mr Xu, who is in the retail business in Taichung, is also less than enthusiastic about this election, and more dissatisfied. He said: “This election is like making a selection among a bunch of ‘rotten apples’. Especially all the arguing over plagiarism of theses — that only makes people feel that all the camps are equally rotten.”

Added to that, said Mr Xu, over the past two years, at the central and local level, Taiwan’s Covid controls and recovery policies have been a mess, which has further put him off voting.

... this strategy is targeted at highly educated swing voters and would lead to public fatigue and numbness.

Following reports in July of plagiarism by former Hsinchu mayor Lin Chih-chien, the academic qualifications of Taiwan's local candidates have come under scrutiny.

Professor Liao Dachi of the Institute of Political Science at National Sun Yat-sen University said this election claims to be the one where candidates’ academic qualifications have come under the strictest scrutiny ever, but this strategy is targeted at highly educated swing voters and would lead to public fatigue and numbness.

Professor Wang Yeh-lih of the Department of Political Science at National Taiwan University said the cold election atmosphere was not only due to negative election strategies.

... since Ko Wen-je ran for Taipei mayor in 2014, Taiwan’s local elections have been increasingly dependent on “cyberspace warfare” conducted online and on social media...

He explained that unlike national elections, regional elections are more localised. Young voters working elsewhere are naturally unfamiliar with the candidates at home, leading to low voting enthusiasm, so that voter turnout is usually between 60% and 70%.

Prof Liao assessed that if voter turnout for these local elections reached at least 60%, maintaining the status quo, “that would already be not bad”.

She also observed that since Ko Wen-je ran for Taipei mayor in 2014, Taiwan’s local elections have been increasingly dependent on “cyberspace warfare” conducted online and on social media, a trend that is clear in this year’s race.

Prof Liao noted that this strategy was targeted at encouraging voter participation from the aforementioned group of younger voters who may have left their hometowns for study or work.

Prof Wang added that this “cyberspace warfare” in local elections was most relevant at mayoral and city council levels, because more voters need to be reached, while elections at county magistrate and county council level and below remained focused on “ground battles” — face-to-face interactions with voters.

And among these local heads, the heads of 14 counties (including municipalities) are running for re-election — three for the DPP and 11 for the opposition KMT.

Prof Wang said in cases of re-election, intense competition might upset a stable situation, so the strategy would be to keep things peaceful.

... the general view among outsiders is that this is a preview of the 2024 general election.

He felt that as those running for re-election were mostly KMT candidates, it would be harder for the Blue camp to have a popular candidate leading the voting trends in other areas. But while the DPP candidates had no baggage of re-election, they were affected by the failings of the central government, which would hamper the electoral situation.

Not a good indicator of 2024 general election

While the elections seem lukewarm, for Ms Xu, who came to Taiwan from Hong Kong over ten years ago and got her residency two years ago, there are many points of observation and exploration in these elections. She said, “While I also don’t feel much about these local elections, this is the first election that I can participate in after so many years in Taiwan, and I will probably vote.”

As for how to choose among unfamiliar or unknown candidates, Ms Xu said brightly: “Look at their political views. I’ll read the election material carefully and tune in to the TV debates, and then identify a candidate whose arguments and thoughts are more agreeable.”

Following this round of elections, Taiwan’s local political map will change, and the presidential and Legislative Yuan elections will be held in January 2024 — the general view among outsiders is that this is a preview of the 2024 general election.

In fact, the atmosphere of the 2024 election would likely be quite different.

This article was first published in Lianhe Zaobao as "台民众对各阵营相互攻讦感疲厌".

Related: The pandemic is affecting Taipei's mayoral election | KMT could still turn the tables on the DPP in Taiwan's year-end local elections | Will the great-grandson of Chiang Kai-shek be the next Taipei mayor and Taiwan leader?