Under the phase one China-US trade deal signed in January, China has committed to purchasing an additional US$200 billion worth of US products and services. But in the current circumstances, will it be able to meet those commitments? And will US President Donald Trump terminate the deal, or negotiate an interim agreement? Will a new trade war escalate matters into a hot war? 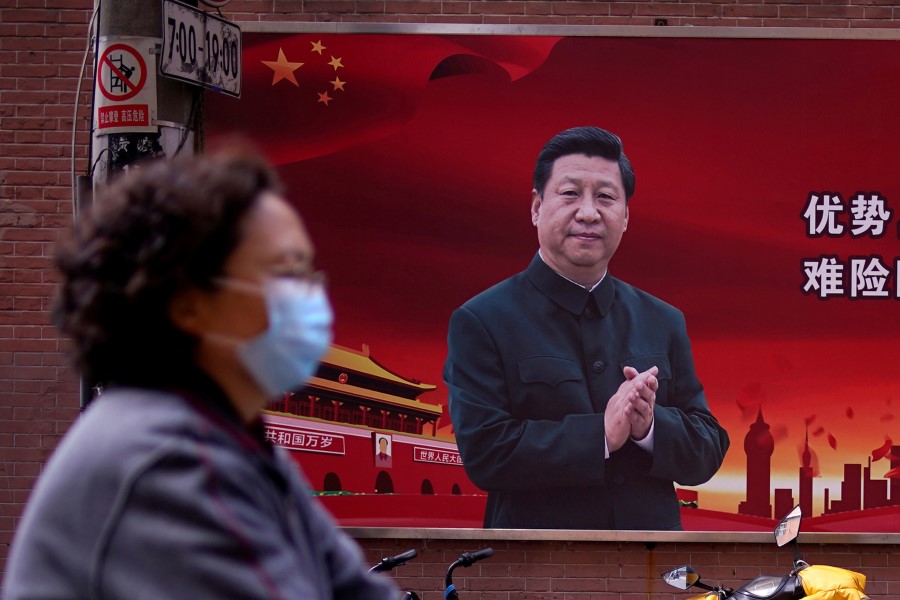 A woman walks past a portrait of Chinese President Xi Jinping on a street in Shanghai, 12 March 2020. (Aly Song/REUTERS)

Candice Chan - 28 November 2022
Often referred to as the world’s economic “canary in the coal mine”, South Korea has seen its economy tumble over the past year, impacted by external factors such as US interest rate hikes and signs of recession in key trade partners. The accumulation of domestic factors — currency crisis, tumbling stock market and rising inflation — is also hitting the South Korean economy hard. However, this industrial powerhouse has the domestic means to climb out of the doldrums.
Read more
Translated by Candice Chan on 5 May 2020

Following a retaliatory increase in tariffs on China, US President Donald Trump has declared that if China cannot fulfil its commitment to purchase an additional US$200 billion (S$283.6 billion) worth of US products and services, he will terminate the phase one trade deal that was signed early this year. Analysts say that the impact of the coronavirus might make it difficult for China to meet that target this year, and if China and the US cannot reach an interim agreement, trade frictions might worsen already poor relations.

At a virtual town hall session with Fox News at the Lincoln Memorial on 3 May, Trump reiterated that increasing tariffs would be the “ultimate punishment” for China, and that he will be looking at China’s purchasing of US products with the outbreak. “They took advantage of our country. Now they have to buy (US products), and if they don’t buy, we’ll terminate the deal.  Very simple.”

China has purchased nearly 620,000 tonnes of soybeans from the US, the largest volume purchased in a single week since December.

Under the phase one trade deal signed in January, China committed to buying an additional US$200 billion worth of products and services over this year and next year, based on 2017 import figures. Of this amount, US$76.7 billion was to have been spent this year, including US$32.9 billion in manufactured goods, US$12.5 billion in agricultural goods, US$18.5 billion in energy products, and US$12.8 in services.

To make up for delays in purchasing due to the coronavirus, China has recently bought a large amount of US agricultural goods. The US Department of Agriculture website shows that as of the week of 24 April, China has purchased nearly 620,000 tonnes of soybeans from the US, the largest volume purchased in a single week since December.

...it will be difficult for China to meet its targets in purchasing manufactured goods and energy products. - Gao Ruidong, Guotai Junan Securities

However, agricultural goods are not what China is most behind on purchasing. A report by Guotai Junan Securities says that if China is to meet its commitments, its annual imports have to increase 127% year-on-year; its first-quarter increase was 110%, just slightly lower than the target, which means there is a chance of meeting its target in that area. As for manufactured goods and energy products, the target increase for this year is 85% and 724%, but import figures for both have dropped in the first quarter of this year, and there is a lot of pressure to catch up.

Gao Ruidong, an analyst with Guotai Junan Securities, felt that given falling oil prices and the shutdown of the US economy, it will be difficult for China to meet its targets in purchasing manufactured goods and energy products. The target for manufactured goods could still be met through increased purchases of electronic goods, but energy imports will be limited by low oil prices, and the purchasing shortfall in crude oil products would be difficult to close without a jump in imports of natural gas and coal.

...the resurgence of the trade issue is complicating matters, so that China-US relations might be torn beyond redemption. - A/Prof Cheng Xiaohe, Renmin University of China

In an article on Caixin, Gao wrote that trade has always been one of Trump’s aces up his sleeves in taking aim at China. Given the pressure of this year’s presidential election, “in order to win votes, Trump might take a risk and impose sanctions on China’s technology sector, and exert pressure on the Taiwan issue, or even rip up the previous trade deal,” he said.

Associate Professor Cheng Xiaohe of the School of International Studies at Renmin University of China also warned that Trump does not make empty threats when it comes to trade, and the trade deal might just be thrown back to square one. China and the US have been arguing about the source of the coronavirus, and now the resurgence of the trade issue is complicating matters, so that China-US relations might be torn beyond redemption.

Cheng thinks that whether it is trade or the coronavirus, China is now on the defensive, and the initiative in China-US relations lies with the US. “Now, we have to see if Trump intends to break the vicious cycle and work with China to come up with an interim trade deal for the coronavirus, otherwise there will be less leeway between China and the US.”

Rumours of US plans to “de-sinicise” supply chains

US officials said the Trump administration is also planning to push for the “de-sinicisation” of supply chains (such that US companies would be less reliant on China), and “turbo-charge” moving US companies out of China.

Reuters yesterday quoted several senior US officials saying that the US government is looking into which manufacturing sectors are essential, and how they would operate outside of China.

The government might provide tax incentives and subsidies to encourage US companies to move their production lines out of China — even if not back to the US, to somewhere more friendly.

The report also warned that Beijing needs to be prepared in a worst-case scenario for armed confrontation between the two global powers.

Some officials also said the US is pushing to establish an alliance of trusted partners called the Economic Prosperity Network, including businesses and civil organisations from the digital, energy, infrastructure, trade, and education sectors. Members will abide by the same criteria in reducing reliance on China through coordinated planning.

Armed confrontation between China and the US cannot be ruled out

Reuters also reported that an internal Chinese paper prepared by the China Institutes of Contemporary International Relations (CICIR) — a think tank affiliated with the Ministry of State Security — warned that Beijing’s relations with Washington could tip over into confrontation on the back of hostility heightened by the coronavirus outbreak.

The paper, presented early last month by the Ministry of State Security to top Beijing leaders including President Xi Jinping, concluded that global anti-China sentiment is at its highest since the 1989 Tiananmen Square crackdown.In addition, Beijing needs to be prepared in a worst-case scenario for armed confrontation between the two global powers.

US to maintain presence and dominance despite coronavirus

In another security development, AFP reported that the US Navy sent four ships at the end of April to conduct Arctic security operations in the Barents Sea north of Russia for the first time in over three decades, amid challenges by China and Russia to test US defense resolve.

The Barents operations followed last week's "freedom of navigation" operations by the US Navy in the South China Sea near the disputed Spratly and Paracel Islands. Defence Secretary Mark Esper was quoted as saying that the "Chinese have been a little bit more provocative in that part of the world" and that the US wanted to make sure that “the laws of the sea and international rules that have sustained us all very well for decades now” are maintained. In another sign of tit-for-tat, the Chinese Navy conducted a drill in the South China Sea on its way back from a Gulf of Aden anti-piracy operation, days after the US Navy exercises.

Related: US companies in China: No place that can take China's place | How many US companies will leave China? | Why would China agree to such a “one-sided” deal?