Why China is regulating the property market

Rapid real estate and infrastructure development in China over the past two to three decades has improved people’s lives, but also led to rising housing prices and property speculation. Regional governments have started to step in with regulatory measures. Commentator David Ng thinks these are good signs, as a society’s wealth should be distributed by labour and contribution instead of through housing. 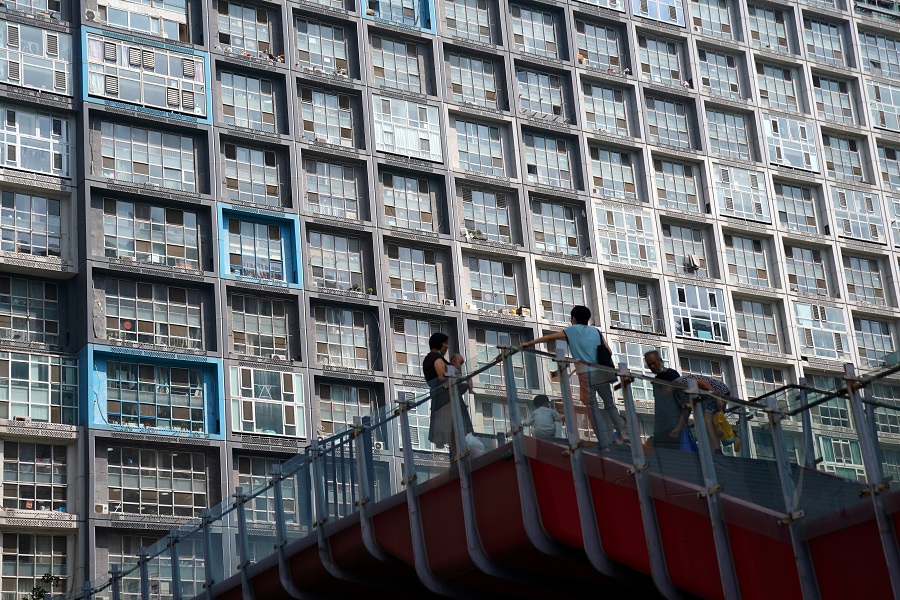 People wearing face masks are seen on an overpass in front of a residential building in Beijing, China, 11 August 2020. (Tingshu Wang/File Photo/Reuters)

Grace Chong - 23 November 2022
US academic Wu Guo looks at the recent online furore over the mushrooming of state-run communal canteens in China and offers his views from the US. While providing food for the needy should be part of the state's responsibility, there should also be space for civil society, private enterprises and the public to play a role to create kind and healthy communities.
Read more
Translated by Grace Chong on 18 August 2021

While high property prices can increase sales revenue and expand supply, they deter buyers and lead to property oversupply. The oversupply of Chinese commercial housing has been a persistent problem for many years.

Prior to and in the early stages of reform and opening up, I visited various regions in the central Chinese province of Henan. Back then, the region was poverty-stricken. From what I can remember, there were few buildings on both sides of the street opposite Xinxiang railway station.

When I recently saw television news reports on the Henan floods, I observed that high-rise buildings have sprung up in various places including Xinxiang. While the city’s drainage facilities are inadequate, many other types of infrastructure are in place. Consumption levels and social welfare standards have clearly risen, and the floods actually triggered insurance claims for 400,000 vehicles. Evidently, the region is no longer as backward as it was before.

Rapid real estate and infrastructure development in China over the past two to three decades has improved social welfare in many provinces, not just Henan.

Without large numbers of commercial residential buildings being built, residents’ living environments and standards of living would not have drastically improved.

Rising housing prices have made home owners richer, which boosts consumption. But because of this, property purchases are not only made for a roof over one’s head, but for investment.

The beneficiaries of rising housing prices are not only housing developers but also a large group of small property owners. In recent times, real estate assets account for 77.7% of an average Chinese household’s net assets. The spillover effects of wealth drive social consumption and economic growth.

Despite measures that some local governments in China have introduced to tame the property market, the commoditisation of commercial housing has given rise to strong investment demand and rising property prices.

While the growth of the real economy is tangible and full of potential, China’s property prices are way above typical wage and rental incomes. The building of a property bubble poses a tough challenge for the economy.

Transactions in China’s property market could add up to a high of 25 trillion RMB in 2021, which is a quarter of China’s GDP in 2020. New mortgages would roughly amount to 17.5 trillion RMB, which accounts for nearly 90% of new loans.

Transactions in China’s property market could add up to a high of 25 trillion RMB in 2021, which is a quarter of China’s GDP in 2020. New mortgages would roughly amount to 17.5 trillion RMB, which accounts for nearly 90% of new loans. This shows that the property market has a huge impact on China’s economy.

Currently, many local governments in China are regulating the funds that enter the property market.

In the second quarter of the year, some Chinese cities saw the tightening of housing loan caps. Mortgage rates have been raised and credit cycles are extended. Some banks have also reduced or suspended the issuance of personal housing loans.

Additionally, some cities are also reforming the school district housing policy. A variety of measures are put in place to temper soaring housing prices.

Society’s wealth should be distributed by labour and contribution instead of through housing. Boosting economic growth by allowing the widening of the wealth gap between the rich and the poor is no longer a policy preference of China today.

The gloom of the Covid-19 pandemic did not stop China’s real economy from expanding, increasing people’s confidence about the future. As China no longer needs to maintain consumption and employment through the spillover effect from the housing market, restrictions on the housing market have thus been tightened as well.

Houses are for living in and not for speculation. Society’s wealth should be distributed by labour and contribution instead of through housing. Boosting economic growth by allowing the widening of the wealth gap between the rich and the poor is no longer a policy preference of China today.

Apart from cracking down on the capital market and the internet, tightening the supervision of the property market is also an important economic management measure of the Chinese government.

Suppose we compare current measures with China’s macro-control prior to the 1997 Asian financial crisis. China’s current level of development, marketisation, and internationalisation have far surpassed that of the 1990s.

At present, the US has been maintaining a low interest rate for a long time to support economic growth, and China is certainly aware that the US’s asset prices and federal debt are at relatively high levels.

Economy
Can China save its property market and economy amid fastest-spreading outbreak to date?