Former Chief Secretary for Administration John Lee is running for Hong Kong's top job as chief executive and is the only candidate who has Beijing's approval. Hong Kong businessman and political figure, Lew Mon-hung, takes a look at why Lee is Beijing's preferred choice, taking into account Beijing's view of the current global situation and China's priorities. 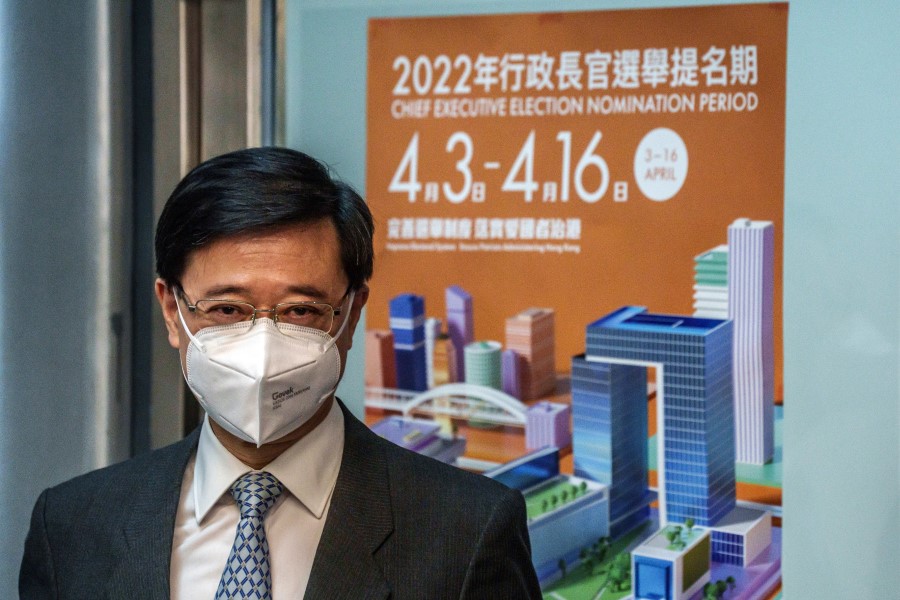 John Lee, Hong Kong's former chief secretary, poses for the media ahead of submitting his application for the upcoming Chief Executive election in Hong Kong, China, on 13 April 2022. (Lam Yik/Bloomberg)

Candice Chan - 23 November 2022
Zaobao journalist Miao Zong-Han takes a closer look at voter fatigue in Taiwan in the upcoming “nine-in-one” elections, caused mostly by the arguing over plagiarism allegations, which might interest the highly educated but bore the average voter. Another question is whether the atmosphere at these elections will be a good indicator of things to come in the 2024 general election.
Read more
Translated by Candice Chan on 14 April 2022

Hong Kong Chief Executive Carrie Lam's failure to govern, as seen from the anti-extradition bill protests and pandemic policy missteps which led to more than a million Covid-19 cases, has left her with no hope for re-election.

'Lam out, Lee in' enigma

Looking at these three items, no one would have associated them with a “security official”. Surprisingly, just one month later, Chief Secretary for Administration John Lee — a former police officer who has no background in economics, finance or bread-and-butter issues — announced his resignation on 7 April to run for chief executive as “the only candidate”.

Such an intriguing series of events in the Hong Kong government would be incomprehensible if seen in the context of just Hong Kong alone.

Lee began his career as a police officer and was later appointed as secretary for security. He held the post for three and a half years before being promoted to chief secretary for administration. Just nine months later, Lee stepped down to run for chief executive and is all but confirmed to be elected.

Such an intriguing series of events in the Hong Kong government would be incomprehensible if seen in the context of just Hong Kong alone. Only when one raises it to the level of Beijing’s national coordination (全国一盘棋, lit. the nation as one chess game), and considers Beijing’s perception that the world is undergoing  changes never seen before in the past century (百年未有之大变局), as well as its strategic assessment of China’s future relationship with Western countries, can one get to the bottom of the “Lam out, Lee in” enigma.

War on all fronts

On 2 September 2021, an essay written under the name Li Guangman, titled “Everyone Can Feel a Deep Change Taking Place” (《每个人都能感受到，一场深刻的变革正在进行!》) took China by storm. It called for a second Cultural Revolution and advocated closing off the country again. The essay was shared by almost all state media, with people strongly believing that the ideas in the essay should be recognised by the central leadership.

In late March this year, Li Guangman posted another essay that gained widespread popularity, titled “National Policy: How Should China Prepare for a War on All Fronts with the US and the West?” (《国策：为应对美国及西方的全面战争，中国需要做哪些战争准备？》) The essay suggested that the Russia-Ukraine war is a sign that “China-US relations has undergone an inevitable and irreversible qualitative change; China-US cooperation is no longer sustainable; and opposition, conflict and even war will become the main features of China-US relations. So, China should have a more urgent sense of crisis when it comes to national security, and get fully mobilised for a war on all fronts, following the breaking down of China-US relations, decoupling, confrontation, conflicts and war.”

Does this sort of situational assessment and so-called national policy reflect Beijing’s intentions? There is no denying the facts:

First, after Russia’s full-scale military invasion of Ukraine and open threat of nuclear action, and investigations exposing Russia’s killing of civilians in the Ukrainian city Bucha, China has firmly held on to its stand of “no limits to China-Russia friendship, and no exclusions to China-Russia cooperation” (中俄友好无止境，中俄合作无禁区). It has refused to call Russia’s action an invasion and has not denounced Russia, while public opinion in mainland China is still heavily pro-Russia and anti-US. This is clearly part of its preparations for “a war on all fronts”.

Second, over the past couple of years, mainland China’s pandemic efforts were initially a matter of public health policy, but later became elevated to the top political level. Amid lockdowns in various places including Wuhan, Xi’an and now Shanghai, local government leaders have all referred to the situation as “going to battle”, with the distribution of residents’ daily supplies similar to a planned economy. In Shanghai, troops are deployed, which smacks of military control, and exudes an air of preparing for “a war on all fronts”.

Third, in recent years, there have been loud calls in mainland China for a “reunification by force” with Taiwan, and it has become the norm for People’s Liberation Army (PLA) aircraft to patrol close to Taiwan as a show of strength. Some party mouthpieces have even claimed that PLA troops have the right to fly over and conduct exercises in Taiwan airspace — this is a real show of preparing for “a war on all fronts”.

Promoting a former security official like John Lee is in line with the political direction of handling “a war on all fronts” with the US and the West.

Security and stability the top priorities

It is clear that there is at least one camp in Beijing that believes that China-US relations will break, and decoupling, opposition, conflict and battle will be its main features. To Beijing, US-led Western countries are using the Russian invasion of Ukraine to show their stance towards China; and going forward, it is highly likely that China will suffer political delineation, economic decoupling; diplomatic sanctions and isolation; and military containment.

When it comes to Hong Kong, the US and Western countries believe that “one country, two systems” is dead, and see the SAR as just another city in mainland China that will suffer the consequences of conflicts taking place in its vicinity, even if it is not a party directly involved (城楼失火，殃及池鱼, lit. a fire in the watchtower is also a calamity for the fish in the moat).

In anticipation of this, Beijing will definitely steel itself to drop its illusions and prepare to fight.

“Reform and opening up”, “one country, two systems”, “international financial centre”, “public opinion” — all these will become secondary. The only top priorities are maintaining the security of the nation and the regime, as well as its stability.

... it is precisely because Lee was sanctioned by the US and has no vested interests with the Western powers that he can be trusted to abide by the instructions of the party,

Having Lee in charge of Hong Kong and plugging the gaps in national security would make it easier to implement the central government’s concept of “overall governance” in Hong Kong during battle, including military governance. And so, Lee is a “hero of the times” forged by the general climate and situation of preparing for “a war on all fronts”.

Interestingly, in August 2020, the US announced sanctions on a group of Hong Kong officials, including John Lee, then the secretary for security, for undermining Hong Kong’s autonomy and human rights. Naturally, this is not good for a Hong Kong chief executive who must attend international meetings and exchanges, and would also get in the way of them becoming Hong Kong’s goodwill ambassador and presenting the Hong Kong narrative, and it would not help restore confidence in Hong Kong as an international financial centre.

But Beijing is certain that conflict or even war between China and the US is an inevitable situation, which naturally gives rise to the hostile mentality that “the enemy of my enemy is my friend”. And so, it is precisely because Lee was sanctioned by the US and has no vested interests with the Western powers that he can be trusted to abide by the instructions of the party, and that he will do all he can to maintain the security of the nation and the regime, as well as its stability.

An ancient Chinese proverb goes, “When the timing is right, everything falls into place (时来风送滕王阁)." When it comes to John Lee’s rise, this “timing” refers to Beijing’s thinking and plans to drop its illusions and prepare to fight with the US and the West.

Related: The fight against Omicron reveals Hong Kong’s disunity | What's missing from Hong Kong's anti-epidemic fight? | Overhaul of Hong Kong's electoral system: Is it still 'one country, two systems'? | Hong Kong must be governed by 'patriots'. So who are the ‘patriots’? | Will it be 'one country, one system' for Hong Kong?