The Chinese need to do better to counter misleading tweets from US President Trump’s Twitter propaganda machine, say China academics Li Yongning and Wen Jiandong. As controversial a figure as he is, Trump commands a Twitter following of more than 80 million. Some of his questionable tweets have likely contributed to the deterioration of people-to-people relations between the US and China. 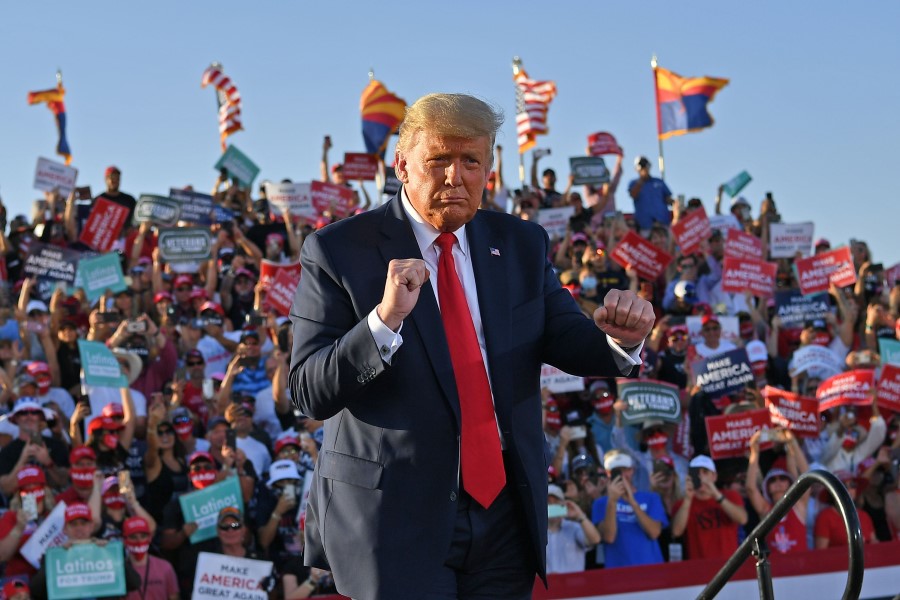 In this file photo taken on 19 October 2020, US President Donald Trump dances as he leaves a rally at Tucson International Airport in Tucson, Arizona. (Mandel Ngan/AFP)

Candice Chan - 30 January 2023
A mall in Shenzhen came under fire for putting up white lanterns with black text as part of its Chinese New Year decorations, while an “ugly” rabbit-shaped light decoration was removed from another mall in Chongqing. Academic Zhang Tiankan muses on tradition and innovation, and the evolution of traditional decorations.
Read more
Translated by Candice Chan on 28 October 2020

A survey of 14 countries by the Pew Research Center between 10 June and 3 August shows a significant increase in unfavourable views of China among some Western countries. In September, a well-known Japanese pianist was beaten up by eight youths in New York, presumably being mistaken for a Chinese, while some young children in the West call the coronavirus the “Wuhan virus”.

The signs are there that since the trade war began, and especially since the pandemic broke out, despite China giving in several times in the trade war and its enormous sacrifices during the pandemic in providing help to the international community, its image has suffered among some Western countries.

The West is still unfamiliar with China. In 2019, only 31.9 million foreign tourists came to China, with only 30% from developed countries like Japan, Europe, and the US. And so, many Westerners know China indirectly. Most mainstream Western media want to be objective and fair, and are usually not overtly biased in their reports. In contrast, US President Donald Trump has a very effective publicity machine called Twitter, which has done a lot of damage in smearing China.

Trump’s Twitter account has 80.2 million followers. Given his global influence as president of the most powerful country in the world, his penchant for unexpectedly creating news, and the global reach of the English language, Trump’s global reach on Twitter is greater than any propaganda group.

Most Westerners get US and world news on Twitter as it breaks. The timeliness, spontaneity, and veracity of the news about Trump on Twitter goes beyond Associated Press wire reports or White House press conferences. Since the trade war, and especially since the pandemic, Trump has sometimes complimented China, but in vague terms and with no details. For example, in 2018, Trump tweeted: “President Xi and I will always be friends… Great future for both countries!”

Trump’s meshing of truths, untruths and half-truths on Twitter actually makes what he says more believable.

However, mostly it has been specific accusations, such as China stealing US intellectual property and unfairly growing the US trade deficit, and the “Wuhan virus”. Trump’s black-and-white approach has added to the deceptiveness of his comments, especially for his “fans” and those who have little contact with China and know little of it, leading to a drop in goodwill and trust between the Chinese and Americans.

While Trump’s maverick personality and approach has had a great impact on global sentiment, he only has a chance to stand out because the rest of the world’s politicians generally do not show what they think and feel.

In 2012, former President Barack Obama was top among global leaders with 17.1 million Twitter followers, but seldom expressed emotional political views or personal criticisms of others on Twitter, which makes Trump the “unofficial, undisputed king” of world heavyweights in his monopoly of global sentiment and stirring global nerves.

A quote often attributed to Nazi propaganda minister Joseph Goebbels goes: “If you tell a lie big enough and keep repeating it, people will eventually come to believe it.” Trump’s meshing of truths, untruths and half-truths on Twitter actually makes what he says more believable. What Trump talks about, such as China-US relations and the coronavirus, are systemic issues that need to be seen from many angles to be understood. In China, there is a saying that one sees ridges and peaks depending on different angles (横看成岭侧成峰), while in the West there is also the anecdote of several blind people touching different parts of an elephant and not recognising the whole. And even as he is the US President who represents his country, given Trump’s extreme character, he tends to choose one angle and interpretation that benefits him, but which usually misleads the public.

Chinese pushback on Twitter strong, but not strong enough

Of course, in response to Trump’s propaganda and slander against China, Chinese foreign ministry spokespersons Hua Chunying and Zhao Lijian have started personal Weibo accounts that have helped to spread the word, but they cannot be compared to Trump’s tweets.

First, they are officials with less global influence than Trump, and taking him on is like trying to kill an ox with a small knife meant for chickens (杀鸡刀宰牛); second, their grasp of the English language and Western culture does not compare with Western society; third, for various reasons, they are more critical than approving of the West, which makes them less credible. Global Times editor Hu Xijin has been more successful in raising his credibility, with his sharp words and caustic opinions, but he is still an individual of much lower international status.

Media audiences have also shifted from traditional print media to young people who grow up immersed in multimedia. They do not like long, preachy sermons, but prefer fresh formats such as short and sharp essays, cartoons, and video clips. Celebrity accounts on Twitter, WeChat, and Weibo have become a form of publicity that has overtaken traditional media.

Congress should request that he keeps separate Twitter accounts as president to advocate American beliefs, spirit, and government initiatives, and as a citizen to showcase his personality and temperament.

In recent years, some celebrities have gained an amazing number of followers — Xie Nan, the host of entertainment show Happy Camp, has 126 million followers. TV personality Cui Yongyuan has more followers than People's Daily; his exposé of movie star Fan Bingbing's contractual issues rocked the country. Advertisements featuring Gree Electric chairperson Dong Mingzhu got good results. It is now the trend for stars to livestream to market products — actress Liu Tao had 20 million viewers on her first livestream, with sales of over 148 million RMB.

Keeping the presidential and the private separate

One might say the deterioration of relations between the Chinese and Americans is to a large extent the result of Trump's personal propaganda machinery. Such a downward slide in relations is an outcome that rational people in both China and the US do not want. Trump's unbridled Twitter campaign has also seriously damaged the image of the US.

In the battle of words between China and the US, Trump is using 21st century new media as his weapons, while China is still resisting with traditional media.

Western culture believes in personal freedom, but those who hold public authority should draw a strict line between their official role and that of a citizen. German Chancellor Angela Merkel is a model of this. As the chancellor, everything she says and does represents Germany; while she can have her say, she has to be careful with what she says. The citizen Merkel has her ups and downs and petty rants, but she does not allow that to make the news.

And so, in whatever time Trump has left as president, Congress should request that he keeps separate Twitter accounts as president to advocate American beliefs, spirit, and government initiatives, and as a citizen to showcase his personality and temperament.

China does not take Trump’s powerful Twitter propaganda machinery seriously enough. In the battle of words between China and the US, Trump is using 21st century new media as his weapons, while China is still resisting with traditional media. It is as if the US has their big generals rolling up their sleeves and taking to the battlefield, while China is only sending their field officers to shout at the opponents from a distance. Trump’s tweets are emotive and well-timed to make the news, while China’s propaganda is stilted and monotonous, featuring the same slogans. The US is using politicians to play the propaganda game, while China is playing a political game at the expense of news freedom.

Of course, some people feel that China should also have the confidence of a big country. Even as the West ramps up negative comments on China, China is doing the same in response vis-à-vis some Western countries. However, we are all members of the global village and we do not seek a zero-sum game. What we want is a win-win between China and the US, and for that we need Chinese and Americans to come together in trust and cooperation, to take on the issues of climate, disease, food, and poverty that our great earth is facing.