Will China plunge into a food crisis? Officials say no

As the Covid-19 pandemic slows down in China, the panic-buying frenzy goes on. Chen Jing reports on people bulking up on supplies across China amid fears of a looming food shortage. 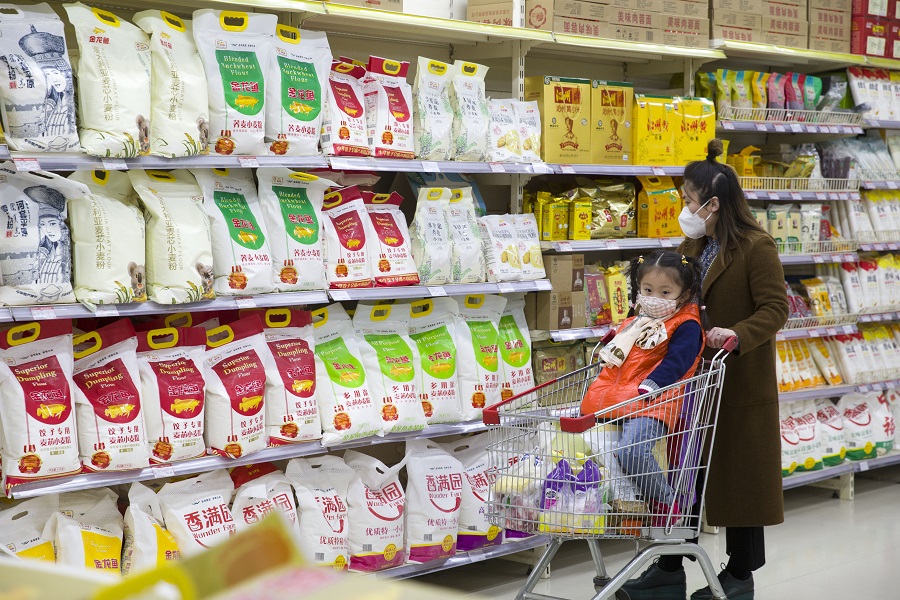 In this file photo, a consumer is choosing flour at a supermarket in Taiyuan city, Shanxi province, China. Chinese officials have repeatedly reassured the Chinese people that food supplies are sufficient and there is no need to hoard. (CNS)

Grace Chong - 13 May 2022
Despite the decline in daily new Covid-19 cases over the past week, Shanghai has seen stricter anti-epidemic controls implemented to the point of absurdity. Zaobao correspondent Yang Danxu highlights the stranger-than-fiction happenings in Shanghai that have sparked public outrage and shaken people’s confidence in China’s zero-Covid policy.
Read more
Translated by Grace Chong on 7 April 2020

28-year-old Chongqing resident Wang Lu has once again tried to stop her parents from snapping up sacks of rice at the supermarket — the second time this year that the family has argued over whether there is a need to hoard food supplies.

Following the frenzy, the price of rice has risen in some regions and various food industry stocks prices have increased.

Not knowing whether to laugh or cry, Wang told Lianhe Zaobao during an interview that her parents had hauled sacks of rice home in February this year, as they were worried that the Central Asian locust plague would reduce rice production.

“Recently, they heard that a few countries are restricting rice exports and wanted to stock up on sacks of rice again. But we haven’t even finished half of the rice that they bought earlier. I told them that China has a sufficient supply of rice but they are still worried,” she lamented.

Apart from Chongqing, other provinces like Hubei, Zhejiang, and Gansu have also witnessed a food-buying frenzy over the past week. Photographs that netizens shared on Weibo showed rows of empty rice bins. Someone even stocked up on 50 sacks of rice at one go.

Following the frenzy, the price of rice has risen in some regions and various food industry stock prices have increased. Taking the lead position is the JinJian Cereals Industry, whose stock price doubled after hitting its "limit up" threshold eight times over the last ten trading days.

To stop the spread of panic and anxiety among the masses, various officials from departments like the Chinese Ministry of Agriculture and Rural Affairs, the National Food and Strategic Reserves Administration, and the Ministry of Commerce, have repeatedly advised people to not go into a panic-buying mode. They assured them that China’s food supplies have not been affected by the Covid-19 pandemic whether in terms of production, reserves, crop conditions, or processing procedures.

Reserves can last for more than a year

State media Xinhua News Agency also interviewed agricultural expert Yuan Longping, who is fondly nicknamed the “Father of Hybrid Rice” for his work on developing hybrid rice strains, on 5 April, in a bid to further calm the public. Yuan told Xinhua that China is completely self-sufficient in its food production and will not plunge into a food shortage, and that "there is no need for people to be worried”.

At present, its (China's) rice and wheat reserves can satisfy the market consumer demand for over a year, with annual imports of grains only taking up roughly 2% of China’s grain consumption volume.

Wei Baigang, head of the Ministry of Agriculture and Rural Affairs’ Department of Development and Planning, emphasised on 4 April at the press conference of the Joint Prevention and Control Mechanism of the State Council that China’s rice production was plentiful and its reserves were adequate. He added that the country has comprehensive measures to control rice prices and that there was no need to resort to panic buying and hoard supplies. “It is better to eat food prepared with fresh ingredients,” he said.

China is the world’s largest producer and consumer of food supplies. Wei said that China’s food yield has been maintained at over 1.3 trillion catties (650 billion kg) for five consecutive years. Last year, its food per capita was well over 470 kg, which is way more than the international standard of 400 kg. At present, its rice and wheat reserves can satisfy the market consumer demand for over a year, with annual imports of grains only taking up roughly 2% of China’s grain consumption volume.

The agricultural product that is most vulnerable to external factors is soybeans as 83% of it is imported and over half of it comes from the US.

Qin Yuyun, an official with the National Food and Strategic Reserves Administration said at the same press conference that China has not touched its central reserves since the Covid-19 pandemic broke out. The majority of regions have not utilised local reserves as well, and most ready-to-eat food markets of various cities are able to supply over 30 days of food.

Over 98% of food produced domestically

Wang Bin, deputy director of the Ministry of Commerce’s department of market operation said at a press conference on 2 April that this year’s food production trend was generally positive. Crop conditions are better than normal days and “it is highly possible for a bountiful harvest all year round”.

In terms of food processing, Wang Hong, a department director with the National Food and Strategic Reserves Administration, analysed that the work resumption rate of food processing industries has reached 88.2% and is able to process 962,000 tonnes of wheat and rice on a daily basis, enough to feed the entire population of 1.4 billion for more than a day.

Professor Chen Bo of the Huazhong University of Science and Technology told us during an interview that over 98% of the rice and corn that China needs is self-produced. The agricultural product that is most vulnerable to external factors is soybeans as 83% of it is imported and over half of it comes from the US. According to the China-US phase one trade agreement signed early this year, China is required to import more agricultural products from the US, which in turn ensures that China’s soybean supplies would not be affected. He said, “In general, panic over food security is unfounded.”

According to an article by Professor Yu Xiaohua, chair of the University of Göttingen’s Agricultural Economics in Developing and Transition Countries, although various countries like Vietnam and Kazakhstan have restricted rice exports, major countries for food exports such as the US, Brazil, and Canada have not restricted their exports. Thus, it is unlikely that China will plunge into a food crisis. However, he reminded governments to control the spread of its people’s anxiety and suppress the capital market from being hyped up to avoid the recurrence of past incidents where garlic and ginger prices skyrocketed as a result of a market hype.

Related: China held its own in phase one trade deal? | The impact of Covid-19 on the agriculture sector in China