During the 2008 Summer Olympics, Beijing opened its doors and embraced the world to the Olympic countdown song of Beijing Welcomes You, showing its bashful sincerity and mustering its courage to take the first step in the hope of being accepted as a member of the international community. But 13 years later when it is set to host the Winter Olympics, it seems to be shutting its doors to the outside world. Is this simply due to pandemic containment measures alone? 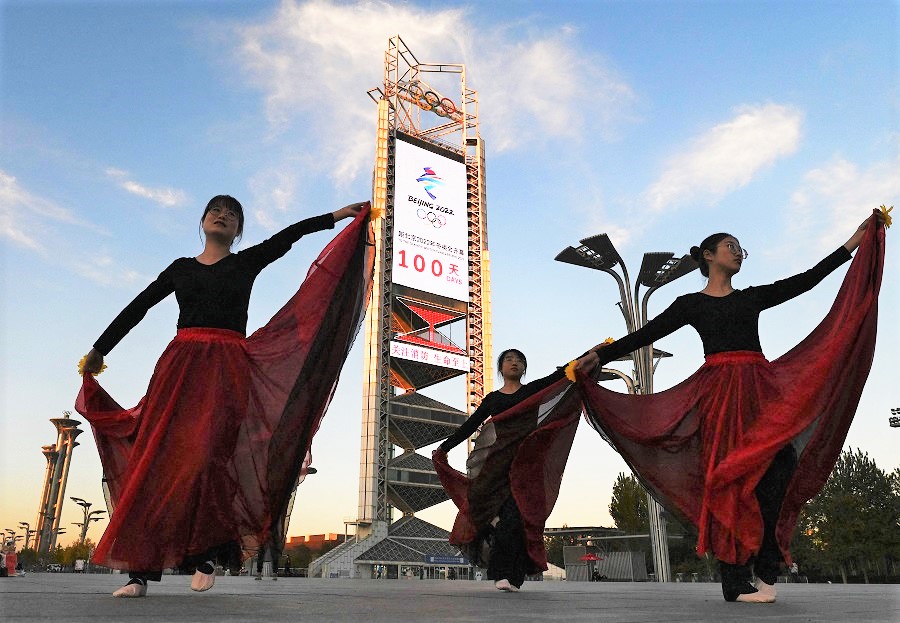 Dancers perform in front of the countdown clock showing 100 days until the opening of the 2022 Beijing Winter Olympics, at the Olympic Park in Beijing, China, on 27 October 2021. (Noel Celis/AFP)

Grace Chong - 29 September 2022
China's central bank is scrambling to increase demand for borrowing by using nearly every instrument in its toolbox. But the impact has so far been limited, as Chinese companies and households are trapped in a crisis of confidence in the economy amid slowing growth and the impact of strict anti-Covid measures. What more can China do to save the economy?
Read more
Translated by Grace Chong on 1 December 2021

I have not been back home for nearly two years since the outbreak of the Covid-19 pandemic. I finally decided to do so this December but now that the new and dangerous Omicron variant is spreading, my holiday plans are shrouded in uncertainty again.

I met up with a few of my Singaporean friends last weekend. When they heard that I was planning to return to Singapore, their eyes widened. “Are you sure?” they asked.

China strictly roots out imported Covid-19 cases and has put in place strict regulations for passengers entering China. These include a closed-loop management system before departure, several nucleic acid and serum antibody tests, quarantine and medical observation upon arrival, and health monitoring. The complexity of the whole process is shocking to say the least.

Now that the Omicron variant has appeared, China’s entry restrictions could change in an instant, creating even more uncertainty. My friends gently reminded me that the next two to three months would be “the most difficult time to enter Beijing”.

Since the outbreak of the Covid-19 pandemic, Beijing has adopted the strictest Covid-19 restrictions. Few international flights can fly directly to Beijing and foreign passengers wanting to enter Beijing must complete their quarantine at another city before they are allowed to enter the capital. Over the past two years, China’s foreign affairs activities were also held in cities outside of Beijing.

As the Beijing Winter Olympics countdown begins, the capital’s Covid-19 containment measures are of top priority from now until February next year.

The authorities put in place strict new Covid-19 entry restrictions in Beijing on 17 November. All visitors must now show a negative nucleic acid test result from the past 48 hours, while visitors with a travel history in a county (county-level city, district, banner) where one or more confirmed local cases are found within 14 days are strictly barred from entering Beijing. Beijing could be said to be on high alert and building a fortress around the capital to prevent the virus from infiltrating Beijing so that the Winter Olympics will go on as planned.

...a Beijing that is on high alert indeed makes the outside world feel that they are not welcome in Beijing. The containment of the pandemic is probably just one of the many reasons for this situation, especially to the world outside of China.

At the gathering, a friend playfully hummed the familiar refrain "Beijing welcomes you" from the Olympic 2008 countdown song Beijing Welcomes You (《北京欢迎你》) to “Beijing does not welcome you”.

When Beijing hosted the Summer Olympics in 2008, the entire country was looking forward to this grand sporting event. Beijing Welcomes You became a popular song that everyone sang.

My door is always open, embracing the world with open arms,

As vast as the heavens and earth, we are all friends, there is no need for any formalities.

These sincere lyrics extended a warm welcome to Olympic guests and reflected China’s sincere intention to embrace the world with open arms.

13 years later, Beijing is set to become the first city to host both the Summer and Winter Olympics. But as the Olympic flame is about to be lit once again in Beijing, I feel familiar yet strange at the same time while listening to Beijing Welcomes You.

Whether it is to people in other Chinese cities, or to the world outside China, a Beijing that is on high alert indeed makes the outside world feel that they are not welcome in Beijing. The containment of the pandemic is probably just one of the many reasons for this situation, especially to the world outside of China.

A recent report in Chinese state media Global Times aimed at US politicians does give off the "Beijing does not welcome you" vibe.

The report quoted a source familiar with the Beijing Olympics saying that China has not invited US politicians to attend, nor are there currently any plans to do so. And given the severity of the pandemic around the world, it would not be appropriate to invite foreign guests on a large scale and increase the risk of spreading the virus.

The person quoted by Global Times represents the attitude of the Chinese authorities: if the host does not extend an invitation, is it not presumptuous for those who are not invited to make noise about a boycott? This person even said mockingly that the Beijing Olympic Games may be “more extraordinary” without these politicians.

So far, the only invitee who has confirmed attendance at the opening ceremony of the Beijing Winter Olympics is Russian President Vladimir Putin. No one knows who else is on Beijing’s guest list, and we will have to wait until 4 February to see which other countries’ politicians will make an appearance.

While it objects to decoupling and emphasises “taking down walls”, it has also set up high walls in the online world, and separated itself from the world with its strict pandemic measures.

13 years ago, China opened its doors and embraced the world, showing its bashful sincerity and mustering its courage to take the first step in the hope of integrating into the international stage and being accepted as a member of the international community. Following 13 years of growth in its economy and national strength, China is no longer what it used to be. It is very confident in itself, and may turn up its nose at having to open up in order to integrate with the outside world.

These changes are due in part to external factors. China’s rise has upset the previous geopolitical balance, while a complex external environment is putting China under pressure. As a rising power, it suffers wariness and suspicion; on its part, its own actions make others uneasy. It is no longer humble, but has become aggressive, and confident about everything. While it objects to decoupling and emphasises “taking down walls”, it has also set up high walls in the online world, and separated itself from the world with its strict pandemic measures.

China is confidently marching to its own beat. The Winter Olympics in February will probably be a spectacle, and it will not lose its lustre because of the calls for boycott. But will a Beijing that no longer welcomes the world gradually grow more distant from us?

Related: Will the West boycott Beijing's Winter Olympics over Xinjiang? | China has a zero-Covid policy. Can it pull off a spectacular Winter Olympics? | ‘Countering sanctions with sanctions’: Where China’s confidence comes from