After ten years of living in Shanghai and seeing the rapid changes to the city, Egyptian-American architect Hisham Youssef takes us on a nostalgic and personal photographic tour of the lanes and neighborhoods that, until very recently, stood in the city he now calls home. 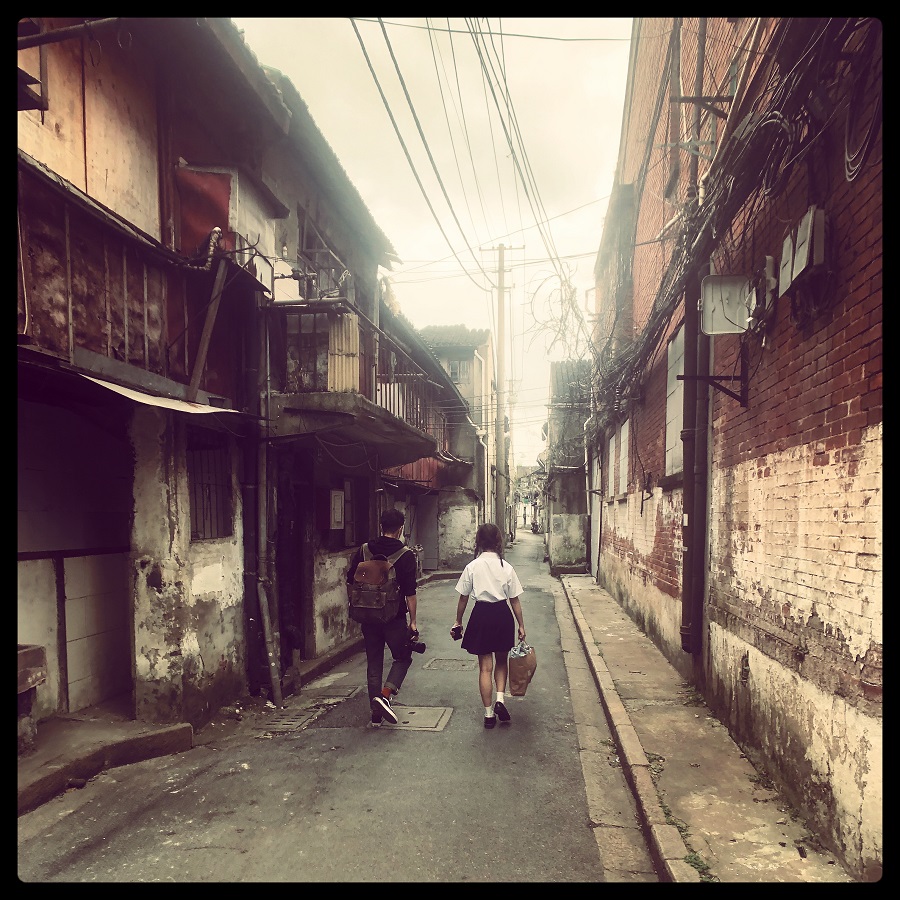 Boy and schoolgirl walk through a boarded-up neighbourhood in Laoximen.

Grace Chong - 27 January 2023
Regulators are ramping up efforts to cull poorly performing firms and those that violate the rules or break the law. A record number of companies got the boot from Chinese mainland stock exchanges last year, and that number could even double in 2023.
Read more
Translated by Grace Chong on 25 March 2021

Shanghai is an overwhelming city. A city of extremes, at once large yet small, it is a veritable cacophony of the sounds, smells and scale of its people and architecture. And for an architect and a photographer like myself, it is a great place to get lost in its many lanes (里弄, also called lilong or longtang) and markets, the very fabric that is Shanghai. It is in these lane neighbourhoods that life happens in Shanghai. But alas all this is disappearing; indeed much of the older parts of the city which occupied valuable land for development have been replaced without a trace. Modern blocks of hotels, residences and commercial outlets now rule the city.

I arrived in Shanghai in early 2011. Little did I know then that I would stay for ten years. I had been on a brief business trip to the city in 1996, but the changes that I noticed in 2011, on the drive in from the airport, were staggering. The city was undergoing a lot of change. It was unrecognisable in 2011. I recall being excited yet overwhelmed by the sheer scale and vastness. The only way, I thought, to conquer the city was to do what I always did since I was a boy growing up in Cairo — walk the streets. I have always lived by this mantra: “Travel where you live; live where you travel.” Apart from travelling to new cities or new countries, I find that the best way to discover a place where one lives is to walk the street with the curiosity of a first-time tourist.

As time passed, my effort to photograph became more deliberate; I was walking through more of the city, intent on seeing it before it disappeared. What started as a process of discovery became an obsession.

I recall my first weekend in the city, armed with a map in hand. I took the metro to a distant station and walked aimlessly heading back in the general direction of home. I snapped a few pictures as one would on a first walk in new surroundings. I was not interested in landmarks or tourist attractions. I wanted to see the ordinary that made up everyday life: the markets, people, street life. What I did not realise at the time was that, sadly, so many of the places and faces in my pictures would no longer be there. As time passed, my effort to photograph became more deliberate; I was walking through more of the city, intent on seeing it before it disappeared. What started as a process of discovery became an obsession.

At its peak, much of Shanghai’s downtown area was made up of residential lane neighbourhoods or lilong. Most appear to have been built in the 1920s, evidenced by the date carved on the entrances to these blocks. They were a microcosm of a city. In the larger ones, residents could find their entire daily household needs: there were convenience shops, public baths, community centres, produce markets, fermented rice drink (白酒 baijiu) shops, and various other local delicacy shops and stalls — they offered a cornucopia of foods from across China. This was because many of the residents were migrants from other provinces in China. I used to go to several of my favourites in Laoximen (老西门, lit. Old West Gate), one that served delicious Chongqing noodles (重庆小面 Chongqing xiaomian), another that had flavoured roasted sunflower seeds, and yet other stalls serving different crepes (煎饼 jianbing).

In the past, some neighbourhoods were as large as modern city blocks, with a labyrinthine system of lanes, with mostly three- to four-storey low-rise attached residences. It was in these neighbourhoods that I spent a good part of my time in Shanghai walking various lanes in most of the old districts of the city such as Hongkou (虹口), Zhabei (闸北), and many more.

To be sure, the living conditions were far from ideal with makeshift non-permitted additions, interior divisions to accommodate more residents, a lack of sanitary facilities, overcrowding, and dark and dank spaces. And yet, there was a unique feel in these lanes — a buzz of life; a patina of the layers of time; an entrancing energy of the people. There was a truly palpable sense of community. In fact, there was no escaping proximity to others who live in the same neighbourhood, what with the density of the living quarters and the narrow lanes. One could see entire families, babies and the aged all there. Tight spaces condense activities. And with running water and communal sinks on the outside of the dwellings, their entire lives unfolded in the lanes: washing up after the day’s meals, playing, studying, visiting neighbours, simply whiling time away, or even bathing. Simple pleasures.

Residents have little time to leave, with their lives upended. There are the occasional holdouts, but ultimately they are forced to be evicted. Resistance is futile.

Sadly as the time drew near to eviction mandated by the city, one sensed an air of resignation in people’s eyes. One of impending fate. Building windows, doors or any means of entry were blocked with grey cement blocks or the signature red painted wood panels. Doors were sealed with official notices, under punishment for those who broke the seal to re-enter. Some residents who had not yet left could still be seen sitting guard at their properties in futile defiance. Across the street in another lane neighbourhood, the mood seemed almost in denial of what happened to their neighbours, but everyone knew it was inevitable. This was all happening in the shadow of tall 20- or 30-storey luxury residential or office blocks, surrounded by cranes with an insatiable appetite for new construction.

The photographs posted on these pages are of places that no longer exist. I made sure I visited regularly to observe the stages of dismantling of these areas. The process of eviction and demolition is swift — notices are served, buildings get marked with a red character for demolition "拆" (chai). Residents have little time to leave, with their lives upended. There are the occasional holdouts, but ultimately they are forced to be evicted. Resistance is futile.

“…I am so happy we moved. Our new apartment is large; has lots of light, a bathroom and a kitchen…” - relocated Shanghai resident

To be fair, the government compensates all evicted residents in kind or financially. This means that evicted residents relocate to suburbia, far from their place of work. Many, however, are happy with their new apartments, but others of the older generation lament the loss of community and proximity to their neighbours. Understandably these poor neighbourhoods occupy valuable real estate and it makes financial sense to replace them with modern developments, in a fair process. Nonetheless, the city loses a part of its historical soul and heritage.

To know where one is yet feel lost, is a very disorienting feeling.

To know where one is yet feel lost, is a very disorienting feeling. Streets no longer exist, familiar stores and markets are gone, never to return, all of them replaced by seemingly foreign or out of place generic contemporary architecture. There is a neologism I came across recently that aptly captures this feeling, “Solastalgia”, coined by Australian philosopher Glenn Albrecht, is the state of feeling homesick while still at home. The pace of development increased considerably since my arrival in Shanghai; the plans were years in the making following the Shanghai Expo in 2010. New mixed-use developments sprouted out of the rubble of fallen communities. Many of the old neighbourhoods in the central areas of Shanghai have been razed by the blockfuls and with them the occupants, the markets, and way of life — all a lens into how things used to be — never to be seen again.

It is hard to argue against the need to develop new projects to meet the needs of one of the major global metropolises such as Shanghai. As an architect, I am fully cognisant of the need for renewal and progress. Indeed the very neighbourhoods that have been demolished were themselves “modern” at the time of their building as the city undertook a “modernisation” plan in the early 20th century. As a resident of Shanghai, I can’t help but walk through the few remaining neighbourhoods with a great sense of nostalgia, knowing what will become of them in a future where all I'll have left are the memories in my photographs.

Related: Architects Mok Wei Wei and Chang Yung Ho: Imagining and building a humane city | If they don’t care about it, tear it down | Liu Thai Ker and Ke Huanzhang: Urban planners are servants of the city | A dialogue with John Clang and Zhou Yang: Human relations, memories and the compassionate photographer