US academic Zhu Zhiqun says that factors such as history, education and divisiveness within the Asian community have led to the persistence of anti-Asian racism in the US. This trend looks to continue unless Americans realise that every American has an immigrant past, and protecting the rights of Asian Americans is doing so for all Americans. 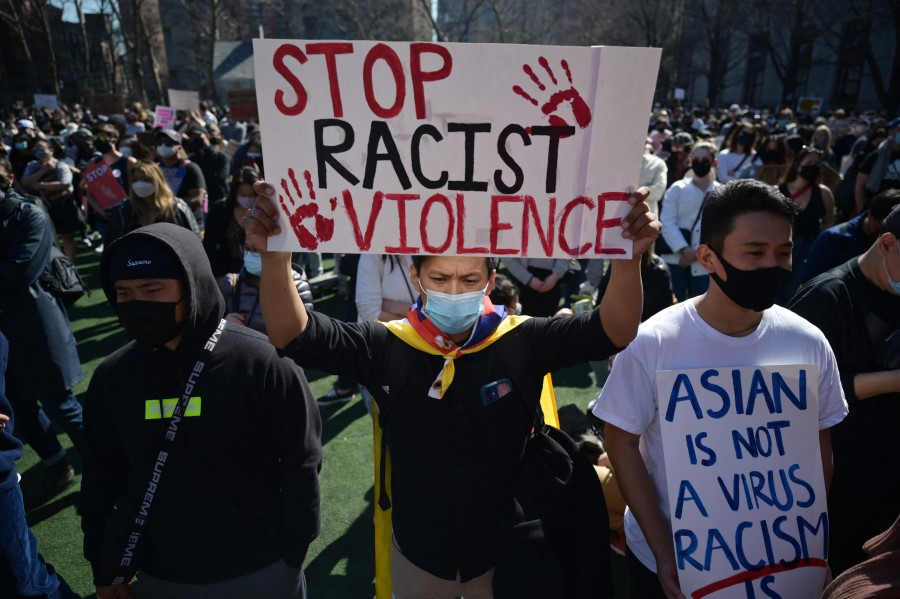 Members and supporters of the Asian-American community attend a "rally against hate" at Columbus Park in New York City on 21 March 2021. (Ed Jones/AFP)

Candice Chan - 23 November 2022
Zaobao journalist Miao Zong-Han takes a closer look at voter fatigue in Taiwan in the upcoming “nine-in-one” elections, caused mostly by the arguing over plagiarism allegations, which might interest the highly educated but bore the average voter. Another question is whether the atmosphere at these elections will be a good indicator of things to come in the 2024 general election.
Read more
Translated by Candice Chan on 6 April 2021

Racist violence and rhetoric against Asian Americans and Pacific Islanders (AAPI) have been rising at an alarming rate in the US. Recent anti-Asian hate crimes, including the death of six Asian Americans in Atlanta spa shootings on 16 March 2021, call into question why anti-Asian racism has persisted in America.

AAPI groups, joined by people of other racial backgrounds, have gathered in communities across the US to denounce hate crimes.  However, combating racism in general and racism against Asian-Americans in particular will be a long and difficult journey.

First of all, anti-Asian racism is deeply grounded in American history and American society.

Anti-Asian racism did not start yesterday. In the second half of the 19th century, Chinese immigrants were first welcomed as labourers in gold mining and trans-continental railway construction. Soon they became the targets of racism as economic conditions worsened. Major anti-Chinese violence included the lynching of Chinese in Los Angeles in 1871 and mass killings of Chinese in Rock Springs, Wyoming by white mobs in 1885. The Chinese Exclusion Act of 1882, passed by US Congress and signed by President Chester A. Arthur, prohibited Chinese labourers from entering the US. This was the first and the only racist legislation that prevented all members of a specific ethnic or national group from immigrating to the US. Chinese immigrants were blamed for depressed wages and rising unemployment and were considered carriers of disease.

Following Japan’s attack on Pearl Harbor, about 120,000 Japanese Americans were incarcerated in concentration camps between 1942 and 1946 by President Franklin Roosevelt’s executive order. Even American leaders could not make a distinction between a foreign government and US citizens of foreign descent.

In June 1982, Vincent Chin was beaten by two white men in Detroit at a time when the Japanese auto industry became highly competitive. Like today’s China, Japan was viewed as a threat to America. Chin, a Chinese-American, was assumed Japanese and fatally attacked by the two laid-off autoworkers.

Anti-Asian racism began to rise again recently, coinciding with Trump’s election in 2016. Trump repeatedly incited racism across the board, infamously calling Mexican immigrants “drug dealers, criminals and rapists”. He propelled anti-Asian racism by making hateful and irresponsible comments such as “Kung Flu” and “Chinese virus” during the pandemic. Whenever he used those racist slurs in rallies, his supporters always responded with cheers, and Trump received nearly half of all legitimate votes during the 2020 election.

One of the most frequently used and most offensive racist insults against Asian Americans is: Go back to where you came from! These people do not realise that except native Americans, everybody in the US is an immigrant or a descent of immigrants.

A failure to educate

The US is a melting pot with people from all parts of the world, but it was the English and other Europeans who began to arrive and settle down first in the early 17th century, exploiting and killing Native Americans in the process. For a long time, White Anglo-Saxon Protestants (WASPs) dominated American economy, politics, education, culture, and pretty much every other aspect of American life.

One of the most frequently used and most offensive racist insults against Asian Americans is: Go back to where you came from! These people do not realise that except native Americans, everybody in the US is an immigrant or a descent of immigrants. America is home to all its citizens. When you tell Asian Americans to go back, you might as well tell yourself to go back to Europe, or Africa, or Latin America, or wherever your immigrant forefathers came from.

Due to inadequate history and civic education, many Americans consider Asian Americans foreigners or second-class citizens. There are also enduring stereotypes about Asians and Asian Americans, such as Asians are good at math, they eat dogs, and they are bad drivers, etc.

AAPI accounts for over 6% of the total US population, but they only account for 2% of the Senate and 3% of the House of Representatives in the 117th US Congress.

Asian Americans are the fastest-growing minority group in the US. Eligible Asian American voters have doubled since 2000. AAPI accounts for over 6% of the total US population, but they only account for 2% of the Senate and 3% of the House of Representatives in the 117th US Congress.

Asian-Americans have long been viewed as a “model minority” working hard and not making trouble or getting involved in politics. Encouragingly, AAPI are becoming more vocal and more actively involved in politics now. In the recent spate of anti-Asian racism, many Asian American members of Congress, such as Grace Meng (D-NY), Ted Lieu (D-CA), Young Kim (R-CA) and Michelle Steel (R-CA) have spoken out condemning hate crimes and racism.

Grassroots groups such as Stop AAPI Hate have been formed to track and raise awareness of incidents of discrimination, hate and xenophobia against AAPI. As Phil Ting, assemblyman of the California State Assembly, noted, “We can’t solve a problem without knowing how big it is.” Ting helped secure US$1.4 million in California state funding in February 2021 to help combat anti-Asian violence and racism through the Stop AAPI Hate reporting center.

Fourth, Asian Americans are not a monolithic group and are not always united.

Asian Americans hail from almost 50 countries, and if Pacific Islanders are included, AAPI covers over 70 different national backgrounds. On some issues, Asian Americans may find themselves in opposing camps. For example, Chinese Americans from the Chinese mainland, Hong Kong or Taiwan may hold totally different views regarding US policy toward China. There are also vast differences in languages, cultures, income levels, foods, and even facial features between East Asians and South Asians.

“Asian Americans” is a huge umbrella under which people may not identify with each other or support each other. Sery Kim, a former Trump administration official and Korean American candidate vying for the Republican nomination in the race to represent Texas’ 6th Congressional District, said at a recent forum while responding to a question about the US immigration crisis, “I don't want them here at all,” referring to Chinese immigrants. “They steal our intellectual property, they give us coronavirus, they don’t hold themselves accountable.” “And quite frankly, I can say that because I'm Korean,” she added. Kim has been widely condemned for her insensitive and erroneous remarks but she has refused to apologise so far. At a time when all AAPI should stand in solidarity, such divisive and self-righteous comments are hurting the anti-racism cause.

There are no cookie-cutter Americans. Asian Americans have been part of the American family. Racism against one group is racism against all.

Finally, racism in America raises fundamental questions about American identity. Who are Americans?

There are no cookie-cutter Americans. Asian Americans have been part of the American family. Racism against one group is racism against all. To fight for the rights of AAPI or any other minority groups is to defend and preserve American democracy and diversity.

Combating racism in America is not the exclusive work of some groups. It is mandatory to ensure the well-being of all Americans. Countering racism provides all Americans with a soul-searching opportunity to learn about America’s past and build a common future.

Given the long history of racism in America and the complexity of contemporary politics and economics, it is impossible to wipe out racism in American society in the near future. In fact, in the midst of a global pandemic and intensifying US-China rivalry, racism against Asian Americans is likely to grow. Just like gun violence, racism is a political virus and social ill that Americans may, unfortunately, have to live with.

However, one should also keep in mind that the US remains an open society. All these political and social problems are publicly debated and discussed. Despite all the challenges, the US remains an immigrant country, where realising the American dream through hard work is still possible.

Related: Anti-Asian hate crimes: Chinese Americans' weak and disparate voice in US society | Where multiple 'gods' co-exist: Countering the racism complex in Western diplomacy | From ‘yellow peril’ to sinophobia | Us and them: Lessons from ancient China about demonising 'enemies'