Cai Daolu of the NUS Business School says that the Comprehensive Agreement on Investment (CAI) between China and the EU can help to reduce uncertainty and facilitate the flow of investment, technology and know-how across borders. In fluid times, good old-fashioned economic integration and openness to foreign direct investment are just the booster shot that the world economy needs. 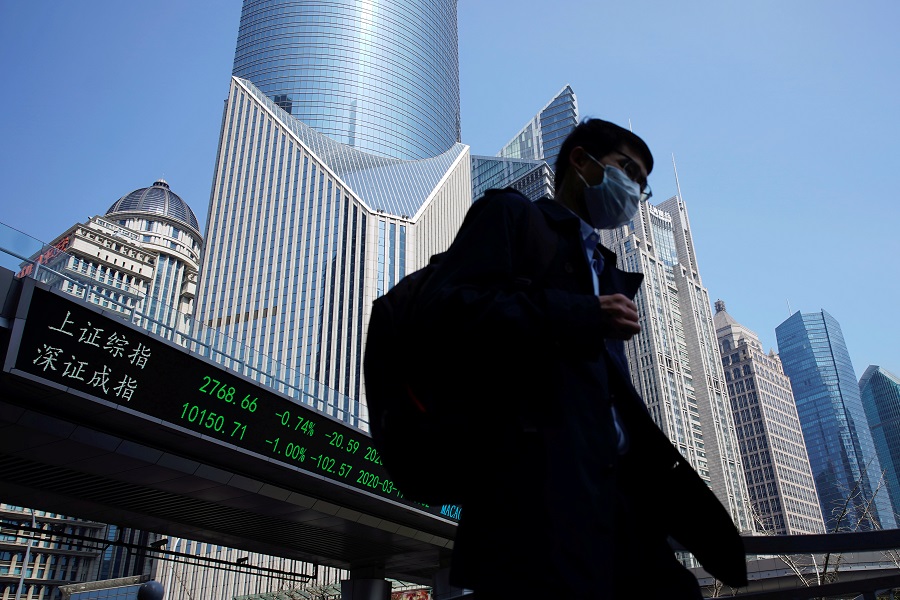 A pedestrian wearing a face mask walks near an overpass with an electronic board showing stock information, at Lujiazui financial district in Shanghai, China, 17 March 2020. (Aly Song/File Photo/Reuters)

Grace Chong - 30 January 2023
Amid ongoing tensions, a high-level visit by US Secretary of State Antony Blinken to China in the coming week shows hope for improved relations between the two economic powerhouses. Zaobao correspondent Yu Zeyuan notes that while the meeting may not produce practical results, it is a much needed exchange to manage and control China-US relations from worsening.
Read more
Translated by Grace Chong on 8 January 2021

While some parts of the world are “turning inward”, China has decided to reaffirm its commitment to trade and investment by deepening economic integration with the rest of the world through the Comprehensive Agreement on Investment (CAI) with the EU.

Importance of the China-EU investment deal

The CAI, which has yet to be ratified by both parties, will facilitate investments between the EU and China. If ratified, the CAI will help investors gain better access to these two economic powerhouses.

... China is sending a strong signal to the world about its commitment to openness in trade and investment.

Namely, the CAI will improve market access for European companies to the Chinese market by removing investment restrictions, including equity caps and joint venture requirements.

With the recent signing of the Regional Comprehensive Economic Partnership (RCEP), the world’s biggest free trade agreement, as well as the conclusion of the negotiations on the CAI, China is sending a strong signal to the world about its commitment to openness in trade and investment. In a world where many countries are increasingly preoccupied with their own domestic affairs, the CAI deal is a vote of confidence towards further global integration.

The ins and outs: China as a global investor

China’s capital inflows and outflows have increased rapidly during the past decades. Most of these capital flows come as a form of Foreign Direct Investment (FDI), which constitutes business investment by an entity of a foreign country.

In recent decades, China has been a major recipient of foreign investment. Since 2000, FDI inflows to China increased four times. Currently, China receives FDI of about US$235 billion, which is just US$30 billion shy of the US, which is the number one recipient.

Lately, China is growing as a major source of FDI to the rest of the world. FDI outflows from China, from initial minuscule levels in the early 2000s, has increased 25 times in recent years. The International Monetary Fund reported a US$4.6 billion FDI outflow for China in 2000. In the past two years, the outflow of FDI for China has surpassed a whopping US$100 billion per year. Today, China is among the top five major FDI investors in the world.

Undoubtedly, China today is important not only in terms of trade in goods and services, but also as an important source of investment to the rest of the world.

Openness as a tool for global prosperity

Access to global investment is the dividing line that separates two worlds: one that is prosperous, with access to the world’s technology and increasing productivity and another that is poor, with obsolete technologies and falling productivity.

We saw a substantial increase in productivity in the six European countries that signed the Rome Treaty in 1957 to form what became the EU.

Furthermore, productivity in these countries caught up rapidly to US levels in the subsequent decades. In contrast, Switzerland, a country that did not join the treaty and never enjoyed the benefits of integration with the Union, saw a negative trend in their productivity levels when compared to its counterparts since 1960.

...openness to FDI is the channel through which a developing economy can catch up with a developed economy.

This is also true in other parts of the world. Several countries in Latin America implemented inward-looking policies that prevented further integration and became more protectionist in the flow of trade and investment. As a consequence, the share of Latin America’s exports in the world declined, poverty rates increased, and many economies suffered a prolonged and persistent low productivity level.

In contrast, Asia-Pacific economies, including China, have become increasingly more integrated over the past decades. As a result, standards of living increased while poverty rates decreased. Some Asian economies, namely the Four Asian Tigers (Hong Kong, Singapore, South Korea and Taiwan), even caught up with developed countries and became rich economies, and enjoyed a persistent increase in productivity levels.

The empirical evidence is clear: openness to FDI is the channel through which a developing economy can catch up with a developed economy.

Investment deals like the CAI can help to reduce uncertainty and facilitate the flow of investment, technology and know-how across borders.

Investment deal as a route for a global recovery

The past year has been a tumultuous year for the global economy. The global economy needs a boost of confidence to guarantee a smooth flow of goods and services, and investment.

To attract FDI, countries must have a conducive environment for businesses, set clear regulatory standards and implement legal transparency. Investment deals like the CAI can help to reduce uncertainty and facilitate the flow of investment, technology and know-how across borders.

Unlike the battle in the search for a vaccine for Covid-19, we do not need to reinvent the wheel this time to ensure a speedy global recovery. More openness creates opportunity; more integration creates stability and prosperity.

The opinions expressed are those of the writer and do not represent the views and opinions of NUS.

Related: Chinese academic: China-EU investment deal is of great strategic value to China | China has entered the 'gilded cage' of RCEP and is considering the CPTPP. What's next? | How China’s dual circulation strategy will affect the world economy | A reshuffle of global financial centres on the cards?