The US is leading a drive to seek accountability and compensation from China for losses and damages sustained due to the coronavirus. Economics professor Zhu Ying looks at whether these efforts will bear any fruit. 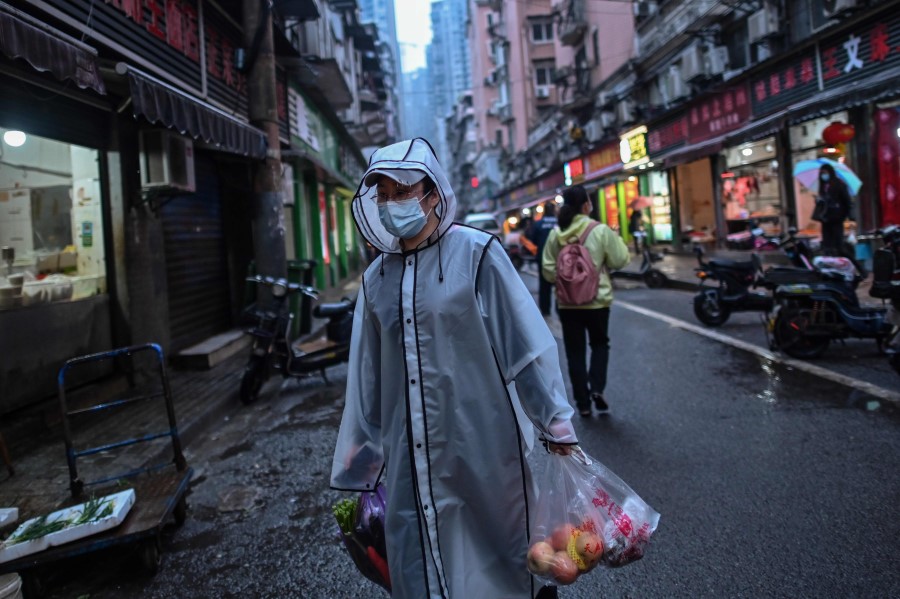 A person carries groceries in a neighbourhood in Wuhan, April 20, 2020. (Hector Retamal/AFP)

Candice Chan - 23 February 2021
Commentator David Ng explores the changes that are happening in China with developments in technology that allow vast changes in business models, from traditional offline transactions to online business, and “new retail”, which combines the two. How will the Chinese economy grow under these forces?
Read more

Candice Chan - 23 February 2021
The State of Southeast Asia 2021 survey published by the ASEAN Studies Centre at ISEAS-Yusof Ishak Institute indicates that Southeast Asians’ trust in China continues to trend downward. China’s success in containing the pandemic domestically, and its "pandemic diplomacy” in the region have had little effect on Southeast Asians' trust deficit towards Beijing, as they are anxious over China’s ability to constrain their countries’ sovereignty and foreign policy choices. ISEAS academic Hoang Thi Ha notes that this trust deficit undermines China’s “discourse power”, and Beijing would do well to consider recalibrating its approach to the region.
Read more
Translated by Candice Chan on 28 April 2020

China is currently in its biggest international public relations crisis since the establishment of the People’s Republic of China in October 1949. As of 28 April 2020, the coronavirus that started in China has infected over 3.04 million people and led to over 210,000 deaths, with 90% of those deaths in Europe and the US. Western countries, especially the US which has been hit hard, are angry.

As of 28 April, the US has seen over 980,000 confirmed coronavirus cases and more than 56,000 deaths. For comparison, the US lost 33,739 troops in the Korean War, 47,434 in the Vietnam War, 53,402 in World War I, and over 290,000 in World War II. In early April, White House Coronavirus Task Force response coordinator Dr Deborah Birx projected between 100,000 and 240,000 coronavirus deaths, the same as the number of US troop deaths in the Korean and Vietnam wars combined, almost the same as in World War II, and 14 times the number of US troop deaths in Iraq and Afghanistan.

US President Donald Trump has warned Americans to be prepared for “a hell of a bad two weeks”, as the US girds up to seek accountability from China. But the US is not going after China because it is where the coronavirus started, but because the Chinese government covered up the initial outbreak and suppressed information, misleading the world by not being transparent. Iran’s health ministry spokesperson Kianush Jahanpur called China’s official statistics a “bitter joke”, causing many around the world to think the coronavirus was like the flu, only with fewer deaths.

Wuhan mayor Zhou Xianwang said that about 5 million people left Wuhan before the lockdown, due to the Spring Festival and the outbreak. Figures show that between 10 and 22 January this year, the top three destinations for flights out of Wuhan were Thailand, Singapore, and Japan. This means that many people carried the disease far and wide.

Western countries assume that if the Chinese government had been more transparent in the early stages of the outbreak, it would have won valuable time for other countries. If the Chinese government had announced the news about human-to-human transmission, the world would have taken earlier action to restrict human movement, and the global pandemic would not be what it is now. On 22 April, US Secretary of State Mike Pompeo said the US believes China was not prompt with information, and even delayed a month before saying the virus could be transmitted between humans.

French President Emmanuel Macron said there were grey areas in China's handling of the coronavirus outbreak, and that “there are clearly things that have happened that we don't know about”.

The US is the leader in seeking accountability from China. Trump and other politicians are repeatedly expressing unhappiness over the cover-up by the Chinese government. On 18 April, Trump said China should face consequences if it was "knowingly responsible" for the spread of the novel coronavirus. He has also said his administration is looking to confirm whether the virus came from a virology laboratory in China, and questioned China’s fatality figures again.

French President Emmanuel Macron said there were grey areas in China's handling of the coronavirus outbreak, and that “there are clearly things that have happened that we don't know about”. The UK’s Minister for the Cabinet Office Michael Gove said China had not shared accurate data about the “scale, nature and infectiousness” of the disease, while German Chancellor Angela Merkel also urged China to be transparent about the outbreak.

The Chinese government has always rejected any criticism, at any time, under any circumstances, from Western countries.

The Chinese government has always rejected any criticism, at any time, under any circumstances, from Western countries. China believes in the superiority of its system; why would it need to accept any logic in criticism? Is the case of Li Wenliang — who tried to sound the alarm about the coronavirus but died from it after being accused of being a troublemaker — sufficient to show a cover-up? China believes that most people are not stupid and would be able to make their own judgements.

The request by Western countries for more transparency from China only shows their ignorance about China's politics and systems. If China could be transparent, would there be a “Li Keqiang index”? (The Economist named this economic measurement index after the current Chinese Premier, who said that railway cargo volume, electricity consumption and loans disbursed by banks are better economic indicators than official GDP numbers.) Chinese foreign ministry spokesperson Geng Shuang said firmly that China has always been transparent in a sharp slap to the European countries who have been telling people not to be “naive” in thinking that China has been much better at handling the epidemic.

Not just an apology, but outright compensation

In relation to accountability, some countries are also seeking compensation from China, with the US’s calls being especially loud. In early April, Indian journal GreatGameIndia reported that the International Council of Jurists and the All India Bar Association have filed a complaint with the UN Human Rights Council to get China to pay compensation. Separately, at a Texas federal court, a $20 trillion lawsuit has been filed against China for waging a biological war. RFI has also reported that according to Saudi Arabia’s Arab News, an Egyptian lawyer is suing the Chinese President and asking China to pay US$10 trillion in damages to Egypt.

Based on this, the US can seek at least US$1.1 trillion in compensation from China, while the UK can seek US$430 billion, and the G7 US$4 trillion.

What basis is there for suing China? In late March, James Kraska, chairman of the Stockton Center for International Law at the US Naval War College, published an essay titled “China is Legally Responsible for Covid-19 Damage and Claims Could Be in the Trillions”, saying that China should take responsibility under the International Health Regulations. And in early April, UK think tank the Henry Jackson Society released a report that China had violated the International Health Regulations and brought immeasurable global losses, including losses of US$4 trillion for just the G7 alone. Based on this, the US can seek at least US$1.1 trillion in compensation from China, while the UK can seek US$430 billion, and the G7 US$4 trillion. The report summarised ten courses of legal action.

Will seeking accountability and compensation from China work? Absolutely not! Australian legal academic David Flint has suggested that the international community take a leaf out of the Nuremberg Trials book to get China to pay compensation — this will not work.

But this does not mean China will be fine following the pandemic, which has seriously hurt China’s soft power.

European countries will not follow the US in seeking accountability and compensation from China. It has been said that the European Union — under pressure from China — amended a report on the coronavirus, and softened the criticisms of China spreading disinformation. Merkel has so far not criticised China, although she did express the view that more transparency from China about the origin of the virus would be a good thing. The UK will not change its decision to allow Huawei to take part in building the UK’s 5G network. All this shows that for Europe, economic considerations win out against conscience.

The only feasible solution is for the US to take on China on its own, but that would be unimaginable; that is highly likely to take the current low-level cold war to a hot war. The Trump administration has no plan to start a fight with China — Trump is still hoping for China to implement the phase one trade deal — and going after China will only make China look bad. But this does not mean China will be fine following the pandemic, which has seriously hurt China’s soft power. When the West completely mistrusts China, it becomes more likely that the “China factory” will become empty.

Related: Did China win the fight against the virus but lose the world? | Missouri sues, but should China be held accountable for the global spread of Covid-19? | The Covid-19 pandemic has worsened the chasms of the world, but can humanity reflect and make progress?