While it is too early for his foreign policy platform to fully emerge, the Philippines' new president will have his hands full in calibrating Manila’s relationships with Washington and Beijing. It is not a foregone conclusion that he will lean strongly in either direction. This is in the context of continuing issues such as the South China Sea, with disputes over the Whitsun Reef and Second Thomas Shoal. 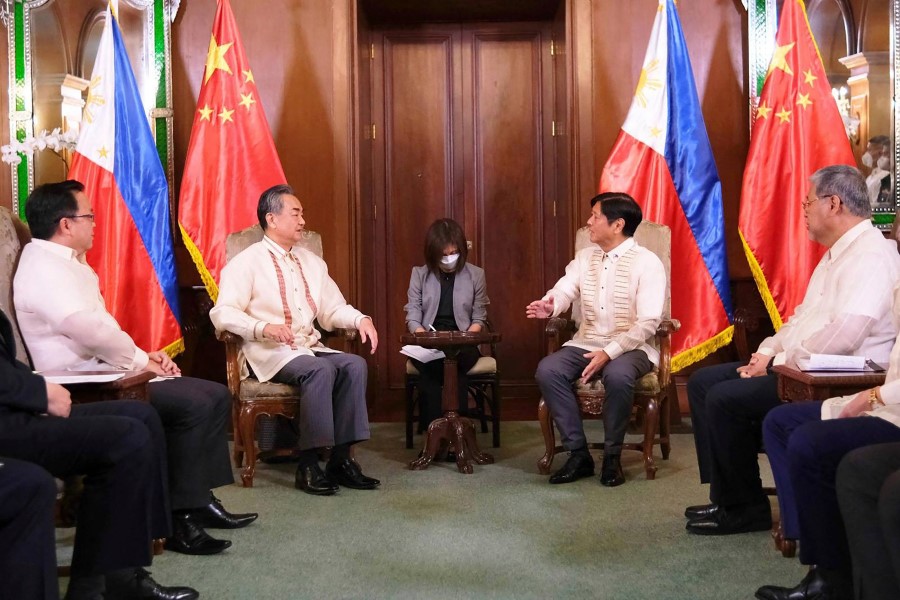 Ferdinand “Bongbong” Marcos Jr.’s election as the new Philippine president has sparked speculation that his administration’s China policy will be “akin” to that of his predecessor, Rodrigo Duterte. Apart from the fact that the two men are political allies, Bongbong repeatedly sang praises of China and occasionally scoffed at the US on the campaign trail. Yet, it should not be a foregone conclusion that the new administration will lean strongly towards Beijing.

Several indicators point to how Bongbong’s foreign policy could unfold. First are his post-election foreign policy statements and diplomatic actions, which carry more weight than campaign pronouncements. Contrary to his statements as a presidential candidate where he was seen to be appeasing China, Bongbong has since declared that his administration will uphold the 2016 South China Sea (SCS) Arbitral Award and that he will talk with China in a “firm voice”.

By displaying a principled stand on the SCS, Bongbong drew statements of support from opposition stalwarts such as former foreign secretary Albert del Rosario and retired Supreme Court associate justice Antonio Carpio. This initial accumulation of political capital is similar to how he has received extensive approval by tapping on technocratic cabinet members who served in previous administrations, reflecting his campaign slogan of “UniTeam” and his calls for national unity.

The fact that US President Joe Biden was the first leader to congratulate Bongbong by telephone and the earliest to extend an invitation for the latter to visit Washington sent a powerful political message...

Second is the recognition by foreign powers of the legitimacy of Bongbong’s presidency. While Bongbong was viewed negatively in Western media, his overwhelming win of 31 million votes, more than twice that of his challenger, compelled the US to immediately issue a statement of congratulations expressing willingness to work with the new administration and acknowledging that the elections conformed with international standards.

The fact that US President Joe Biden was the first leader to congratulate Bongbong by telephone and the earliest to extend an invitation for the latter to visit Washington sent a powerful political message because the US is still highly admired by Filipinos.

In addition, Washington has publicly dismissed rumours that Bongbong cannot enter the US because of a pending court case in Hawaii. The Biden Administration seems to be more pragmatically starting with a clean slate with Bongbong, in contrast to how former president Barack Obama dealt with Duterte. In fact, Biden’s pragmatism was displayed early on when he chose not to harp on Duterte’s dismal human rights record. The US has thus been able to maximise cooperation with Manila on strategic issues.

Bongbong’s willingness to engage with China, like Duterte’s, is likely driven by pragmatism, given China’s irresistible economic and geopolitical weight, and perhaps some personal appreciation of the significance of the bilateral relationship.

Pragmatism in dealing with China

At the same time, however, Bongbong has said that he wants to shift relations with China into a “higher gear” and that China is the Philippines’ “strongest partner”. The Chinese have also been quick to court the new Filipino president. Chinese Vice President Wang Qishan, President Xi Jinping’s right-hand man, attended Bongbong’s inauguration, while Chinese Foreign Minister Wang Yi visited Malacañang on 6 July 2022, becoming the first foreign top diplomat Bongbong received.

Bongbong’s willingness to engage with China, like Duterte’s, is likely driven by pragmatism, given China’s irresistible economic and geopolitical weight, and perhaps some personal appreciation of the significance of the bilateral relationship.

As a teenager, Bongbong accompanied his mother, then first lady Imelda Marcos, in a trip to Beijing in 1974, where he shook hands with Mao Zedong. This trip was historically significant because it led to the establishment of diplomatic ties between the Philippines and the People’s Republic of China (PRC). Throughout the years, Imelda remained friendly with China, culminating in her being conferred the 2021 Award for Promoting Philippines-China Understanding.

All this does not necessarily mean that Bongbong will be soft on China, especially if he looks back to his father’s legacy for lessons on how to deal with Beijing, or neglectful of the need to also be in good terms with Washington.

Similarly, Bongbong has said that he wants the Visiting Forces Agreement with the US to be maintained, calling the US a “special partner”.

Bongbong is showing early signs of wanting to maintain the Philippines’ strategic autonomy by hedging between the two great powers. His administration is likely to be cautiously pragmatic in dealing with China. Marcos shares Duterte’s savvy in knowing how to “give face” to Beijing through periodic friendly statements about China and welcoming Chinese aid and investments.

Recurring tensions on the ground, notably the Whitsun Reef standoff and the Second Thomas Shoal incident, ensure that the SCS issue will continue to preoccupy Bongbong’s administration.

Furthermore, the role of bureaucratic actors in strengthening institutional linkages with traditional security partners and in shaping the president’s policy choices should not be understated. The appointment of career diplomat Enrique Manalo as Secretary of Foreign Affairs will reinforce the department’s institutional memory and professionalism. Manalo’s experience and personal record suggest that safeguarding Philippine sovereignty and territorial integrity will be topmost as he leads Filipino diplomats.

With the Senate Foreign Relations Committee in the 19th Philippine Congress to be chaired by Bongbong’s sister, Senator Imee Marcos, it is possible that Imee can help to steer the senate to be more supportive of the president’s foreign policy direction.

A key point of tension in the Manila-Washington-Beijing triangle will be the intractable SCS dispute. Beijing will be vigilant about developments in the Philippines-US alliance, particularly in the Enhanced Defense Cooperation Agreement and future Philippines-US joint maritime patrols and military exercises in the SCS. Recurring tensions on the ground, notably the Whitsun Reef standoff and the Second Thomas Shoal incident, ensure that the SCS issue will continue to preoccupy Bongbong’s administration.

With respect to hydrocarbon exploitation in the SCS, the global spike in energy prices could give Bongbong an extra push to be more creative in concluding a joint oil and gas cooperation agreement with China. Whether Bongbong’s foreign policy team can manage these conflicting pressures could determine the Philippines’ future as a pivotal regional player.