China must understand the 'tragedy complex' of Biden's team

Understanding the psyche of Biden’s team will help China in its strategic calculations. First of all, members of Biden’s inner circle are different from the hawkish officials in the Trump administration, but they do have a “tragedy complex” that could leave them expecting the worst to happen. Could the upcoming China-US dialogue in Alaska be a first step towards re-orienting bilateral relations? Switzerland-based academic Xiang Lanxin takes a look at the factors at play. 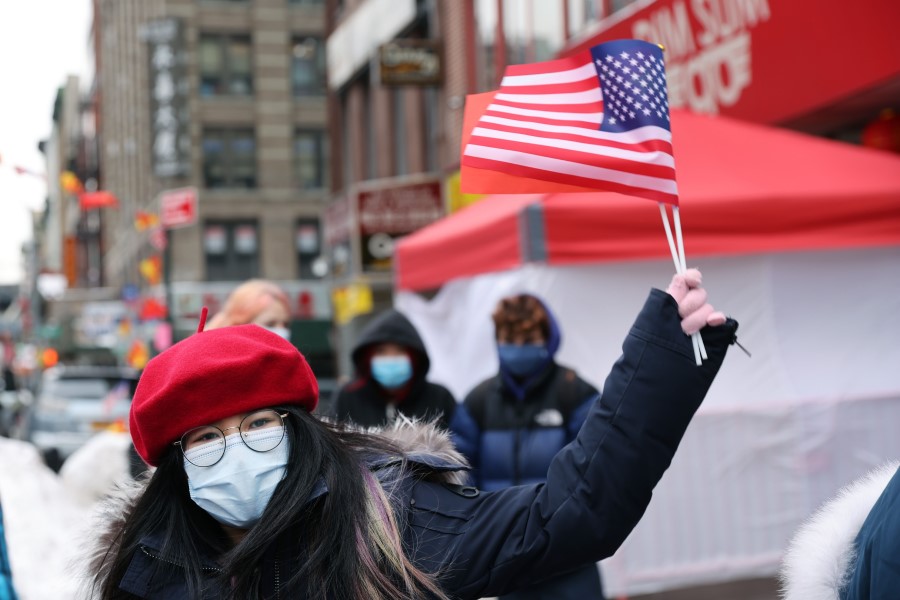 A woman holds the US and China flags at a Lunar New Year ceremony in Chinatown on 12 February 2021 in New York City. (Spencer Platt/AFP)

Candice Chan - 28 June 2022
US-based young comic artist Bei Yi reflects on China's gaokao (university entrance exams), which took place in early June. Every year, Chinese students cross this narrow log bridge of national exams, hoping to find a clearing on the other side. Students from regions across China, rich and poor, see this as a possible ticket to a better life and maybe even a passport to the West. When the stakes are so high, studying becomes a moral obligation to one's family. Some make it out, but on that journey, many things are left behind.
Read more
Translated by Candice Chan on 17 March 2021

As the Chinese saying goes, knowing oneself and one’s enemy allows one to win every battle. The upcoming China-US dialogue in Alaska prompts some analysis and understanding of the Biden team.

US President Joe Biden and his core foreign policy team are mainly made up of three main groups: those of Irish, Jewish, and Indian descent. These three previously marginalised groups share an obvious commonality: what I call the “tragedy complex”. The Irish have gone through too many tragedies — they were conquered and subjugated by the English, and nearly all of those who migrated to the US were poor farmers who were once called white trash and discriminated against as Catholics.

The tragedy complex is a state of mind, while maintaining the status of the US is a strategic aim; the organic combination of both forms the US’s policy towards China.

US Secretary of State Antony Blinken and senior officials in charge of China affairs are mostly of Jewish and Indian descent, whose tragedy complex goes back even further. If comedy helps to change our outlook by offering a happy ending after a series of misfortunes, then tragedy helps us to achieve psychological balance by stirring unease when life seems too blissful. Aristotle once called tragedy a form of emotional catharsis. And the easiest route to emotional catharsis is worrying that good times will not last.

The tragedy complex is a state of mind, while maintaining the status of the US is a strategic aim; the organic combination of both forms the US’s policy towards China. As such, China should not just focus on policy changes, but also fight a good diplomatic psychological war. As Mencius said, “The heart’s function is to think; to think is to gain, not to think is not to gain (心之官则思，思则得之，不思则不得也)."

They feel that China’s success in fighting the coronavirus highlights the failure of the democratic system, and that China is sure to push its governance model and openly challenge the values and human rights of a free democracy. Based on these two fundamental judgements, the Biden team firmly believes that China has the ambition and long-term plan to supplant the US, and that it needs to hit back.

And so, Beijing needs to make a choice whether to continue triggering the other side by pushing these two ideas. If the answer is no, then it needs to align its internal and external propaganda. Before China was strong, other countries did not pay too much attention to its internal propaganda, and the narrative of its internal media was often disconnected from its diplomatic rhetoric. Now, anti-China forces in the West are taking this narrative as evidence that China wants to supplant the US, and if China continues to allow such rhetoric to spread, that would be playing into the hands of the hawkish camp in the West.

Addressing human rights issues a must

Second, China needs to discuss human rights issues seriously. While the accusation of “genocide” in China clearly does not hold water on the international stage, China has indeed mishandled the Xinjiang issue. Since the training centres were established to fight against terrorism and alleviate poverty, China should have loudly and proudly promoted them from the start. By keeping them a secret for over a year before outsiders discovered them for themselves has caused China to lose the upper hand in the situation. In the aftermath, conspiracy theories and extreme criticisms are inevitable. The Hong Kong and Taiwan issues are strictly China’s internal affairs and there is indeed no way out nor concessions to be made.

Next, Biden’s team does not wish to fight a “new Cold War” and it is hard for the Quad to become a “mini-NATO” as envisioned. The Indo-Pacific Strategy is at most version 2.0 of Obama’s “rebalance towards Asia-Pacific” strategy. Thus, if China and the US can rein in their differences, the window for preventing war is still open.

An immediate “strategic retrenchment” would involve culling some BRI projects.

It is necessary to engage in strategic dialogues through multiple channels and not keep China’s security strategy under wraps. The existing strategic dialogues do not have much teeth. For example, the military dialogue between China and the US is mainly on a technical level and has no strategic dimension. The military’s Xiangshan Forum is not a strategic dialogue but rather a means for China to shape public opinion. There is also no regular communication between China’s National Security Commission and the corresponding US organisation. It is necessary to be open-minded about communication mechanisms and make bold changes.

Lastly, publicity for the Belt and Road Initiative (BRI) should be toned down and not be used as a way to promote the China model. An immediate “strategic retrenchment” would involve culling some BRI projects. If the BRI overextends itself, it will become difficult to deal with international geopolitical challenges. Besides, with the Covid-19 pandemic ravaging the world, many projects have essentially come to a halt, presenting a good opportunity for China to do a perfectly justifiable strategic retrenchment.

In sum, those in Biden’s team are not ideological hawks and think differently from Trump’s advisers, especially the coterie around Pompeo. The assumption that Biden’s China policy is only a change in form and not substance from the former Trump administration’s China policy is inaccurate. Biden’s team has given up on the strategy of wanting China to undergo regime change. This is already a big step forward from the former administration’s subversive policies of deliberately delinking the Communist Party from the country.

China and the US are still in the process of ironing out their differences and smoothing the edges in their relationship. The US is testing the waters by initiating the meeting in Alaska. This is critical in establishing a psychological sense of rapport. That said, we must not have too high expectations on the substantive policies. China must first correct its diplomatic stance. If it continues on the path of wolf-warrior diplomacy and openly demands the US to right their wrongs and correct their mistakes, it would have the same effect as saying that the US is in decline and that the Chinese system is superior, which might further trigger the Biden team’s tragedy complex and confrontational stance as a result.

Related: US-China talks in Alaska — how far can they go? | ‘Time and situation’ in China’s favour, but is China invincible? | 'Cold peace' in China-US relations: Who will get the last laugh? | China-US strategic showdown: Will the east wind prevail over the west wind? | Is there a genocide in Xinjiang?