‘Time and situation’ in China’s favour, but is China invincible?

Amid a strong sense that the East is on the rise while the West is in decline, China’s annual Two Sessions came to a close on a confident note, says Han Yong Hong. This augurs well for China’s plan to reach its goal of having a per capita GDP of a moderately developed country by 2035. However, the proof of the pudding is in the eating and unforeseen variables can still develop at every turn. 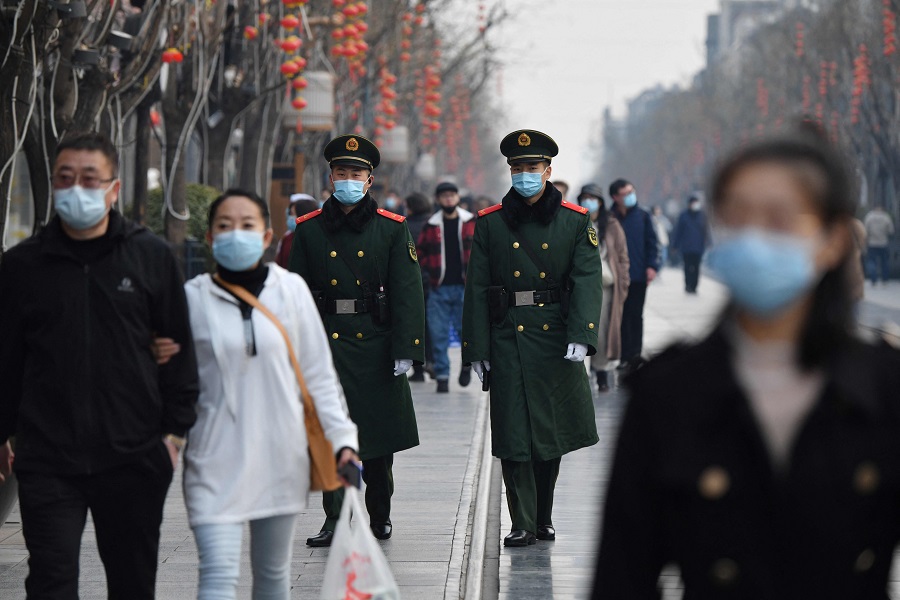 Two paramilitary police officers patrol in the area south of the Great Hall of the People during the second plenary session of the National People's Congress in Beijing on 8 March 2021. (Greg Baker/AFP)

Grace Chong - 1 December 2022
US academic Zhu Zhiqun gives an assessment of the late former President Jiang Zemin’s policies during his time leading China throughout the 1990s and into the early 2000s.
Read more
Translated by Grace Chong on 12 March 2021

With an air of calm and confidence, China’s Two Sessions (两会, lianghui, annual meetings of the National People's Congress (NPC) and the Chinese People's Political Consultative Conference (CPPCC)) 2021 drew to a close on 11 March. While much attention was focused on the NPC passing a resolution to overhaul Hong Kong’s electoral system, the core task of the Two Sessions is, after all, to deal with the inherent problems of China, especially in promoting sustainable economic and social development.

In this regard, China’s 14th Five-Year Plan and Long-Range Objectives Through the Year 2035 have been ratified at the Two Sessions this year, as China strives to revitalise its economy through concrete planning and consolidate its rise after the pandemic; at the same time, it wants to convince its people that China already “stands at a new historical starting point”, and its leaders would be leading the country forward with “time and situation” in their favour.

Over the past year, China-US relations, the Covid-19 pandemic, accountability issues over the pandemic, wolf-warrior diplomacy, and the international community’s rising hostility towards China made international news headlines. Now, people are suddenly realising that China has discreetly and unexpectedly launched a “strong country blueprint” — it is determined not to let the US control its future on the technological front and it no longer worries about the outside world's finger-pointing on the Hong Kong and Taiwan issues. In fact, it wants to rewrite the rules of Hong Kong elections now, and will not accept being preached to by the West.

Based on quantifiable indicators, China will use the next five years between 2021 and 2025 to overcome the middle-income trap; increase the income of low-income groups and expand its middle-income population (提低扩中) so that per capita income growth would be in tandem with GDP growth; continue to improve the people’s livelihoods to form a strong domestic market; and also work on reducing emissions and energy consumption. Between now and 2035, China aims to raise its per capita GDP to the level of a moderately developed country, and significantly expand its middle-income population.

The said “time and situation are in our [China’s] favour” has become the state media’s mantra. It is taken from Chinese President Xi Jinping’s address to provincial and ministerial-level officials in January. Xi had said, “The world is undergoing profound changes unseen in a century, but time and situation are in our favour. This is where our determination and confidence are coming from.”

Speaking about the development gap between China and the West, Xi himself said during the Two Sessions: “China can already view the world on an equal level.”

Xi’s strategic judgement is this: after the country has completed its poverty alleviation work and achieved a moderately affluent society in all aspects, China would welcome a new phase of the “historic leap” after having “stood up, grown rich, and become strong”. This is a “new historical starting point” and there would be “profound adjustment in the international balance of power”. China must strengthen itself in a comprehensive way.

Rise of the East and decline of the West

Put simply, the aforementioned strategic judgement can be encapsulated in the following phrase: “The East is rising and the West is declining." Zhou Ye, director of the office from the Party School of the Party Committee of Fudan University, once said at a meeting that Xi had mentioned at the fifth plenary session of the 19th Central Committee of the Communist Party of China (CPC) in October last year that it is necessary to recognise the trend of a rising East and a declining West, and the stark contrast between the well-governed China and the chaos in the West.

These judgements formed the backdrop of this year’s Two Sessions. Some officials showed their confidence about a rising East and a declining West in their speech, and the US’s poor handling of the pandemic and social crisis only added to their optimism. Speaking about the development gap between China and the West, Xi himself said during the Two Sessions: “China can already view the world on an equal level.”

It is important to note that “time and situation” not only refers to China’s strengthening economy vis-a-vis the world, but also the deep reversal of international ideological trends. Prior to the pandemic, neoliberalism was already facing difficulties in the West. Following the pandemic, free-wheeling capitalism is to be re-examined while socialist theories and the concept of big government are in vogue again as governments implementing forced quarantine policies are deemed to be reasonable. People’s attitudes towards American-style democracy have also become complex. Such a “time and situation” is very different from the rise of the West during the postwar era, and has become another “period of strategic opportunity” for China.

But this new stage of development is also fraught with risks and China must tread carefully. Higher-ups in the CPC have reiterated the need to possess a heightened sense of crisis and danger amid self-confidence to stay ready and prepared for more complex and difficult situations, alluding to the challenge of the US.

At the same time when China is trying its best not to walk the same path as the former Soviet Union, is it also creating other variables and sowing the seeds of other types of risks?... How would it handle a leadership transition in the future?

The higher-ups have previously carefully studied the reasons behind the dissolution of the Soviet Union and spared no effort in avoiding the same mistakes as the USSR, such as the collapse of ideals and beliefs, and the loss of control of and corruption in the regime. China’s leaders have done all that is possible to keep things under control for the past decade. At the same time, China clearly knows that it cannot be trapped in a Cold War with the US in order to avoid being dragged down by an arms race. At present, it should further open up to gain foreign technology and resources, as well as international support to prevent itself from falling into Western containment strategies.

However, do crises only appear in the same form as they did in the past? At the same time when China is trying its best not to walk the same path as the former Soviet Union, is it also creating other variables and sowing the seeds of other types of risks? Would it be forced to decouple from the US and compete on an equal footing with it before the conditions are ripe? How would it handle a leadership transition in the future? These uncertainties are getting people worried. Undoubtedly, based on an objective analysis of the current “time and situation”, China has at least ten years or so to make its way to prosperity. What comes after that is not something that we can resolve today.

Related: Overhaul of Hong Kong's electoral system: Is it still 'one country, two systems'? | China’s 14th Five-Year Plan will be a game changer | China-US strategic showdown: Will the east wind prevail over the west wind?