China’s 14th Five-Year Plan will be a game changer

In anticipation of China’s 14th Five-Year Plan kicking in next year, commentator David Ng examines how the proposals will affect the direction of China’s economic growth, as well as China-US competition, and in turn shift the global order. 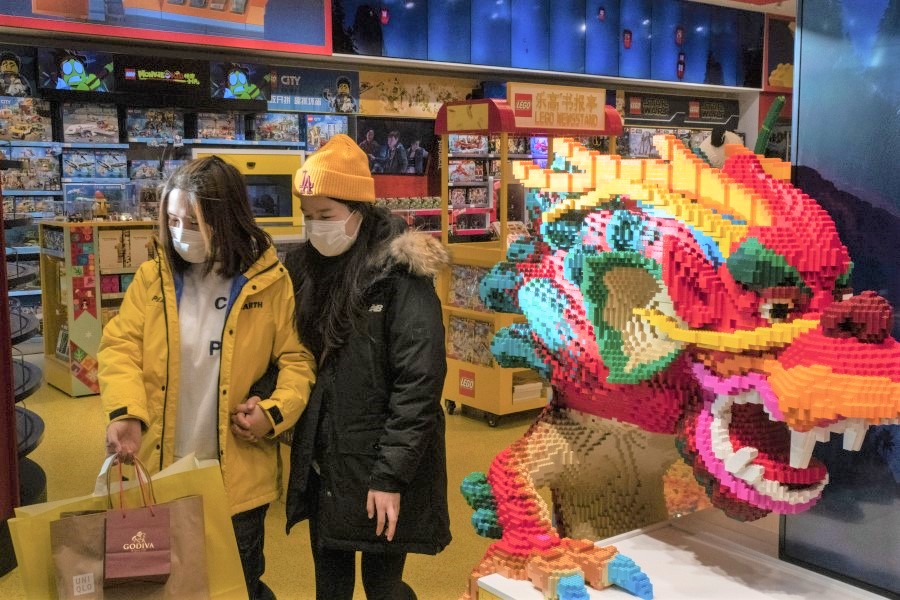 Customers walk past a dragon made from Lego bricks at a store in Beijing, China, on 7 December 2020. (Gilles Sabrie/Bloomberg)

Candice Chan - 18 May 2022
The Chinese government has recently announced plans to establish a unified national market that is highly efficient, standardised, open and competitive. It would break down walls, raise the standards of the business environment within China and act as a buffer against external pressures. While the intention is good, NUS academic Lu Xi points to possible drawbacks and challenges.
Read more
Translated by Candice Chan on 21 December 2020

The International Monetary Fund (IMF) has forecast that China’s economy will grow 1% this year and 8.2% next year, while other international financial institutions also have relatively positive forecasts.  This article lays out the short- and medium- to long-term progress of China’s economy, and the impact on the world.

China’s official figures reflect the realities of the country’s pandemic efforts. Effective controls have increased China’s social cohesiveness. Apart from public transport, masks are not mandatory in many places in China. Fines and other rules have not been imposed either. However, there were more people wearing masks after the summer. As the situation was not severe, some factories in small cities in the Greater Bay Area started work as scheduled after Chinese New Year, but there were fewer overseas orders. And by November, the manufacturing Purchasing Managers' Index (PMI) was 52.1%, the highest since 2017, while the non-manufacturing PMI was 56.4%.

In the six months after the Two Sessions in 2016, property prices trebled in many places. Efforts to get rid of existing unsold units came to naught, while rising prices increased the number of new unsold properties.

In the six months after the Two Sessions in 2016, property prices trebled in many places. Efforts to get rid of existing unsold units came to naught, while rising prices increased the number of new unsold properties.

The “dual circulation” model calls for stimulating domestic demand, and stable property prices and orderly adjustments would help. But even if the property bubble bursts or is squeezed by certain events, the impact on China’s economic growth may not be as major as painted by stakeholders, as the authorities have already redefined the path to economic growth.

Vast market enough reason for China to be bold

Next year, China will begin its 14th Five-Year Plan, and the Chinese Communist Party (CCP) central committee has made some proposals, which Chinese President Xi Jinping has elaborated on.

In the next five and also fifteen years, China will innovate in order to stimulate development, and create a new edge in development. It will improve its innovative capabilities by implementing industrial upgrading and modernising its industry value chain, as well as making its economic development more effective by focusing on leading sectors such as artificial intelligence, quantum information, integrated circuits, health, neuroscience, genetics, cloud technology, and deep earth and deep sea exploration.

With confidence-boosting economic results, China sees further opening up as a policy solution to ease US hostility towards itself, with international competitiveness, domestic economy and market size as the foundations.

China will also continue its reform and opening up by strengthening the state-owned economy and stimulating various markets. Media reports noted that Xi’s visit to Nantong city in Jiangsu and the exhibition on Jiangsu pioneer industrialist Zhang Jian*, as well as his praise of this historical figure to encourage today’s entrepreneurs, was a clear political signal.

At the same time, China will also open up to other countries on a higher level. China has joined the Regional Comprehensive Economic Partnership (RCEP) and is also considering joining the Comprehensive and Progressive Agreement for Trans-Pacific Partnership (CPTPP) while negotiating investment agreements with Europe.

With confidence-boosting economic results, China sees further opening up as a policy solution to ease US hostility towards itself, with international competitiveness, domestic economy and market size as the foundations.

Building the country and strengthening the military for reunification

During the 14th Five-Year Plan, China’s defence sector will accelerate strategic, forward-looking, and disruptive technological development. It will train and ready its troops, and ramp up preparations for reunification, protecting its sovereignty and interests, and handling the US threat.

The gap between China and the US

The 14th Five-Year plan reflects that China is far more confident and bold than two or three years ago.

In 2019, the GDP of China and the US were over US$14 trillion and US$21 trillion respectively. If China’s annual economic growth outstrips the US by 3%, the two economies will be about on par in about ten years. But if the exchange rate between the RMB and US dollar is affected by black swan events, such as a pandemic or war, then the time China will take to catch up with the US will also change accordingly.

And if that happens, China’s per capita GDP will only be a quarter of the US. But from another perspective, China will still have ample growth potential, and by about 2035, China’s economy will be almost equivalent to the countries in the Five Eyes alliance combined.

*Zhang Jian was a leading early 20th century industrialist who was devoted to causes such as education. In 1902, he founded Tongzhou Normal College, dubbed “the first normal school in modern China”, and in 1905, he started the first Chinese-funded museum, the Nantong Museum. He also became the minister of agriculture and commerce in the Republic of China government established in 1912.