The three communiques in US-China relations gave both the US and China a certain cloak of strategic ambiguity, but with senior members of the US government appearing to go against the tenets and China stubbornly holding the US to its clauses, what is left seems to be stark, opposing positions that make drifting into hot war all the more likely. 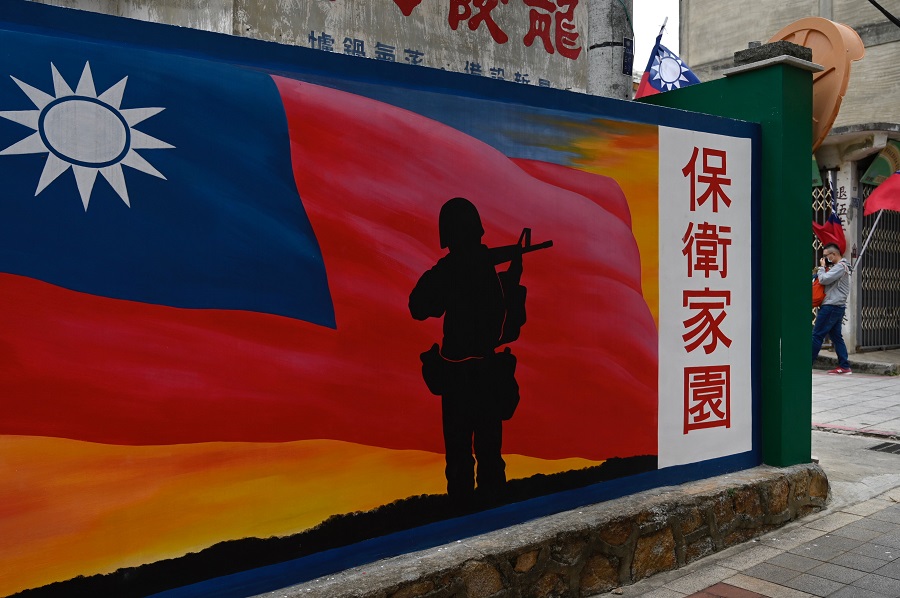 This photo taken on 21 October 2020 shows a mural painted on a wall on Taiwan's Kinmen Island. (Sam Yeh/AFP)

Grace Chong - 1 July 2022
Masayoshi Son, billionaire head of SoftBank Group Corp. may finally be able to push ahead with launching a US IPO for semiconductor and software design giant Arm Ltd., after wresting control of Arm China back from ousted CEO Allen Wu. It was no mean feat and a saga of twists and turns. But even now, some questions of Arm China’s shareholding and business remain unanswered.
Read more
Translated by Grace Chong on 23 November 2020

“Taiwan has not been a part of China,” said US Secretary of State Mike Pompeo at a US radio interview on 12 November, implying that the US has completely abandoned the three China-US joint communiques: the Shanghai Communique of 1972, the Joint Communique on the Establishment of Diplomatic Relations of 1979, and the August 17 Communique of 1982.

Recently, there has been much discussion in China and the US on “strategic ambiguity” and “strategic clarity” on Taiwan. But the concepts are messy and the meanings unclear, altogether making such talk misleading for decision-makers. Moreover, dialogue between the two countries has been like a chicken talking to a duck.

But is the mainland also benefiting from strategic ambiguity? Chinese officials have always been tight-lipped about this, leading to conceptual confusion.

‘Strategic ambiguity’ useful for both US and China

China thinks that strategic ambiguity benefits the US. If a military conflict occurs in the Taiwan Strait, the US is prepared to and can possibly use force to intervene in the name of “defending Taiwan”. However, the US never makes clear under what circumstances it will do so, thus leaving each side of the Taiwan Strait unable to ascertain if the US will act in its favour. The deterrent effect created through ambiguity is mainly targeted at the mainland to stop them from acting rashly.

The main intent behind the US’s ambiguous promise to defend Taiwan is to leave the decision to deploy US troops in the hands of the US. In this way, the US can play its cards against both the mainland and Taiwan. But is the mainland also benefiting from strategic ambiguity? Chinese officials have always been tight-lipped about this, leading to conceptual confusion.

But the mainland has always been unequivocal that the three China-US joint communiques form the “political foundation” of China-US relations. By saying so, China is actually acknowledging that strategic ambiguity has more advantages than disadvantages in improving China-US relations and maintaining stability in the Taiwan Strait.

However, China and the US have different interpretations of the communique mechanism. Internationally speaking, there are two types of communiques: joint communiques and treaties. The former mainly refers to discussion reports of certain major issues when national leaders or government delegations attend or host state visits. They contain points of consensus as well as separate viewpoints.

Three communiques have little teeth to constrain the US

Strictly speaking, the three China-US joint communiques are not treaties and hardly have any teeth to constrain the US. Under the background of worsening China-US relations, holding fast to one’s communique mechanism in a one-sided manner is tantamount to stubbornly going by the book and refusing to keep up with the times.

From day one, the US has regarded the communique mechanism as a policy platform for hedging its bets. Opinion makers in US policy circles are now arguing for strategic clarity. They hope that the US will show clear support for boosting Taiwan's defence capabilities and help bolster Taiwan’s international standing. Their rationale is that as China is now a strong country, strategic ambiguity will have less of a deterrent effect. Quite a number of politicians from both sides of the aisle support this stand. This shows a misinterpretation of strategic ambiguity. Strategic ambiguity still has a deterrent effect, but it is premised on mutual strategic trust between both countries — at the very least, China and the US have to agree that war is unnecessary.

The US is only concerned with the process of reunification (it has to be a peaceful one), and not the outcome. This is a policy that allows for hedging but also acknowledges the one-China policy.

When Richard Nixon visited China in 1972 with a delegation including assistant to the president, Dr Henry Kissinger, both sides reached a stalemate on Taiwan. To resolve the issue, the US side said, “The United States acknowledges that all Chinese on either side of the Taiwan Strait maintain there is but one China and that Taiwan is a part of China. The United States Government does not challenge that position. It reaffirms its interest in a peaceful settlement of the Taiwan question by the Chinese themselves.”

In other words, the US thinks that whether or not a Chinese reunification happens is up to the Chinese from both sides of the Taiwan Strait to decide. The US is only concerned with the process of reunification (it has to be a peaceful one), and not the outcome. This is a policy that allows for hedging but also acknowledges the one-China policy. The 1979 Taiwan Relations Act is also established on the basis of this “Kissinger formula”.

However, the US also proposed an important principle for establishing mutual strategic trust in the Shanghai Communique of 1972: “The United States believes that the effort to reduce tensions is served by improving communication between countries that have different ideologies so as to lessen the risks of confrontation through accident, miscalculation or misunderstanding. Countries should treat each other with mutual respect and be willing to compete peacefully, letting performance be the ultimate judge. No country should claim infallibility and each country should be prepared to re-examine its own attitudes for the common good.”

More dangerous when everything is crystal clear

Pompeo has done damage to China-US relations not only by rejecting the one-China policy but by violating the principle of peaceful coexistence between different political regimes. Advocating the separation of the party and the people, as well as denying the legitimacy of the Chinese Communist Party’s rule shows both an ignorance of China’s political traditions and an indifference to modern Chinese history. Whether US President-elect Joe Biden will be able to realise how precarious China-US relations are at the moment depends on whether his team interprets history reasonably and has a rational understanding of political legitimacy.

When national strategies are stark and without ambiguity, wars and conflicts become inevitable. Since the danger of a hot war has emerged, it is meaningless to merely talk about a new Cold War now.

Both countries will inevitably fall into the Thucydides trap if the current situation continues. Why did Kissinger say that the current state of China-US relations is shockingly similar to the days before the First World War? Because back in 1914, the warring parties were all on the offensive; they all thought they could win and had extremely clear strategic goals.

Now, the foundations of the communique mechanism on which China-US relations were stabilised have indeed been shaken. China and the US must find a new impetus to advance China-US relations. However, not only are both parties currently lacking in mutual strategic trust, they are also unwilling to make strategic concessions. When national strategies are stark and without ambiguity, wars and conflicts become inevitable. Since the danger of a hot war has emerged, it is meaningless to merely talk about a new Cold War now.

Related: Has Biden bared his fangs at China? | Why Taiwanese are pro-Japan but anti-China | The median line of the Taiwan Strait: No longer a boundary for mainland China | Chinese academic: Why the PLA conducts simultaneous exercises across different territorial waters | There will be no hot war as the people will not allow it | From a Marxist perspective, the China-US Cold War is inevitable