Reflecting on the background of Chinese diving Olympic champion Quan Hongchan, David Ng makes some observations about the urban-rural divide in China. He notes that after years of China’s rapid development, rural folk are still playing catch up economically, but they have not ruled themselves out of achieving success. Their own motivation will get them far, sometimes even as far as achieving Olympic glory. 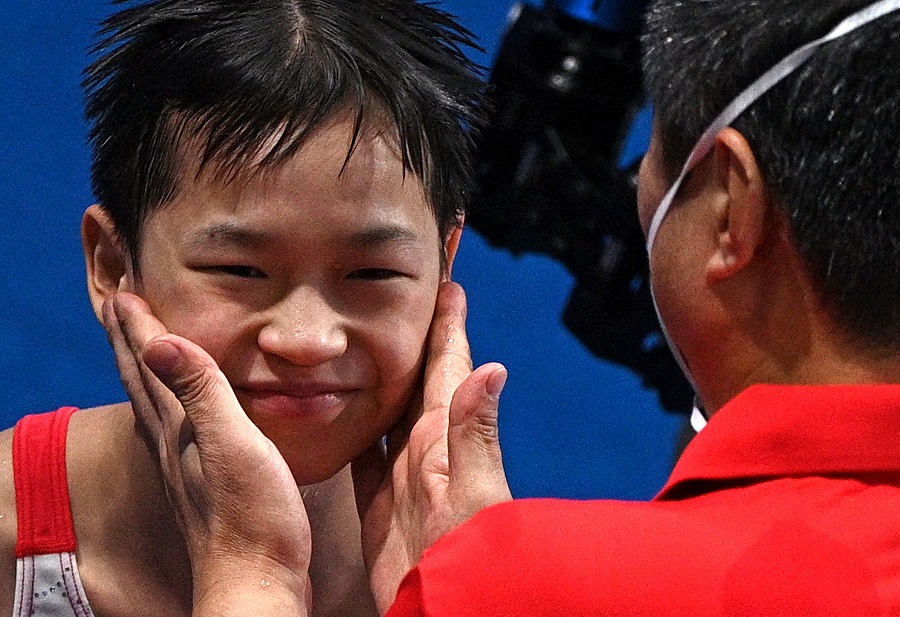 China's Quan Hongchan is congratulated by a coach after winning the women's 10m platform diving finals event during the Tokyo 2020 Olympic Games at the Tokyo Aquatics Centre in Tokyo, Japan on 5 August 2021. (Oli Scarff/AFP)

Grace Chong - 30 January 2023
Amid ongoing tensions, a high-level visit by US Secretary of State Antony Blinken to China in the coming week shows hope for improved relations between the two economic powerhouses. Zaobao correspondent Yu Zeyuan notes that while the meeting may not produce practical results, it is a much needed exchange to manage and control China-US relations from worsening.
Read more
Translated by Grace Chong on 31 August 2021

Chinese and foreign media have given different takes on Quan’s gold medal win. Observing the background of this Olympic gold medalist gives us some insight into China today.

One, rural athletes. In 2020, China’s urban population was around 63.9% of the country’s total population. National athletes who later become world champions require a combination of hard work, talent, and opportunity. It is natural for the proportion of urban and rural athletes to range from 3:7 to 7:3. Regardless of where they hail from, becoming world champions wins them honour and monetary rewards, and they are by no means forced into sports labour as described by some.

As amateur sports schools charge lower fees and also provide a place for students to learn a skill and undergo physical training guided by a teacher, both urban and rural parents are generally willing to send their children to amateur sports schools. (NB: Chinese media reports have said that most outstanding Chinese athletes typically do not come from families that are well to do. Sports school teachers have shared that sports training is a test of mental and physical endurance and pampered children usually lack the traits to succeed. Hence, according to these reports, most outstanding athletes come from rural families or from urban families where the parents are civil servants, factory workers or small business owners.)

I know of a Guangdong family whose son got selected into an amateur sports school to learn diving, much to the satisfaction of his parents. The daughter was selected to learn Cantonese opera but her mother declined the offer because she was hoping that her daughter would learn how to dance.

Clearly, one cannot be forced to receive training at amateur sports school; parental approval and the individual’s own willingness to do so are needed.

Quan started learning how to dive at Zhanjiang Sports School when she was seven. No matter how gifted she was, she was not talent-spotted when she was three or five years old and forcibly shipped off to a special school to receive professional training.

Her entry into the national team was a highlight of her career and personal life. I reckon that if rich and famous Chinese parents had such a gifted and motivated child, they would not hold him or her back as well.

But most students from amateur or vocational sports schools do not go on to win Olympic medals; some of them become physical education teachers or personal trainers in their respective fields of expertise, and their salaries vary according to the work they do.

Three, ideological work. China has developed a series of ideological education materials for national athletes preparing for the Olympics. Besides hanging a massive China flag at the training centres, athletes could be invited to join the Chinese Communist Party or the Communist Youth League of China before the games.

State media would also interview and feature potential gold medalists, and we would often hear rural athletes talking about how they would use the monetary rewards to pay for their mother’s medical bills if they clinched a gold medal. It is seldom the case that it is the father’s medical bills that they hope to pay for, and it makes one wonder if most of their fathers are indeed healthier.

If Quan’s father owned over eight acres of land, his salary would not be too bad among other villagers, and would be no less than a janitor living in a cage home in Hong Kong.

In search of a better life

The east bank of the Pearl River is more developed than the river’s west bank where Zhanjiang is located. The homesteads and arable land per capita of farmers in Zhanjiang are larger as well.

Based on media reports, Quan’s father grows sugarcane and oranges, which are also the region’s main cash crops.

Based on wholesale prices excluding manual picking costs, the profit from an acre of black-skinned sugarcane is around 8,000 to 9,000 RMB. An acre of oranges starts profiting from the fourth year and earns the farmer over 9,000 RMB per year.

If Quan’s father owned over eight acres of land, his salary would not be too bad among other villagers, and would be no less than a janitor living in a cage home in Hong Kong.

But just like many other rural households in Guangdong, Quan is one of five children in the family. They are a low-income rural household with many children and low monthly per capita income. Quan’s father does not own a private car; he travels to the sugarcane and orange fields by motorcycle.

Quan’s older brother dropped out of school to work — a common social phenomenon among rural boys.

Quan said that her family is poor. Perhaps her elders have made such comments before she left home and she remembered it after hearing it often. Such a family education is commonplace across Chinese villages. It not only reflects China’s urban-rural differences but also demonstrates the fact that many villagers are still unable to be on an equal footing with city dwellers.

After Quan clinched an Olympic gold medal, most Western criticisms are either out of a lack of understanding of Chinese training mechanisms or out of ideological differences.

In China, people who make sarcastic remarks are mainly green-eyed monsters. But nevertheless, Quan is already the pride of her parents.

Related: Does China still need Olympic gold medals to prove its worth? | Japan-bashing by Chinese netizens: A lack of sportsmanship during the Olympics? | A Chinese education: Why are Chinese parents and kids going to extremes?