China’s third aircraft carrier is not yet nuclear-powered and won’t be battle-ready for some years yet. Besides, in terms of possible warfare, it’s the numerous surface combatants China possesses that the US should be worried about, says Loro Horta. But with every iteration of China’s aircraft carrier, its ambitions of eventually taking on the US in the open Pacific is increasingly clear. 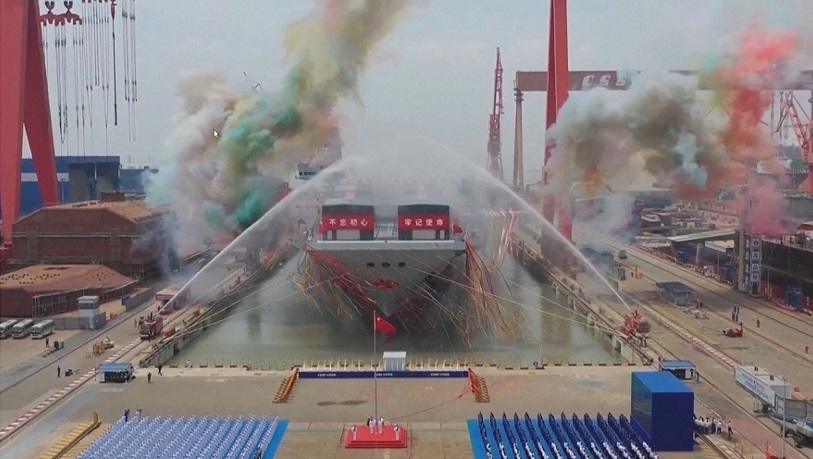 This screen grab made from a video released by Chinese state broadcaster CCTV shows the launch ceremony of the Fujian, a People's Liberation Army (PLA) aircraft carrier, at a shipyard in Shanghai, China, on 17 June 2022. (CCTV/AFP)

Grace Chong - 30 January 2023
Amid ongoing tensions, a high-level visit by US Secretary of State Antony Blinken to China in the coming week shows hope for improved relations between the two economic powerhouses. Zaobao correspondent Yu Zeyuan notes that while the meeting may not produce practical results, it is a much needed exchange to manage and control China-US relations from worsening.
Read more
Translated by Grace Chong on 30 June 2022

In mid-June, China launched its third aircraft carrier and its first entirely designed and built in the country. Some observers say that the launch of the Fujian or Type 003, comes amid regional rising tensions in places such as the Taiwan Strait and the South China Sea. However, this launch and the launch of its fourth aircraft carrier, the Type 004 expected to enter service in 2030, will likely have little impact on the balance of power on China’s periphery. Aircraft carriers are currently of marginal importance for China’s strategy in a conflict over Taiwan or over disputed islands in the South China Sea.

... the US Navy should be more concerned about the Chinese Navy (PLAN) having more modern surface combatants such as destroyers and frigates.

As such, the US Navy should be more concerned about the Chinese Navy (PLAN) having more modern surface combatants such as destroyers and frigates. These are fast, stealthy and heavily armed with missiles that pose a much greater danger to the US fleet than China’s two 1980s era technology aircraft carriers and the third which will likely only be fully operational in a few years’ time.

US carrier-based fighter jets will have to pass through a deadly wall of thousands of anti-aircraft and anti-ship missile systems before they can get within range of their targets. China has invested heavily in missile technology, deploying thousands of missiles off the coast of Taiwan and increasingly large numbers in its artificial islands in the South China Sea. China has made significant advances in ballistic, cruise and hypersonic missile technology, with several Western observers arguing that China is ahead of the US in these areas.

China’s missile umbrella means that US aircraft carriers will have to operate further and further from the Chinese coast.

There is currently no effective defence against hypersonic missiles. China’s missile umbrella means that US aircraft carriers will have to operate further and further from the Chinese coast. This will greatly reduce the efficiency of operations. China has no plans to fight a Battle of Midway type battle with the US in the middle of the Pacific. At least not for now.

The Fujian has an electromagnetic catapult system that allows it to deploy larger aircraft at a faster rate, increasing the number of sorties significantly. The speed and number of sorties are arguably the most important aspect of aircraft carrier warfare.

Of the 11 aircraft carriers currently operated by the US, only one — the Gerald R. Ford — operates an electromagnetic catapult system. The ten Nimitz class carriers all operate on steamed catapults. The fact that China has gone from “ski-jump” technology in its two first carriers to electromagnetic technology by leapfrogging the steam catapult attests to the growing sophistication of China’s naval industry.

The Fujian is also much larger than its predecessors with a full load displacement of 80,000 tonnes, albeit 20,000 tonnes smaller than the Nimitz.

China’s current three aircraft carriers are primarily an effort at developing an indigenous first-class aircraft carrier capacity, rather than as assets to be integrated into the PLAN’s current naval strategy.

However, the Fujian is still conventionally powered using gas turbines for propulsion. All US carriers are nuclear-powered, using a technology the US has dominated for over 60 years. Nuclear-powered carriers are much faster and have a much greater range. China is now focusing on developing its fourth aircraft carrier which is expected to be nuclear-powered and equipped with an electromagnetic catapult.

China’s current three aircraft carriers are primarily an effort at developing an indigenous first-class aircraft carrier capacity, rather than as assets to be integrated into the PLAN’s current naval strategy. Of the three carriers China now possesses, each one has been an improvement upon the other. This is an evolutionary process that by 2030 may put China in a position of technological parity with the US.

The acquisition of bases in the Pacific island nations and the Indian Ocean will become crucial for China after 2030.

By 2030, China expects to have dominance of the seas and air space close to its territory, namely the first island chain that stretches from Japan and the Philippines to Taiwan. Once it has secured dominance over this region by way of its air force, massive surface fleet, submarines and missile umbrella, it will accelerate modern aircraft production to allow the PLAN to challenge the US in the open Pacific. The acquisition of bases in the Pacific island nations and the Indian Ocean will become crucial for China after 2030. The recent security treaty signed between China and the Solomon Islands is a sign of things to come.

The immediate significance of China’s third aircraft carrier does not lie in the tactical or operational impact that it will have on the regional balance of power. Its significance lies in the fact that it demonstrates China’s ability to leapfrog technology and its methodical approach to naval modernisation. The launching of the Fujian also reveals China’s strategic ambitions in the Indo-Pacific for the next decades — that of challenging American supremacy in the open Pacific.

Related: With the Fujian, is China catching up to the US in aircraft carrier manufacturing technology? | What does the high-profile launch of three new PLA warships tell us? | China displays its new weapons amid cross-strait tension | China’s expanding its naval power, and it’s not afraid to show it