After years of being excluded from the TPP that later became the CPTPP, Chinese President Xi Jinping recently commented that China is “favourably considering” joining the CPTPP. Zaobao correspondent Yu Zeyuan looks at why China seems to be keen to hop on this bandwagon which was originally set up to target China. 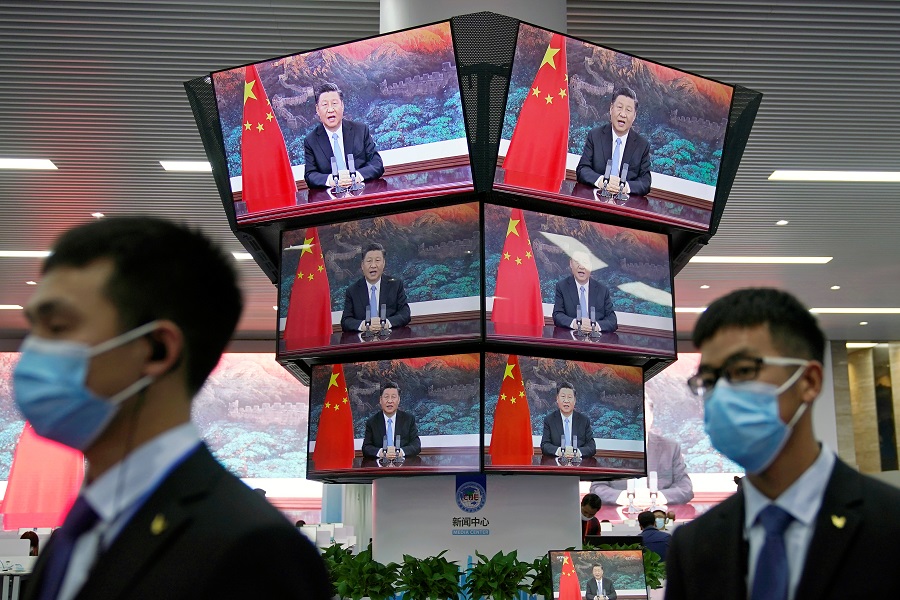 Chinese President Xi Jinping is seen on screens in the media center as he speaks at the opening ceremony of the third China International Import Expo (CIIE) in Shanghai, China, 4 November 2020. (Aly Song/Reuters)

Candice Chan - 30 January 2023
A mall in Shenzhen came under fire for putting up white lanterns with black text as part of its Chinese New Year decorations, while an “ugly” rabbit-shaped light decoration was removed from another mall in Chongqing. Academic Zhang Tiankan muses on tradition and innovation, and the evolution of traditional decorations.
Read more
Translated by Candice Chan on 23 November 2020

At the 27th APEC Economic Leaders’ Meeting on 20 November, the most prominent comment made by Chinese President Xi Jinping was that China will “favourably consider joining the Comprehensive and Progressive Agreement for Trans-Pacific Partnership (CPTPP)”.

Previously, China expressed an “open and positive” attitude towards joining the CPTPP. Moving from that to “favourably considering” it shows that China has decided that the CPTPP is more favourable to it than otherwise, and intends to join this free trade grouping that was originally meant to target China.

On 15 November, China and the ten ASEAN members, as well as Japan, South Korea, Australia, signed the Regional Comprehensive Economic Partnership (RCEP), raising China’s profile. Riding on this momentum, China’s leaders now want to join the even more rigorous CPTPP, which would give fresh impetus to China’s continued reform and opening up, and may nip in the bud the US’s efforts of building a common economic and ideological front against China.

... TPP terms included political conditions, such as TPP members having political systems that respect universal values of freedom, democracy, rule of law, and human rights, with many criteria and requirements, which are difficult for China to meet.

The CPTPP, signed in 2018, currently has 11 members. Apart from Canada, Chile, Mexico, and Peru, the other seven countries — Japan, Australia, New Zealand, Singapore, Vietnam, Malaysia, and Brunei — are all RCEP members.

This would seem to be helpful for China joining the CPTPP; in fact, it is not. The CPTPP in its earlier form was the Trans-Pacific Partnership (TPP), which was led by the Obama administration. And one of the aims of the original TPP was to exclude China from the main Asia-Pacific trade circle.

After RCEP, next stop CPTPP?

In view of this, the TPP terms included political conditions, such as TPP members having political systems that respect universal values of freedom, democracy, rule of law, and human rights, with many criteria and requirements, which are difficult for China to meet.

For example, the dispute settlement mechanism rules set out in the TPP stipulated that the laws of the host country should be in line with the spirit of the TPP; if there was a trade dispute between a multinational company and the host country, the case could not go before the judiciary of the host country but must be referred to an “international body of arbitration” which is often based in the US or Western countries. For China, it would be hard to win in such arbitration, and might even be seen as a violation of its economic sovereignty.

At the same time, the TPP’s rules on privatising state-owned enterprises, labour rights, environmental protection, e-commerce, and government procurement were enough to freeze China in its tracks. And so, China was not invited to join the TPP talks, nor was it able to.

Surprisingly, Trump, who advocates “America First”, argued that the TPP would not facilitate the return of manufacturing to the US, and pulled out of the TPP on the day he took office. As a result, the TPP became the CPTPP, and Japan became the largest economy in the CPTPP.

Compared with the TPP, the CPTPP’s clauses relating to investment, intellectual property, trade in services, government procurement, environmental protection and so on have been removed or watered down. Thus the CPTPP in its current form has lost much of its cachet whether in its aim or ability to contain China. At the same time, China has made improvements in various areas such as intellectual property and environmental protection, thus narrowing the gap with the standards set out in the CPTPP.

As the de facto leader of the CPTPP, Japan has recently made known its plans to expand the CPTPP. At the APEC CEO Dialogues on 20 November, Japan’s Prime Minister Yoshihide Suga said, “Japan will aspire for the Free Trade Area of the Asia-Pacific through the early conclusion of the RCEP agreement and the steady implementation and expansion of the CPTPP as next year's chair.”

By signing the RCEP, China has reached a bilateral tariff concession arrangement with Japan for the first time. It is also envisioned that negotiations for a China-Japan-Korea free trade zone, as well as a China-EU investment agreement, will accelerate with the signing of the RCEP. Notably, while the US may join the CPTPP once the Biden administration takes over in January, it is unlikely to happen quickly given the great resistance in the country.

China has to rise above its own traditional mindset and restrictions, and adopt more reforms that “turn the blade inwards” to overcome the obstructions of interest groups.

Therefore, China has seized the upper hand by expressing its willingness to join the CPTPP at this juncture. If the Biden administration decides to rejoin the CPTPP, the CPTPP may become a new negotiation and communication platform between China and the US. Although China and the US may not see eye to eye on issues concerning the CPTPP, China believes it is very important to stop China-US relations from worsening and to prevent a trade and economy decoupling with the US. In that light, it is not entirely bad to have a new channel of communication with the US.

Undoubtedly, China’s road to joining the CPTPP will not be smooth. Pressure from the US, as well as Japan and other CPTPP member countries’ reservations about China aside, China has to rise above its own traditional mindset and restrictions, and adopt more reforms that “turn the blade inwards” to overcome the obstructions of interest groups. Only then will it have a chance of meeting the standards and requirements of the CPTPP in the aspects of intellectual property, state-owned enterprises reform, labour rights and so on. Such a major undertaking cannot be accomplished in the short term.

It is noteworthy that the intention behind China’s desire to join the CPTPP is not only to gain a new bargaining chip against the US, but to give a new impetus to greater reform and opening up much in the way that WTO membership at the start of the century did.

China faced strong resistance from domestic vested interest groups before it joined the WTO in 2001. Some people even predicted that China would become a vassal state chained to the economic chariots of Western countries. However, China’s reform and opening up reached greater heights after it joined the WTO, marking a new starting point for China’s economic take-off.

Now, China still faces many challenges and obstructions in the areas of state-owned enterprises reform, market access, intellectual property protection and so on. But the CPTPP is currently the free trade agreement with the highest standards in the world. Joining it will certainly help China overcome these obstacles, promote industrial upgrading, improve rule of law standards, and achieve a higher-quality opening up.

Related: RCEP: The start of a new ‘China-centric’ order? | Why China is rejoicing over the RCEP | RCEP affirms ASEAN’s irreplaceable East Asian centrality | China's next Five-Year Plan focuses on security, stability and quality of development; adopts a more subdued tone