The global chip shortage throughout 2021 prompted many tech companies to rely more on themselves. Coupled with the rise of artificial intelligence, demand for high-capacity chips has increased with tech companies and device makers racing to deliver smarter services and products. But the global semiconductor industry is also getting increasingly crowded, as more and more newcomers seek to gain a foothold in advanced chips to power new technologies. 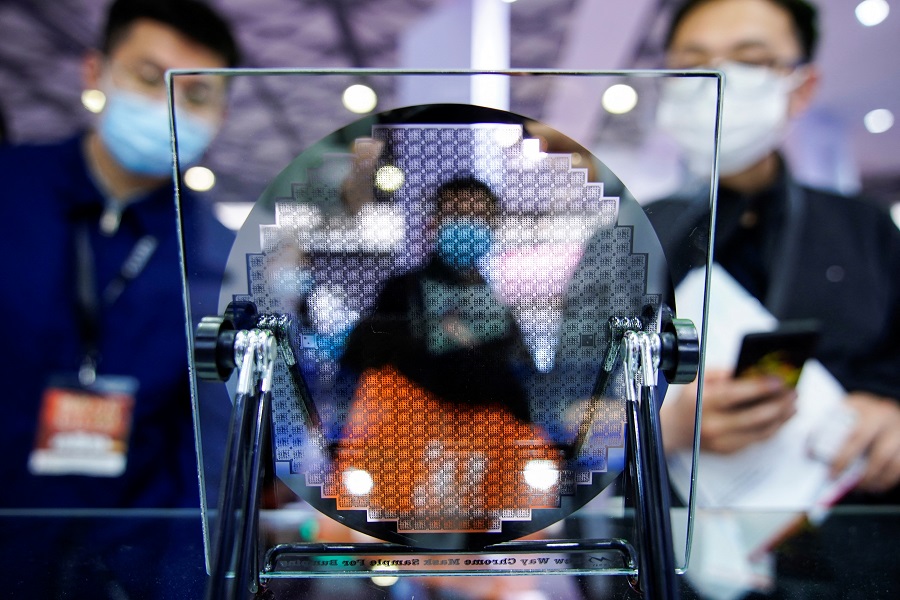 Visitors look at a display of a semiconductor device at Semicon China, a trade fair for semiconductor technology, in Shanghai, China, 17 March 2021. (Aly Song/Reuters)

Grace Chong - 30 January 2023
Amid ongoing tensions, a high-level visit by US Secretary of State Antony Blinken to China in the coming week shows hope for improved relations between the two economic powerhouses. Zaobao correspondent Yu Zeyuan notes that while the meeting may not produce practical results, it is a much needed exchange to manage and control China-US relations from worsening.
Read more
Translated by Grace Chong on 12 January 2022

The global semiconductor industry is getting increasingly crowded as newcomers pour in from all fronts seeking to gain a foothold in advanced chips to power new technologies.

The rise of artificial intelligence (AI) has fueled demand for high-capacity chips as tech companies and device makers race to deliver smarter services and products. The global chip shortage throughout 2021 prompted many of them to rely more on themselves.

Cloud service giants Amazon and Alibaba Cloud released processors developed in-house late last year that will be used to power servers in data centers. The cloud unit of Tencent Holdings in early November said it started trial production of its own AI chip. In December, ByteDance, owner of short-video app TikTok, also announced progress in its own AI chip development as the company steps into the cloud market.

Rising smartphone leaders including Xiaomi Corp., Vivo and Oppo are gearing up in-house semiconductor research in hopes of challenging behemoths such as Apple, Huawei Technologies and Samsung Electronics.

“Chips are the ultimate form to reflect the hardware industry’s technology accumulation,” said Xiaomi founder Lei Jun. “If Xiaomi wants to move further and become a global tech leader, it must fight for chips.”

China is a central battlefield for chipmaking because of its large number of smart device makers and the country’s campaign to reduce reliance on imported integrated circuits amid growing tensions with the US.

The chipmaking race is also heating up among automakers as the industry embraces autonomous driving technology. Tesla Inc. developed its own chips in 2019 to power its smart driving system. Chinese upstarts Xpeng Inc. and Nio Inc. followed suit.

Research institution Gartner predicted in early December that about half of the top ten global automakers would jump on the bandwagon of chipmaking by 2025.

The large-scale entry of tech companies and manufacturers is changing the landscape of the global semiconductor industry, posing threats to giants like Intel Corp. and Qualcomm.

Chip race in the cloud

Alibaba decided to develop its own chips based on Arm architecture in 2019, taking on Amazon’s Graviton Arm server processor and Huawei’s Kunpeng 920, people with knowledge of the matter said.

Alibaba pushed into semiconductor development also because of clients’ increasing demand for high concurrent cloud computing capacity that is hard to meet with chips available on the market, Zhang said. Most of the exisiting chips were not designed specifically for cloud computing and put more emphasis on single-core performance, he said.

Following the production trial, Alibaba plans to start internal test use of the Yitian 710 and seek the opportunity to launch mass production with Taiwan Semiconductor Manufacturing Co. (TSMC), which may take several months, according to Zhang.

At the same time, Alibaba will continue deepening its partnerships with chip suppliers like Intel, AMD Inc. and Nvidia Corp., Zhang said. Alibaba expects to use the Yitian chips only for its own cloud business for some time, he said.

Domestic rivals Tencent and ByteDance followed. In 2020 Tencent set up a semiconductor research lab with three chips under development to be used for photo and video processing.

Tencent’s investment in chips is mainly driven by the need to address its own tech issues, said Tang Daosheng, CEO of the company’s cloud and smart industry business group.

The rise of cloud computing is bringing profound changes to the internet industry, creating new demands, said Yang Zhenyuan, vice-president of ByteDance. Internet companies are flocking into the chipmaking sector as they are more sensitive to the new demands than traditional chipmakers, Yang said.

Smartphone makers are racing to build their own chipmaking capacity in hopes of gaining a competitive edge in the cutthroat battle for market share as the success of Apple has proved the importance of self-developed chips and operating systems, analysts said.

In October, Google debuted its 5nm Tensor chip in its newly released Pixel 6 models as the tech giant pushes further into the mobile phone business.

Leading Chinese smartphone maker Oppo in December unveiled its first self-designed chip, the MariSilicon X, which it says can process real-time RAW images — the storage format that contains the most information but also requires more computing power. It will debut in the company’s flagship Find X line in the first quarter of 2022.

Oppo tapped into chipmaking in 2020 and plans to invest billions of RMB in research, a chip industry investor said. The company set up a team of more than 1,000 people, aiming to design its own System on a Chip — an integrated circuit that combines all or most components of an electronic system.

Xiaomi has engaged in chip design since 2014 and launched its Pengpai S1 microprocessor in 2017. But market response to the device was lukewarm. Efforts accelerated last year with the release of Xiaomi’s first foldable phone equipped with its new self-designed Pengpai C1 chip, an image signal processor to improve photo quality.

Xiaomi spent two years and 140 million RMB in the development of the Pengpai C1, according to Vice-President Zeng Xuezhong.

Smartphone makers are counting on in-house chip design to strengthen their position in future competition, an industry analyst said. Such capacity will also give them more bargaining power with major suppliers such as Qualcomm and MediaTek Inc., the analyst said.

Leading carmakers are pushing into chipmaking because they usually have more customised design demands than Nvidia can meet...

Leading carmakers are pushing into chipmaking because they usually have more customised design demands than Nvidia can meet, said Xing Yaopeng, a senior manager at BAI Capital.

Carmakers are also in need of more powerful chips to enable smart cockpit systems, allowing drivers to control the vehicle through simple screen clicks. Qualcomm is the biggest supplier of such chips.

Geely-backed SiEngine last month released its 7nm intelligent cockpit chip, which is set to be installed in cars on the road in 2022. The company is also working on its autonomous driving chip, targeting a 2024 release.

The 2021 global chip shortage rattled carmakers and prompted many of them to seek more self-reliance. Gartner estimated that about half of the top 10 global carmakers will set up chip design teams to enhance control of supply after the chip crisis.

In the third quarter of 2021, Intel reported weaker-than-expected performance with a 2% decline in PC business revenue. Chief Financial Officer George Davis linked the drop to the loss of orders from longtime customer Apple, which started using self-designed chips in November 2020 to replace Intel’s.

Intel didn’t release details of its business with Apple, but analysts said Apple has accounted for 2% to 3% of Intel’s annual revenue, which was US$77.9 billion in 2020.

Qualcomm, the major smartphone chip supplier, faces similar pressures. In November, CFO Akash Palkhiwala predicted that Apple would reduce the share of Qualcomm chips in its phones to 20% by 2023, leading to a significant drop in Qualcomm revenue. Qualcomm currently supplies modem chips for almost all of Apple’s devices.

The company’s revenue from Apple reached as much as US$6 billion in 2021, according to Sravan Kundojjala, associate director of handset component technologies service at Strategy Analytics. To offset the impact, the chip giant stepped up efforts to diversify its business beyond phone chips, Kundojjala said.

...tech giants will continue working with outside chipmakers even as they push into self-development.

Tech giants will focus only on certain types of chips that are most important to them, while more products will still rely on partnerships with chipmakers, said Yao Fangzhou, vice president of investment at Beijing-based venture capital ZhenFund.

“The semiconductor industry relies highly on labor division and coordination,” Yao said. “Even the biggest chipmakers can produce only a small portion of all the 4,000-some types of chips humans can make.”

Chipmaking is complex and requires long-term investment, BAI Capital’s Xing said. It will take time to see whether the new players can persist and challenge the mainstream producers, he said.

Yao said he is more optimistic about Chinese tech leaders’ chipmaking initiatives because of their financial and research capacity as well as China’s well-developed semiconductor industry chain.

“The tech confrontation with the US reminded Chinese entrepreneurs of the importance of self-reliance in the high-tech sector,” Yao said. “Business leaders are more determined to build their own chips, and they see it as a key strategy for long-term efforts.”

This article was first published by Caixin Global as "Cover Story: How the Global Semiconductor Industry Turned Into a Free-for-All". Caixin Global is one of the most respected sources for macroeconomic, financial and business news and information about China.

Related: Why no country can win the chip war | China's going full speed ahead on technology innovation. Will it work? | Faced with a shortage of water, electricity and vaccines, can Taiwan still deliver the chips? | Chinese companies drawn to chip-making like bees to honey | Technology and innovation race: US losing edge to China?