Cultural historian Cheng Pei-kai: The power of the individual during a pandemic

Like many of us experiencing pandemic days, cultural historian Cheng Pei-kai spent the last two years living quietly. When the virus was just starting to spread in Wuhan last year, he was in Shenzhen but managed to cross back to Hong Kong before the lockdowns. As he left the material life behind and got into the rhythm of staying at home, he sought solace in books, calligraphy and his beloved Kunqu opera. For all the things that are out of our hands, at least we have gained time for introspection, self-reflection and growth. That much is within our control. 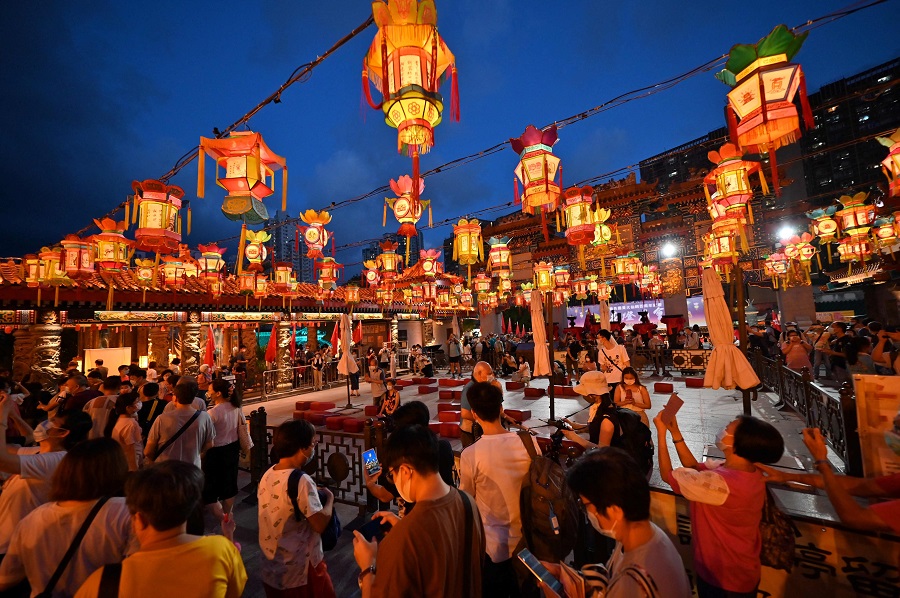 Visitors walk through a display of lanterns ahead of the mid-autumn festival at Wong Tai Sin temple in Hong Kong on 18 September 2021. (Peter Parks/AFP)

Grace Chong - 21 September 2022
Prabowo has been in Indonesia’s political scene for decades and his chequered past has not deterred him from multiple runs for vice-president and president. Given his support from the conservative and radical Muslims, with a potential running mate that can boost his standing, will Prabowo finally make his mark as Indonesia’s president in the 2024 elections? ISEAS academic Leo Suryadinata gives a profile of this controversial figure.
Read more
Translated by Grace Chong on 11 October 2021

I received a letter from Peking University’s Kunqu Opera Inheritance and Study Center informing me that all Kunqu (昆曲, Kun opera) performances and related concerts and seminars would be temporarily suspended due to the coronavirus outbreak.

Not knowing when we would gather again, they hoped that Kunqu lovers like us would go online to talk about what we have been up to during this stay-home period, and treat it as a gathering to support and keep in touch with each other.

What a good idea. After all, I have known many of these fellow enthusiasts for 30 to 40 years, and many of us are already in our advanced years. In the past, we would meet at least twice a year to catch up and learn from one another during the seminars. We would have a meal and applaud in unison after watching a fabulous Kunqu performance.

When can we meet again? I am perplexed by the predictions of European and American experts. Some say that if we go by the SARS experience, the Covid-19 coronavirus may go away in the summer. But what if the Covid-19 coronavirus doesn’t play by the rules? Other experts say that there might be another wave of infections in autumn and winter, and a second wave next spring, as Covid-19 becomes an endemic disease. What does this mean? Does it mean that Covid-19 comes in a cycle like the four seasons?

There’s nothing we can do and we can only hope for the best. Philosopher Laozi said, “Heaven and Earth are impartial; they treat all of creation as straw dogs. The Master doesn’t take sides; she treats everyone like a straw dog.”*

Humans are too smart for their own good and wilfully try to play God. They are selfish, greedy, and never content — they industrialise, modernise and globalise, and see the annihilation of Earth’s original ecology as their lifetime ambition. Great! A plague has now come our way, and the bird flu, swine flu, SARS and Covid-19 are all endemic diseases. Will they be part of the norm in the future? Will frequent quarantines be common?

This year, I spent the Lunar New Year with friends and family in Shenzhen. When we were there, I heard that the coronavirus outbreak was very serious in Wuhan, which may soon be locked down. Thus, early in the morning on the third day of the Lunar New Year, we rushed back to Hong Kong.

By then, Shenzhen was already in a state of panic. Shops were shuttered and there was barely anyone on the streets. We cleared immigration relatively smoothly and filled in a health declaration form at China Customs. Upon reaching Luohu Port, we realised that we didn’t have to fill in any health declaration forms. This meant that the Hong Kong government did not think that it was necessary to close the borders yet. I have been in Hong Kong ever since and have not gone out for the past seven weeks.

I respect, and in fact revere, the major advances in science and material civilisation. But, I disapprove of society’s sole focus on economic development and disregard for the loss of humanity.

Letting go of the material world

I’ve basically self-isolated at home for seven consecutive weeks. I would only go out on Saturdays to stroll along the beach and watch the waves crash against the shore as if nothing’s wrong. Then I would head for the supermarket to buy groceries and daily necessities.

Away from the hustle and bustle of life and all kinds of gatherings and academic/cultural activities, I am starting to feel like I am living a life of seclusion. The days are slowly melding into each other. It feels as if a piece of frosted glass separates me from the world of seeking fame and fortune.

At first, I couldn't see the other side clearly, but soon, I wasn't even trying to look through the glass anymore. Instead, I now have the time to ponder over where human civilisation is headed and am deeply dissatisfied with modernisation and globalisation.

I respect, and in fact revere, the major advances in science and material civilisation. But, I disapprove of society’s sole focus on economic development and disregard for the loss of humanity. So, I’m going back to what a lone scholar does best — reading, practising calligraphy and listening to Kunqu.

In my spare moments, I would practise calligraphy, writing in both the small regular script (小楷) and medium regular script (中楷) by copying books, such as the Classic of Poetry and Three Hundred Tang Poems (《唐诗三百首》), as well as the works of Du Fu, Bai Juyi, Su Shi, Su Manshu, and Kunqu lyrics.

I also continued working on the book (《茶饮在中国》) I had put aside last year as I was too busy with other things. The basic chapters are done and I just need to make the finishing touches. But I just wasn’t satisfied and didn’t want to finalise it. During this period, I also wrote a few dissertations on Su Shi’s life and creative environment.

If everyone listens to Kunqu, society would be less frazzled, one’s moral character can be developed, and Chinese culture would be rejuvenated. This is the way a great power rises.

Time to soak in Kunqu

Since we are confined to the home, I’ve been watching a lot of nature documentaries, especially the natural history documentaries on BBC narrated by Sir David Attenborough. I seldom watch movies and do not watch serial dramas at all. But I do listen to Kunqu and operas.

I recently found many videos of renowned Western opera singers of the 1960s to 1980s, such as Maria Callas, Renata Tebaldi, Joan Sutherland, and Luciano Pavarotti — their voices are absolutely heavenly. I am also thankful that high definition Kunqu performances have been uploaded online and hope that various Kunqu opera theatres can also do the same.

To all my Kunqu buddies: We don’t normally have much time to ourselves. Now that we’re self-isolating at home, it’s the best time to listen to Kunqu, nourish our bodies and minds, foster a better mental and physical health, and hone our aesthetic tastes. If everyone listens to Kunqu, society would be less frazzled, one’s moral character can be developed, and Chinese culture would be rejuvenated. This is the way a great power rises.

Related: Cultural historian Cheng Pei-kai: The best antidote for surviving the pandemic | Professor Littlewood and his love for Chinese opera | Autumn musings by the West Lake | Picking up an ink brush amid the pandemic, what do I write?