Technology specialist Yin Ruizhi looks at the vast amounts of money tutoring agencies in China have been spending on advertising to generate quick wins. In the long run, students enrolled at such institutions suffer as they end up memorising material rather than truly learning. Seen in that light, the government’s recent intervention was a long time coming. 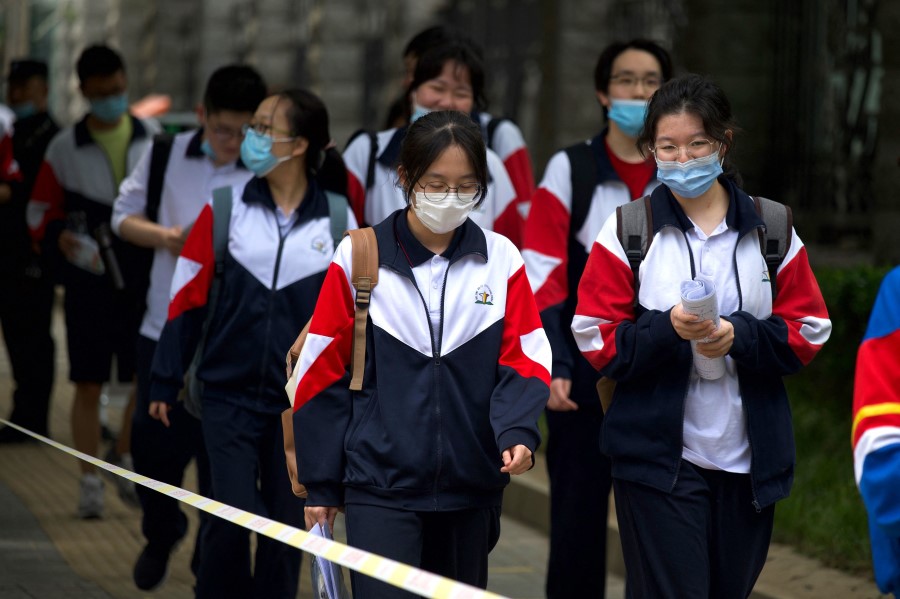 Students enter a school to sit for the first day of the National College Entrance Examination (NCEE), known as “Gaokao” in Beijing on 7 July 2021. (Wang Zhao/AFP) Candice Chan - 21 November 2022
Various areas in China have responded to the new “20 measures” for Covid-19 controls, as announced by the Chinese central government on 11 November. Zaobao’s China Desk takes a look at how various local authorities have — or have not — adjusted their measures and the public’s reaction.
Read more
Translated by Candice Chan on 19 August 2021

Following the announcement of China’s “double reduction” policy in reducing the burdens of homework and after-school tutoring, the online education sector is being killed off, and the entire China concept stock sector is also being dragged down. Countless fear-mongering online commentators are saying that such a brutal and strict regulatory approach will also extend to other sectors, which will ultimately quench the appetite for capital investment into China. In fact, such comments are ridiculous.

First of all, the Chinese government is not brutally repressing the education sector. The core focus of this round of regulation is K12 or basic education, and not the education sector as a whole. More importantly, the government regulations are rational — backed by clear and reasonable logic on whether there are major negative externalities in the sector. Understanding this, one can then accurately assess whether such strict controls will be replicated in other sectors.

The reasoning behind the Chinese government’s strict regulation of K12 education is the capitalistic pursuit of benefits riding on this unique industry, leading to almost purely negative externalities.

Economic externalities refers to the non-market impact of the economic activities of an economic entity (including businesses or individuals) on others and on society. In this case, the costs and consequences of the economic activities are not solely borne by the actors, but impact a third party that is not directly related to the production or consumption of that good or service.

For regular industries, businesses provide services to consumers in an exchange of demand and supply. For example, a well-run eatery sells breakfast meals at a price that supports costs and makes a profit, while customers assess the meals as clean, tasty, healthy, and reasonably priced. Such a transaction is sustainable and beneficial to both sides; for the community, such distribution of work is reasonable with positive externalities, because the eatery’s clean and tasty breakfast meals are good for healthy living.

But imagine if addictive drugs were added to these meals. In the short term, business would boom and even lead to a lot of tax revenue; however, in the long term it would affect people’s health, and the government would definitely shut down such eateries. In such circumstances, breakfast is a  commercial behaviour, one externality apart from both sides being willing to transact is whether these breakfast meals are good for the people’s long-term health.

...studies by many organisations show that after going through highly commercialised K12 tutoring, these students are weaker in scientific knowledge, self-learning ability, and independent thinking...

As for commercialised, industrialised K12 tutoring, if it is good for students’ independent thinking, scientific knowledge, and long-term learning abilities, then it is an enhancement, and industrialised, commercialised K12 tutoring is a positive externality. But if the consequence for students is a drop in long-term learning ability, lack of scientific accomplishments, and a loss of independent thinking, then it is a negative externality for society.

Let us assume positive externalities of K12 tutoring. Over a decade since the advent of companies such as TAL Education Group, the market penetration rate of extracurricular tutoring in big cities has hit 40%. However, during this time, China’s university students are not significantly better in terms of engineering and science knowledge, or in their ability to learn independently as they enter society. In fact, studies by many organisations show that after going through highly commercialised K12 tutoring, these students are weaker in scientific knowledge, self-learning ability, and independent thinking, which shows the enormous negative externalities of extracurricular K12 tutoring.

One characteristic of K12 tutoring is that the ones who pay are parents — most of whom did not do well academically when they were students, or else they would be able to guide their children themselves — while the users are students, most of whom are also not doing well academically. Their only clear criterion is that the students score in school exams. And once tutoring organisations are hijacked by capital, then scale, reproduction potential, and profitability become the main considerations.

One approach is to spread anxiety through advertising, to get parents to bring their children for a trial course, assuring them of immediate improvements in the children’s results. And because the classes are not cheap — fees easily cost thousands of RMB — parents would not easily believe in a few lines of ad copy. So, expensive advertising would only bring in trial users for these tutoring companies. And only after their children achieve some results in the school exams, would parents be convinced to pay for these courses.

...tutoring agencies have to increase the intensity of exercises by drilling students, because their only effect comes from forced memorisation. And so, students’ general abilities and time for their interests and hobbies is all taken up, leading to further negative effects.

As a result, most of the time, the teachers at tutoring agencies can only take the most short-term approach to training students — that is, answering questions by memory, rather than developing students’ overall grasp of the field of knowledge. Such an approach is detrimental to students’ long-term learning ability, knowledge, and thinking ability. All students learn is to answer questions by rote memorisation. And to make sure the effects of this method last long enough for parents to renew payment two or three times, tutoring agencies have to increase the intensity of exercises by drilling students, because their only effect comes from forced memorisation. And so, students’ general abilities and time for their interests and hobbies is all taken up, leading to further negative effects. This is the fundamental logic behind commercialised K12 academic tutoring.

Many claims that China stopping capital from going into the K12 tutoring sector is high-handed and wrong, because as long as there are exams to deal with, parents’ anxiety and pressure on children will not change. These comments actually show a lack of awareness of the current situation in the education sector.

If it was just the pressure of competition and parents’ anxiety, and if the competition that the tutoring sector brings to students is good in the long term, then the authorities would only make appropriate adjustments to such competition. But the fundamental reason for the authorities’ strong intervention to make the K12 tutoring sector non-profit and non-capitalist is because the capitalist system of client acquisition has led to a widespread and long-term decline in students’ capabilities, and it wants to end the negative externalities.

...their largest investments are not in pedagogical studies, but advertising, which is actually comparable to their operating costs.

There is another angle from which we can see the true nature of companies that operate under the banner of education: the income and spending of tutoring sector titans.

Among these listed companies, TAL Education Group (including its Xueersi online school) is the largest, as its brand was the first to be established, so that it has an edge in recruiting students. The other titans are chasing TAL, and their largest investments are not in pedagogical studies, but advertising, which is actually comparable to their operating costs. So, even from the perspective of capital, the core competitiveness of these educational companies is not education, but sales tactics.

If one understands the negative externalities of combining capital with K12 tutoring, one would understand why the Chinese government has come up with such a harsh policy.