Effect of US politicians' frequent visits to Taiwan cannot be underestimated

Following US House Speaker Nancy Pelosi’s visit to Taiwan, visits by other US politicians have come fast and furious, with the latest a delegation led by Democrat Stephanie Murphy. But while these visits show US support for Taiwan, they also sometimes come with an agenda. How will Taiwan navigate such a situation amid pressure from Beijing? 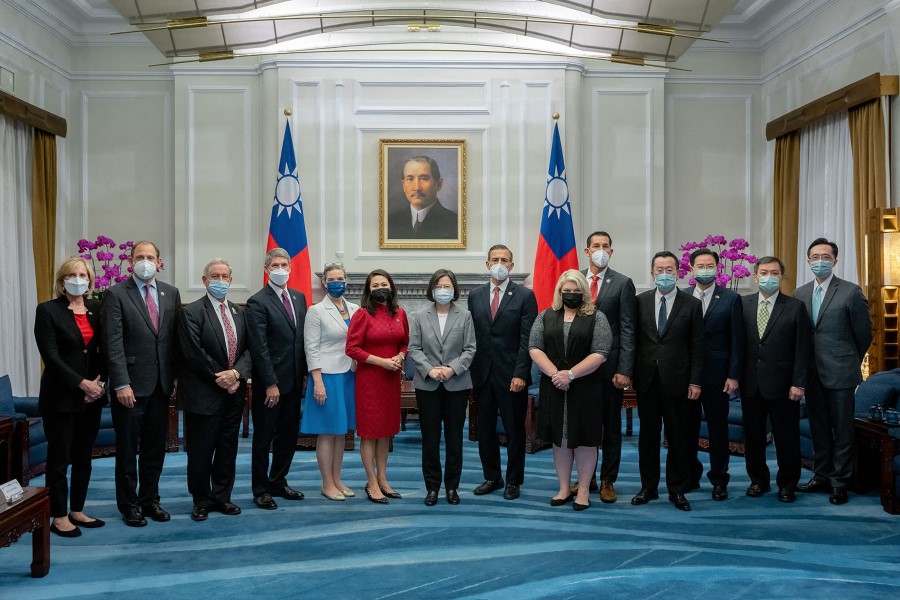 Candice Chan - 28 November 2022
Often referred to as the world’s economic “canary in the coal mine”, South Korea has seen its economy tumble over the past year, impacted by external factors such as US interest rate hikes and signs of recession in key trade partners. The accumulation of domestic factors — currency crisis, tumbling stock market and rising inflation — is also hitting the South Korean economy hard. However, this industrial powerhouse has the domestic means to climb out of the doldrums.
Read more
Translated by Candice Chan on 9 September 2022

A bipartisan delegation led by Democrat and House Armed Services Committee member Stephanie Murphy met with Taiwan President Tsai Ing-wen on 8 September, becoming the seventh US delegation this year to visit Taiwan, and the sixth since August.

Murphy’s visit did not cause much commotion in Taiwan, probably because the flurry of visits by US politicians has become second-rate news, compared with the news about Democratic Progressive Party’s standing in the local elections, and celebrity Rainie Yang’s comment that eating seafood is “extravagant” in Taiwan.

Nonetheless, the effect of these frequent visits by US congress members cannot be underestimated. Murphy’s eight-person delegation is said to be the largest for the current US congress. At the meeting, Tsai said that Taiwan will continue to work with the US to forge even closer economic ties and sign a high-standard trade agreement, and hopes to sign an Avoidance of Double Taxation Agreement.

Murphy echoed Taiwan’s call for a high-standard free trade agreement, but neither side revealed if there were discussions on military or intelligence cooperation.

Apart from personal beliefs, the purpose of the US politicians’ high-profile political support is also to raise their own profile and raise funds, with some politicians making very “open and transparent” commercial requests.

The Taiwan authorities have reiterated that these visiting US politicians are good friends of Taiwan, highlighting that even under pressure from Beijing, the US is showing firm bipartisan support for Taiwan. While this is true, there is also the element of political trade with various quid pro quos.

Apart from personal beliefs, the purpose of the US politicians’ high-profile political support is also to raise their own profile and raise funds, with some politicians making very “open and transparent” commercial requests. For example, on 15 April, Lindsey Graham — Republican representative for South Carolina, where Boeing 787s are assembled — led a delegation to Taiwan. When meeting Tsai, he seemingly became a spokesperson for Boeing and said bluntly that he hoped Taiwan would buy Boeing’s 787 Dreamliner jets.

Previously in June, Graham and US Senate Foreign Relations Committee chair Bob Menendez, who was also part of Graham’s delegation to Taiwan in April, jointly introduced the groundbreaking Taiwan Policy Act of 2022.

The Senate Foreign Relations Committee was initially scheduled to consider the bill on 3 August, but delayed it due to Pelosi’s Taiwan visit. It was later confirmed on 28 August that the bill will be considered on 14 September. Two days later, China Airlines announced its plan to purchase Boeing 787 planes.

The Taiwan Policy Act of 2022 proposed by Menendez and Graham is described as being tantamount to setting off an “atomic bomb” in China-US relations. It would elevate Taiwan-US relations to quasi-official relations, which would not only have a far greater impact than Pelosi’s Taiwan visit, but might even shake the foundations of China-US diplomatic relations. In a joint press release, the bill’s sponsors pointed out that the bill represents “the most comprehensive restructuring of US policy towards Taiwan since the Taiwan Relations Act of 1979”.

Regardless, the fact that the bill was introduced bears testament to the effectiveness of Taiwan’s efforts in the US Congress and the influence of pro-Taiwan US representatives and senators.

The bill designates Taiwan as a “major non-NATO ally” and would rename the “Taipei Economic and Cultural Representative Office” to the “Taiwan Representative Office”. It also specifies, “Not to be construed as entailing restoration of diplomatic relations with Taiwan or altering the US position on Taiwan’s international status, directs the Secretary of State to rescind administrative guidance that inhibits Taiwanese officials from displaying symbols of Taiwanese sovereignty, including the flag of the Republic of China.” The bill also pledges “almost US$4.5 billion in security assistance over the next four years” to bolster Taiwan’s defence capabilities.

It is still too early to tell if the Taiwan Policy Act of 2022 will be passed in the US Senate and ultimately become law. Regardless, the fact that the bill was introduced bears testament to the effectiveness of Taiwan’s efforts in the US Congress and the influence of pro-Taiwan US representatives and senators. US representatives and senators could oppose or even overturn the considerations and decisions of the executive branch.

Murphy sent a particularly strong message from the US Congress in her recent opening speech when she met Tsai, stating that her visit symbolises the Congress’s “rock-solid commitment” to Taiwan. She also emphasised that Congress is a “co-equal branch of the American government” and has “the power to craft legislation and policy that often remains in place across multiple presidential administrations”.

The US adopts a system of separated powers under which the three branches of government (executive, legislative, and judicial) are kept separate. With the Biden administration’s low approval rating, Congress already disregards the executive branch’s considerations.

Coupled with the anti-China bipartisan consensus, the president is also reluctant to stand in direct opposition to them — Pelosi’s Taiwan visit despite the Pentagon’s advice is a case in point. Chaos in the US’s political arena has added new variables and uncertainties to China-US relations, making it even tougher to build mutual trust. Following Pelosi’s Taiwan visit, US politicians can still continue with their "salami-slicing" tactics on Taiwan, until they cut their elbows.

Related: Implications of Xi Jinping resuming overseas trips before 20th Party Congress | Do the Taiwanese people want reunification? | Five big questions about Nancy Pelosi’s Taiwan visit | Why it’s right that US policy on Taiwan has not changed | China cannot afford to be impulsive on Taiwan