As the pandemic drags on with the new Omicron variant, Hong Kongers’ mistrust of the government is far from concealed. Some of them have taken to “resisting” government efforts in containing the pandemic. They, for example, have stopped using contact tracing apps or provided false information. Zaobao journalist Tai Hing Shing reports. 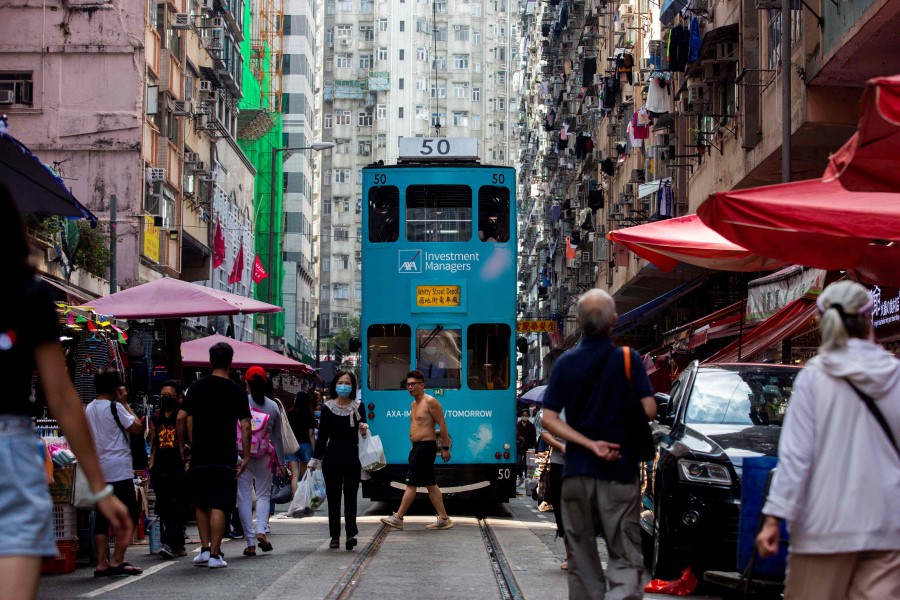 A tram makes its way through a street market in the North Point district of Hong Kong on 5 November 2021. (Isaac Lawrence/AFP)

Candice Chan - 5 August 2022
China's "Foundation Plan" for iron ore has gained much official support, and is aimed at reducing reliance on foreign sources of iron, including Africa and Australia. The only way to do this effectively is for China to ramp up mining of its own iron resources. However, these resources are scattered and difficult to access, and of lower grade. This means China has its work cut out if it is to succeed.
Read more
Translated by Candice Chan on 4 January 2022

The pandemic that has ravaged the world for nearly two years has not disappeared with the new year, but in fact taken a turn for the worse. Even Hong Kong, with almost zero cases for months, has also seen locally transmitted Omicron cases recently, leading to worries of new waves.

Public opinion has recently been directed against the Cathay Pacific staff who breached Covid-19 regulations. Investigations by the authorities showed that the first locally transmitted Omicron cases in this current wave originated from a Cathay Pacific air crew member who went out despite being infected with the Omicron variant. The next two weeks is a crucial period in Hong Kong’s fight against Omicron.

On the surface, the recent community spread of Omicron has to do with selfish behaviour by certain individuals, as well as a failure by the Hong Kong government to gatekeep properly. However, the biggest challenge in Hong Kong right now is not the selfishness of some people, but the disunity of its residents.

...since the anti-extradition movement, many Hong Kongers are deeply mistrustful of the Hong Kong government, and often — intentionally or otherwise — do not go along with the government’s policies against the pandemic

...some pro-democracy people objected to the arrival of a mainland China support team, and raised suspicions that China-funded testing organisations would “steal Hong Kongers’ DNA data”...

A form of protest

Looking back at the past two years, most Hong Kongers have abided by the rule to wear masks in public places, showing that Hong Kong is a mature society. But on the other hand, since the anti-extradition movement, many Hong Kongers are deeply mistrustful of the Hong Kong government, and often — intentionally or otherwise — do not go along with the government’s policies against the pandemic, so that efforts are compromised.

When the pandemic first started in Hong Kong in 2020, the Hong Kong government decided to set up testing and quarantine centres in some areas, and to take in close contacts of infected cases. This policy was well-intentioned, but that was a period of extreme politicisation, and some Hong Kongers took to the streets in protest, while some even set fires at designated centres, disrupting the authorities’ pandemic efforts.

Subsequently, to help Hong Kong with its pandemic efforts, the Chinese central government proposed free testing for all residents, but out of political considerations, some pro-democracy people objected to the arrival of a mainland China support team, and raised suspicions that China-funded testing organisations would “steal Hong Kongers’ DNA data”, and refused to get tested.

After that, while the vaccines were acknowledged to be safe and effective, many medical personnel with clear political stands refused to use them, and even publicly urged Hong Kongers not to get vaccinated, putting service users at risk of the virus.

After the Chinese government implemented the Hong Kong national security law in June 2019, the first- and second-line political figures of the pro-democracy camp either migrated or went to jail, and peace was finally gradually restored to Hong Kong. But some pro-democracy supporters who stayed in Hong Kong were undaunted, and switched to “soft resistance” against the government.

Most Hong Kongers are well versed in digital technology but because they wanted to rebel against the government, some of them refused to use the app...

For example, in response to the pandemic, the Hong Kong government launched the LeaveHomeSafe app, a digital contract tracing app. In the early stages, the use of the app was entirely voluntary. Hong Kongers could choose to fill out paper slips instead of using the app when entering various premises. Most Hong Kongers are well versed in digital technology but because they wanted to rebel against the government, some of them refused to use the app as it was deemed to be an “infringement of personal privacy”.

Over the past six months, whenever I walked past some restaurants, I would see some groups of youths filling out paper slips because they refused to download and use the LeaveHomeSafe app. Hong Kong media reported that many people put down false information — such as a fake handphone number — just to fool around with the government.

Recently, the LeaveHomeSafe app has been more widely used and it has become mandatory at all restaurants since last month. But as a saying goes, “The higher-ups have policies while the lower rungs have their own ways of getting around them.” Fake LeaveHomeSafe apps have also surfaced on the internet. It was not until the police arrested some users on suspicion of “using false instruments” that the situation improved.

However, some radical Hong Kongers still insist on joining the “non-cooperation movement”. Since the Hong Kong government announcement that all restaurant patrons had to check in using the LeaveHomeSafe app, some people have started a “PicnicSafe” (安心野餐) Facebook group urging Hong Kongers not to dine in but to order takeout and have picnics instead as an expression of their dissatisfaction towards the government.

In this protracted war against the Covid-19 pandemic, the Hong Kong government should think hard about how it can regain the people’s trust; at the same time, Hong Kongers should look at the big picture and show restraint.

The creators of the Facebook page said they only expected a membership of 500 people at most. But following media reports, over 1,500 have joined, far exceeding their expectations. As a result, there are people picnicking at parks, staircases and various other public spaces from time to time. They are oblivious to curious passersby and seem to be having a good time.

Over the past year, Beijing’s tighter grip on Hong Kong has diminished room for freedom of expression. It is only normal for Hong Kongers to resist such changes. Nonetheless, health should be the people’s first priority. If the last line of defence against the pandemic comes crashing down, no one can escape unscathed. Hong Kongers who play tricks in the name of “soft resistance” against the government are in fact childish and selfish. In this protracted war against the Covid-19 pandemic, the Hong Kong government should think hard about how it can regain the people’s trust; at the same time, Hong Kongers should look at the big picture and show restraint. These are for the greater good of Hong Kong society.