US-based academic Wu Guo observes that white Americans without a university education are still the group in the country most vulnerable to the ill-effects of globalisation. With manufacturing moving overseas to countries such as China, many of these Americans doing “hands-on jobs” as blue-collar workers lost their jobs and had their middle-class dreams shattered. At the same time, they are not able to leapfrog to hi-tech manufacturing that calls for specialised skills. How can this serious issue be tackled? Would bringing back manufacturing jobs from China help? 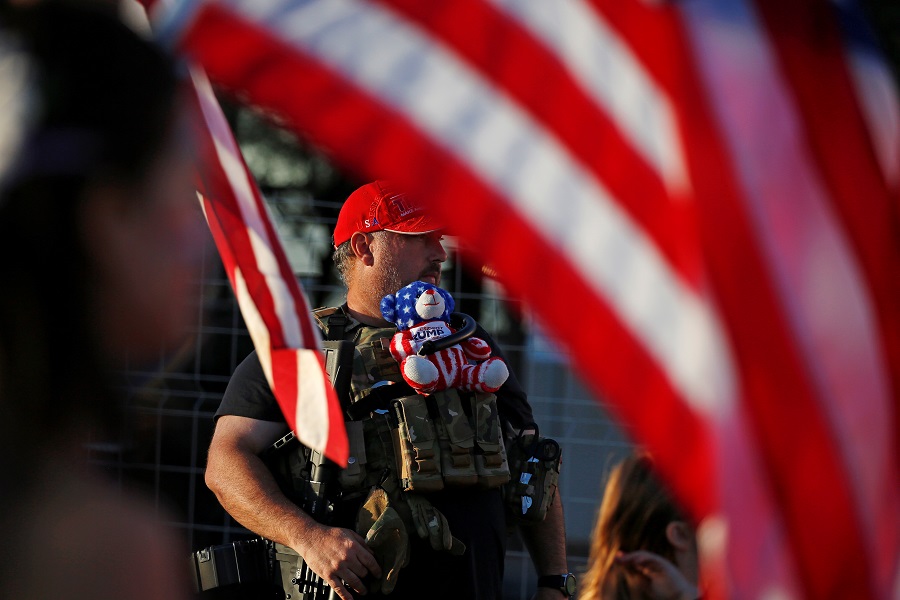 A supporter of US President Donald Trump carries a teddy bear and a semi-automatic rifle at a "Stop the Steal" protest after the 2020 US presidential election was called for Democratic candidate Joe Biden, at the Maricopa County Tabulation and Election Center (MCTEC), in Phoenix, Arizona, US, 9 November 2020. (Jim Urquhart/Reuters)

Grace Chong - 25 January 2023
With rumblings of US House Speaker Kevin McCarthy possibly visiting Taiwan in spring, Yang Danxu observes that this will not be the last we see of the “Taiwan card” being played by US politicians as they move into the second half of the current US presidency.
Read more
Translated by Grace Chong on 10 November 2020

From the time Donald Trump was elected president of the US in 2016 until now, the world has witnessed the internal divisions in American society, regardless of who moves into the White House come January. Trump and the emergence of “Trumpism” did not solve the problem but it shed light on the social issues and internal crises in American society that have been building up over time. These crises have allowed Trumpism — characterised by conservative nationalism and radical populism — to breed on American soil.

To me, an important factor that precipitated the fragmentation of American society is globalisation. I am not refuting the importance of globalisation but just pointing out that the trend towards free trade and free flow of capital led by the US after World War II led to an “unexpected consequence”. The outflow of capital resulted in a sharp decline in traditional industries in the US and widespread frustration and anger among blue-collar workers. In other words, while the US benefited from globalisation in terms of expanding its soft power, enjoying lower production and consumption costs, and letting multinational companies reap higher profits, globalisation has also, to a certain extent, led to a backlash in the US, by way of the country paying the enormous cost of social fragmentation.

...as far as the people are concerned, regardless of how low the prices are, it cannot alleviate the economic pressure and psychological impact of being unemployed.

In the US’s rust-belt region along the Great Lakes that I live in, large numbers of factory workers became unemployed because the companies they worked for relocated overseas. Manufacturing plants were abandoned and the economy in these towns, once buoyant, went down. On top of that, the population in these towns decreased year by year. The whole situation upset the local residents greatly.

Although ordinary Americans do enjoy the benefits of low prices for consumer items in their daily lives, as far as the people are concerned, regardless of how low the prices are, it cannot alleviate the economic pressure and psychological impact of being unemployed. Thus, among the blue-collar workers in the US, there is a general mentality of “wanting a job” rather than “caring about prices”.

In fact, father-son duos are a common sight in large factories; they come from blue-collar families who have worked in the same industry their whole lives with no other options of making a living.

A way of life upended

When they are employed, as they have a relatively high salary and have their rights and interests protected by the unions, blue-collar workers in the US can easily live a comfortable middle-class life with a house, a car, a pet, and a few children. Going to university and spending their time reading and writing are unattractive to many American males who have no interest in studying and who are more interested in hands-on jobs. Besides, going to a better university adds on to their financial burden as well.

In my daily life, I often come into contact with skilled white American workers such as licensed air conditioner installation technicians, carpenters, and plumbers — all of them are uninterested in academia and prefer hands-on jobs. Many of these workers learnt their skills from their fathers when they were young, and later moved on to vocational schools to earn a diploma. In fact, father-son duos are a common sight in large factories; they come from blue-collar families who have worked in the same industry their whole lives with no other options of making a living. Here, we also observe a cultural phenomenon tinged with nostalgia as sons inherit the skills of the father.

A paradox here is that the high salaries and welfare of American blue-collar workers are the very reasons why the managements of many companies decided, in a bid to lower costs, to seek new horizons overseas, to build factories in developing countries, and to hire local workers. The winners in this process are the entrepreneurs who have turned to foreign investment, and the local workers of the host countries who have gained job opportunities (keeping in mind the environmental damage wreaked by these factories, and the potential exploitation of labour by doling out low wages), as well as global consumers who, as a result, enjoy relatively low product prices. However, in this whole process, local blue-collar workers in the US have become an abandoned class. Their middle-class dreams are also shattered as a result of globalisation.

Unable to transition to hi-tech industries

For the US, while globalisation has driven much of the manufacturing sector overseas and led to a global flow of capital, domestic industries have also rapidly upgraded and become more high-tech. No doubt, the US still holds a monopoly on several cutting-edge technologies and is constantly innovating in these sectors. However, the process is largely reliant on top talents from around the world who mostly went through postgraduate education in the US, benefiting from the global flow of talent. However, the adoption of high-end technology and globalisation of talent in US domestic industries has left blue-collar workers behind as casualties of the times.

... most of these people live in the Midwest and rural areas, where the local communities are far less educated, open-minded, and cosmopolitan than those living on the east and west coasts.

Blue-collar workers without university qualifications cannot continue relying on traditional industries to maintain their decent lifestyle, but neither can they enter the high-tech sectors, hence their means of survival and self-esteem are dealt a double blow. Given this trend, white Americans without a university education are becoming a prominent social category.

Geographically speaking, most of these people live in the Midwest and rural areas, where the local communities are far less educated, open-minded, and cosmopolitan than those living on the east and west coasts. In terms of embracing globalisation, understanding the world outside of the US, and tolerance of alternative lifestyles and identities, the coastal and inland areas of the US have become increasingly divergent over the past few decades, and the gap is widening. This is obvious from the 2020 electoral map.

I definitely do not deny the value of globalisation. But US observers also need to recognise the diverse and complex consequences of globalisation and its impact on the US, as well as the price paid by ordinary Americans and their sentiments against globalisation because they feel they are not benefiting from it.

More young people will have to go through higher education that will open their minds and give them life skills and a modern perspective.

But the ultimate solution cannot be shouting to bring back manufacturing to the US. In fact, Americans themselves may not be willing to tough it out working for hours on an assembly line. When I spoke with an American friend about the strict management in China’s factories and the long hours and backbreaking hard work, my friend shook his head and said today’s young Americans would not work like that.

From my two decades of observation in the US, while globalisation has led to some negative effects in the US, society will continue to move forward and not back. More young people will have to go through higher education that will open their minds and give them life skills and a modern perspective. This will gradually reduce the gap between the rural Midwest areas and the developed coastal areas, rather than allowing the former to become even more closed and conservative, driven by hostility and xenophobia.