India needs a united, democratic Myanmar outside China's strategic orbit. Can that happen?

In recent decades, India’s engagement with Myanmar has been shaped by Delhi’s growing regional contestation with Beijing as well as its growing strategic partnership with the US. As a close neighbour with clear stakes in the region, India has to tread carefully. In the aftermath of Myanmar’s latest military coup, how will it tread even more lightly, neither helping to drive Myanmar into the arms of China, nor forsaking the values it shares with allies such as the US? 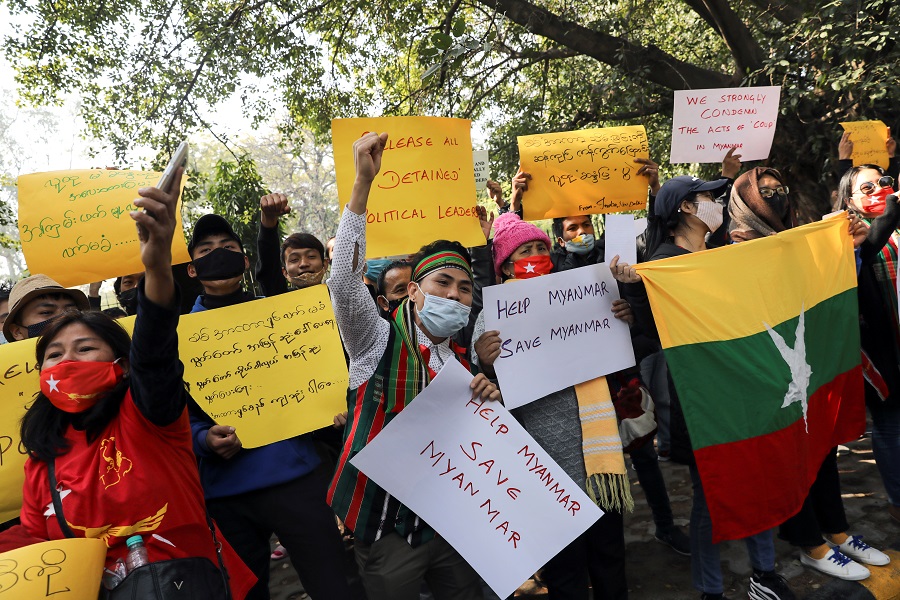 Myanmar citizens living in India hold placards and shout slogans during a protest against the military coup in Myanmar, in New Delhi, India, 5 February 2021. (Anushree Fadnavis/Reuters)

Grace Chong - 30 January 2023
Amid ongoing tensions, a high-level visit by US Secretary of State Antony Blinken to China in the coming week shows hope for improved relations between the two economic powerhouses. Zaobao correspondent Yu Zeyuan notes that while the meeting may not produce practical results, it is a much needed exchange to manage and control China-US relations from worsening.
Read more
Translated by Grace Chong on 10 February 2021

As an important neighbour of Myanmar, India has a deep and abiding interest in the political and strategic evolution of a nation that is a land bridge between the subcontinent, China, and Southeast Asia. As does eastern India, Myanmar borders the Bay of Bengal that is at the heart of the Indo-Pacific geography.

In recent decades, India’s engagement with Myanmar has been shaped by Delhi’s growing regional contestation with Beijing. India’s growing strategic partnership with the US is also becoming an important factor in Delhi’s Myanmar policy.

India is acutely aware that it will be a mistake to attribute every development within Myanmar to great power politics in the region. It is the dynamic interaction of internal and external developments — both of whom have an independent logic of their own — that India and other neighbours must deal with.

For the neighbours, the stakes in Myanmar are broader than the political nature of the current regime. They cannot afford to view the country only through the single lens of democracy.

If intercontinental distance gives US and Europe great clarity on the internal developments in Myanmar, proximity muddies the waters for India and complicates Delhi’s policy-making. The same is true for China and the ASEAN countries as well as Japan. For the neighbours, the stakes in Myanmar are broader than the political nature of the current regime. They cannot afford to view the country only through the single lens of democracy.

President Joe Biden was quick to condemn the coup and warn that it might reimpose sanctions. He also said that the US was “taking note of those who stand with the people of Burma in this difficult hour”.

China in contrast was far more cautious, and it came as no surprise that it did not refer to democracy. But it was quick to reject the widespread claim that it supports the army coup. Its emphasis was on the importance of “upholding political and social stability”. Beijing also called on the opposing forces in Myanmar to  “appropriately resolve their differences”.

The ASEAN members were divided between those wanting to treat it as an internal development and others calling for clear criticism of the military’s action. Brunei, the current ASEAN chair, issued an ASEAN Chairman’s Statement calling for “dialogue, reconciliation and the return to normalcy” and cited the principles of democracy enshrined in the ASEAN Charter.

Japan’s position was like that of ASEAN. Unlike the US and some of its allies, the foreign ministry in Tokyo refused to condemn the coup but expressed strong concern and called for a release of the political leaders and restoration of democracy. Japan’s defence ministry, however, underlined Tokyo’s strategic concerns.

State Minister of Defence Yasuhide Nakayama cautioned against targeting Myanmar’s military. He said in a Reuters interview, “If we do not approach this well, Myanmar could grow further away from politically free democratic nations and join the league of China.”

For India, dealing with the tricky situation in Myanmar is a familiar one. Three decades ago, in 1988, when Myanmar (then Burma)’s military cracked down on the democracy movement, Delhi rallied behind the protestors and offered sanctuary to many Burmese activists.

By the early 1990s though, Delhi had to review its policy as the Myanmar military consolidated its rule and turned towards China amidst Western hostility. Even more important was India’s need for support from the Tatmadaw in countering multiple insurgencies in its northeast. India’s restive land border with Myanmar is about 1500 km long.

India’s constructive engagement with the Myanmar military continued through the next decade and a half. Delhi defended its engagement with Yangon when the issue came up in the conversations with the US and Western leaders.

After the transition to democracy began in 2011, India built sustained relationships with both the civilian leaders and the military. And as India woke up to China’s growing maritime profile in the Indian Ocean,  India expanded its naval cooperation with Myanmar that was marked in 2020 by the transfer of a Kilo-class submarine.

India watched warily as Suu Kyi warmed up to China amidst western hostility and embraced China’s Belt and Road Initiative that Delhi had rejected as a threat to the region.

If India was pleased with the changing political orientation of Myanmar, it also had to iron out new wrinkles in the bilateral relationship over the last decade. The emergence of the Rohingya crisis in 2015, and the consequent tensions between Bangladesh and Myanmar put Delhi in a difficult spot. Given the friendly ties with both the neighbours, Delhi was unwilling to displease either. Instead of condemning the Myanmar military like the West, India made some unsuccessful efforts to mediate the issue.

As Aung San Suu Kyi rallied behind the nationalist sentiment in Myanmar on the Rohingya issue, the West began to turn against a leader that it had lionised as a champion of democracy. India watched warily as Suu Kyi warmed up to China amidst western hostility and embraced China’s Belt and Road Initiative that Delhi had rejected as a threat to the region.

Whither democratic values shared with the US?

In its immediate reaction to the coup in Myanmar, Delhi expressed “deep concern” and affirmed its longstanding and “steadfast support for the democratic transition” in Myanmar. It also insisted that “the rule of law and the democratic process must be upheld”.

But unlike communist China, democratic India cannot ignore the question of its neighbour’s internal political orientation. The shared commitment to democracy has also become an ideological pillar holding up India's deepening partnership with the US. In the wake of the coup, the question of democracy in Myanmar continues to figure prominently in the conversations between Delhi and Washington, for example in President Biden’s first call with Prime Minister Narendra Modi on 8 February.

India’s current presence in the UN Security Council (UNSC) as a non-permanent member (2021-22) has given some diplomatic role for Delhi in crafting the international response to the developments in Myanmar. Indian media reports say Delhi played a critical role in generating consensus in the UNSC between the West that wanted unequivocal condemnation of the Tatmadaw and others like China and Russia that were opposed to isolating the regime.

India needs a peaceful frontier, a united Myanmar that is at peace with itself, a democratic and sovereign Myanmar that is not part of China’s strategic orbit, but a sustainable land bridge and sea link to Southeast Asia.

The unanimous UNSC statement issued on 4 February read: “They stressed the need to “uphold democratic institutions and processes, refrain from violence and fully respect human rights, fundamental freedoms and the rule of law. They encouraged the pursuance of dialogue and reconciliation in accordance with the will and interests of the people of Myanmar.”

The factors shaping India’s Myanmar policy have not changed with the February coup. India needs a peaceful frontier, a united Myanmar that is at peace with itself, a democratic and sovereign Myanmar that is not part of China’s strategic orbit, but a sustainable land bridge and sea link to Southeast Asia.

Unlike in the past, Delhi is far more self-assured today and is less likely to flip flop between condemnation and embracing the armed forces. It is expected to follow a balanced approach between its values and its interests in Myanmar. A sensible middle path also lets Delhi better adapt to the rapidly shifting ground within Myanmar and the response of great powers and regional institutions to the current crisis.

Related: Myanmar coup and the future of geopolitics in Asia | Balancing Chinese influence in Myanmar? India must avoid head-to-head competition | Xi’s visit to Myanmar and implications for Southeast Asia | When will Biden call China?