When will Biden call China?

Even with a new US president in place, US-China relations look set to remain uncertain as poor communication between them continues, like chickens and ducks trying to have a conversation. Except they’re not talking to each other at the moment — not on the phone at least. 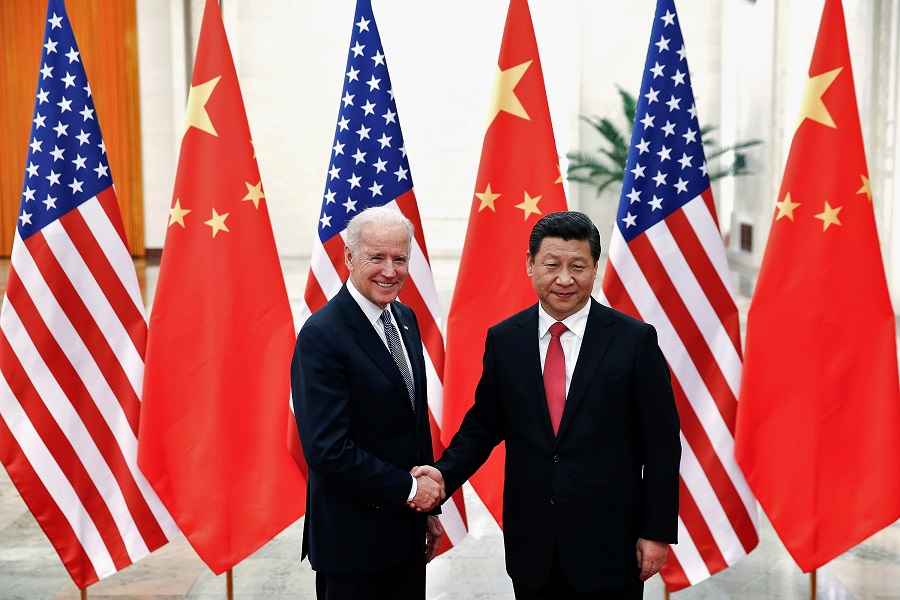 In this file photo taken on 4 December 2013, Chinese President Xi Jinping shakes hands with then-US Vice President Joe Biden (left) inside the Great Hall of the People in Beijing, China. Since his inauguration, Biden has yet to speak to Xi on the phone. (Lintao Zhang/Pool/File Photo/Reuters)

Grace Chong - 27 January 2023
Regulators are ramping up efforts to cull poorly performing firms and those that violate the rules or break the law. A record number of companies got the boot from Chinese mainland stock exchanges last year, and that number could even double in 2023.
Read more
Translated by Grace Chong on 5 February 2021

It seems that newly-elected US President Joe Biden’s China policy is not only one of joining forces with its allies to contain China, but also that of waiting for change to happen. It has been two weeks since the installation of the Biden administration but Biden has yet to speak with his Chinese counterpart Xi Jinping. White House press secretary Jen Psaki and State Department spokesman Ned Price even said on Tuesday that speaking to allies and partners came first before speaking to China. Both explained separately that the US needed to gain the upper hand in dealing with its relationship with China and that the first step was to ensure that the US was “in lockstep” with its allies and partners. They added that numerous issues, including climate change, are the ones “in which it is our national interest to cooperate on a limited basis with China”.

Based on his phone conversations alone, Biden’s priorities for his administration are crystal clear. Two days after he was sworn in, Biden called a close neighbour, Canadian Prime Minister Justin Trudeau. This is related to the US’s internal affairs as one of the 17 executive orders he signed on his first day in office included rescinding the permit for the Keystone XL pipeline which would deal a big blow to stakeholders in the US, Trudeau, and oil-producing regions in Canada. Thus, Biden needed to communicate directly with Trudeau on this. However, the pipeline issue is but a minor conflict between the US and Canada. After all, Canada has always considered the US as its most important ally and defence partner. Trudeau was also the first national leader to congratulate Biden on his electoral victory on 7 November 2020, breaking the silence on the international stage. Thus, Biden was returning the favour by speaking to Trudeau first. The pair spoke on the phone for 30 minutes.

But does this mean that the sooner one sends his congratulations, the sooner one gets a phone call? Absolutely not. A day after speaking to Trudeau, Biden spoke with Mexican President Andrés Manuel López Obrador. Unlike Trudeau, López Obrador — popularly known as Amlo — only congratulated Biden on 15 December 2020, and was one of the last few international politicians to do so (China congratulated him on 25 November 2020). The pair discussed immigration issues, one of the first few policies of the former Donald Trump administration that Biden has set out to reverse. Back then, Trump had insisted on deporting millions of undocumented immigrants. Biden, on the other hand, plans to offer a path to citizenship to 11 million undocumented immigrants, most of which are Mexicans. This is also one of the most ambitious immigration policies of the US in years.

China-US relations at the moment can be summed up in one word: cold.

To the leaders of Europe and NATO, Biden reaffirmed the US’s commitment to NATO and expressed his willingness to strengthen bilateral relations with its traditional allies. These are clearly done to reverse the estrangement of relations between the US and NATO under Trump. Trump had openly criticised NATO numerous times when he was in office, and also mentioned several times privately that he wanted the US to leave NATO.

During the phone call between Biden and Putin, both leaders agreed to a five-year extension of the New START nuclear arms reduction treaty. Biden also exerted pressure on Putin on issues including Russia’s interference in the US elections, cyber-attacks on the US — such as the SolarWinds hack — and reports of Russia placing bounties on US soldiers in Afghanistan.

Biden not about to reverse last administration’s China policy

Evidently, telephone diplomacy between leaders is not always just a courteous friendly overture; it can also be to express unhappiness, or to thrash out issues. But when all is said, the fact is that Biden has been in contact with Russia, but has not yet spoken with Chinese President Xi Jinping on the phone.

China-US relations at the moment can be summed up in one word: cold. The past few US presidents quickly received congratulatory phone calls from China soon after they were elected. On 14 November 2016, Xi spoke with newly elected Donald Trump; in November 2008, then Chinese President Hu Jintao spoke with Barack Obama. China has always been one of the first countries to speak on the phone with the elected US president. But so far, Biden has not yet spoken with China’s leaders.

But when it comes to Trump’s policies towards China, it is clear that Biden sees nothing to reverse.

Going by the executive orders that Biden has signed, his top priority is to reverse Trump’s policies in fighting the pandemic and strengthening the economy. But when it comes to Trump’s policies towards China, it is clear that Biden sees nothing to reverse. During his confirmation hearing before the Senate Foreign Relations Committee on 19 January 2021, US Secretary of State Antony Blinken said Trump’s “basic principle [towards China] was the right one”.

On 2 February 2021, in a video dialogue with the National Committee on United States-China Relations (NCUSCR), Politburo member and director of the Central Commission for Foreign Affairs Yang Jiechi made a clarion call for US-China cooperation. He also strongly criticised the Trump administration’s extreme and misguided policies against China, warning that issues such as Hong Kong, Tibet, and Xinjiang that involve China’s sovereignty and territorial integrity are a “redline that must not be crossed”. China thinks that “drawing the line” and making clear its stand with such statements will get the US to reboot relations with China; it has only led to resistance. The US response: it wants to align with its allies and partners before talking with China.

But even traditional US allies would not be totally in sync with the US in their policies towards China today. And given his relatively weak position, Biden will have to channel most of his energy to handling domestic affairs before the mid-term elections, and would not antagonise Trump’s supporters over the China issue. Under the circumstances, the best choice is to bide his time. The good news is that the Biden administration also stated on 4 February 2021 that the one-China policy has not changed.

Will this indifference wear away China’s politeness and patience? We shall see.

Then when will the leaders of China and the US speak on the phone? Possibly next week, going by the conversation between Trump and Xi that happened on 10 February following Trump’s inauguration. White House officials have revealed that Biden will first speak with India and South Korea, before getting to China. Will this indifference wear away China’s politeness and patience? We shall see.

China is criticising the US for its misguided policies towards China, while Xi — without naming names — has advocated “fair competition, like competing with each other for excellence in a racing field, not beating each other in a wrestling arena”. On its part, the US is determined to put up a defence against its top strategic rival. Each side is speaking a language that the other cannot understand or take in.

Compared to the growing antagonism over the past few years, China-US relations in the Biden era are rapidly cooling. However, this is not the cold of a Cold War, but a temporary halt and reduction in cooperation. It could have been worse. All that can be done is to face reality and start again from this point on.

Related: Can Biden’s US lead the world? | Has Biden bared his fangs at China? | Biden presidency a turning point for China-US relations? | India gets ready for shifts in US-China relations under Biden | Even as US-China competition intensifies, the world can look forward to a few good things