Japan's support of Taiwan's participation in the WHO Assembly, Chinese military operations in the East China Sea, and Japanese thoughts of delinking Japan-China supply chains have been some of the key issues in Japan-China relations during the pandemic. But the Japanese public is most concerned with the national security law in Hong Kong, according to academic Shin Kawashima. What are the implications for Japan-China relations? And will President Xi Jinping become the first state guest to visit Japan “post-corona"? 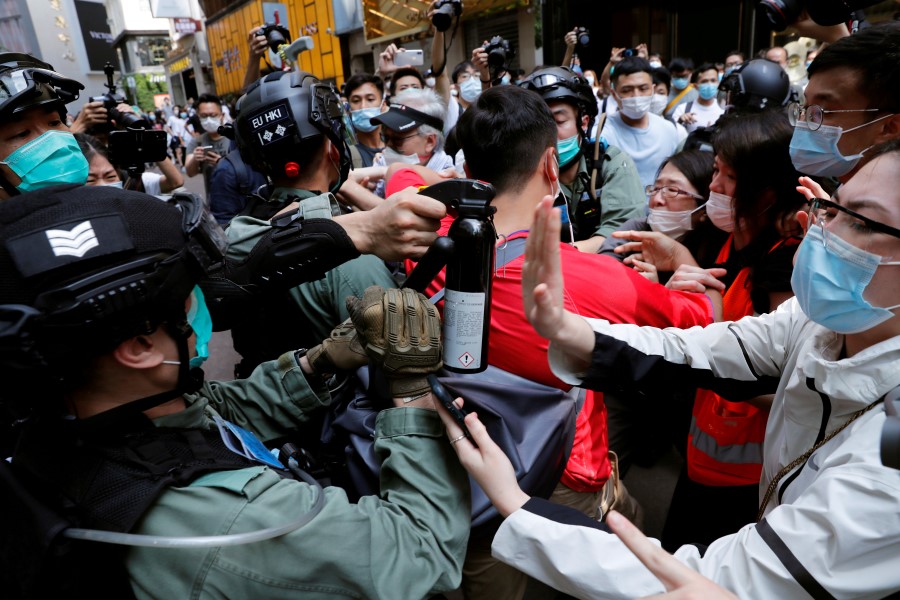 Anti-government demonstrators scuffle with riot police during a lunch time protest as a second reading of a controversial national anthem law takes place in Hong Kong, 27 May 2020. (Tyrone Siu/REUTERS)

Candice Chan - 29 June 2022
Over the past couple of years, there has been an influx of migrants from Hong Kong to the UK. Communities have been forming in various cities, such as London and Manchester. And as Hong Kongers find jobs and settle in, the British way of life rubs off on them. But underneath all that, they remain Hong Kongers at heart.
Read more
Translated by Candice Chan on 3 June 2020

With the first phase of the Covid-19 pandemic finally coming to an end in Japan, the government moved to lift the state of emergency on 25 May. It is too early to let our guard down, but the instructions to stay home will likely become more relaxed and economic activities will gradually resume. In foreign relations, we can expect travel to slowly recover, guided by a principle of reciprocity. In particular, restoring exchanges with strong economic partners is imperative. At the same time, we will probably have to start thinking about ways to conduct business that take into account risks like the current pandemic.

Following the Chinese National People’s Congress (NPC) held in May, major Japanese media outlets focused on the increase of the defense budget by more than 6%, but it was the Hong Kong issue that most interested the Japanese public.

Amid this recovery trend, we not only have the Tokyo Olympics postponed to 2021, but another matter of concern, which is Chinese President Xi Jinping’s visit to Japan which had been postponed earlier in the year. The question is whether President Xi Jinping will become the first state guest to visit Japan “post-corona”, with the country only just starting to recover from the coronavirus epidemic. It is easy to imagine how this can turn into an issue. However, Japanese public opinion has become even more critical of China in the wake of the latter’s Covid-19 response, and we are already seeing some changes in Japan’s China policy.

First, although this is something that was evident since previously, Japan supported Taiwan’s participation in the WHO Assembly as an observer. Second, Defense Minister Taro Kono, in particular, has been critical of the increase in the activities of the People’s Liberation Army and the China Coast Guard in the East China Sea and near Japan during Covid-19. Third, in March, Prime Minister Shinzo Abe spoke about supporting companies wanting to withdraw from China.

“Under the principle of ‘one country, two system’s [in Hong Kong], it is important that the free and open system is maintained, and that it develops democratically and stably. We expect China to take wise action.” - Yoshihide Suga, Chief Cabinet Secretary

Following the Chinese National People’s Congress (NPC) held in May, major Japanese media outlets focused on the increase of the defense budget by more than 6%, but it was the Hong Kong issue that most interested the Japanese public. Thus, both the Japanese government and Yoshihide Suga, Chief Cabinet Secretary expressed concern about the situation in Hong Kong, making this statement: “Under the principle of ‘one country, two systems' [in Hong Kong], it is important that the free and open system is maintained, and that it develops democratically and stably. We expect China to take wise action.” Compared to previous statements, this one was relatively direct.

Looking at Chief Cabinet Secretary Suga’s Hong Kong-related statements in recent years, in connection with the demonstrations against the extradition bill in June 2019, he said, “Under the principle of ‘one country, two systems’, we hope for Hong Kong to maintain its free and open system, and to develop democratically and powerfully.” Likewise, when there was tension between demonstrators and the police in Hong Kong in August 2019, he said, “Intensifying clashes have injured many, which is a big cause for concern.” He also made this comment: “We strongly hope that the situation can be resolved quickly through peaceful dialogue between the involved parties and that Hong Kong’s stability can be maintained. We will continue to follow the development with interest.”

The Japanese government’s call for “wise action” is a relatively strong expression, also used when South Korea announced the decision not to renew the General Security of Military Information Agreement (GSOMIA) after it lapsed in 2019.

Moreover, when the Hong Kong Human Rights and Democracy Act was established in the United States in late November, he first said, “The government refrains from commenting on the actions of another country’s parliament.” But he later expressed concern and talked about maintaining stability in Hong Kong, saying, “We remain deeply concerned about the recent situation in Hong Kong and wish to continue close communication with the US. We strongly hope for stability to be maintained in Hong Kong under the principle of ‘one country, two systems’.”

While the recent statement by the Japanese government is largely in line with previous ones, it is clear that the expression “We expect China to take wise action” is new. The Japanese government’s call for “wise action” is a relatively strong expression, also used when South Korea announced the decision not to renew the General Security of Military Information Agreement (GSOMIA)* when it was about to  lapse in 2019. The one to make the decision definitely is the other party, but they are more or less saying that the answer about what to do is clear as day.

President Xi’s Japan visit was postponed, but it is important not to overlook how Japan-China relations — especially the Japanese government’s China policy and opinions on China, as well as the Japanese public’s views of China — have changed during the pandemic before we even arrive at the post-corona period.

The General Security of Military Information Agreement (GSOMIA) is an intelligence-sharing pact between Japan and South Korea for the sharing of information on North Korea's military and nuclear activities. South Korea initially said that it would not renew the pact at the end of last year. This was amid escalating Japan-South Korea tensions over issues such as South Korea's victims of wartime "forced labour" seeking compensation from Japanese companies, and Japan imposing export restrictions on South Korea and removing South Korea from its preferred trading partners list. In response, the latter also removed Japan from its preferred trading partner whitelist. After deliberations, reported pressure from the US, and plans for bilateral talks between Japan and South Korea on export controls, the South Koreans decided to return to the agreement, but said that this could change at any time.

Related: Widening perception gap between Japan and China since Covid-19 outbreak | Romance of the Three Kingdoms: US, China and Japan | China’s quest for “great nation” status: A view from Japan