Prime Minister Suga’s first overseas trip shows that an “independent and active” Indonesia is not an easy partner for Japan’s Free and Open Indo-Pacific strategy. 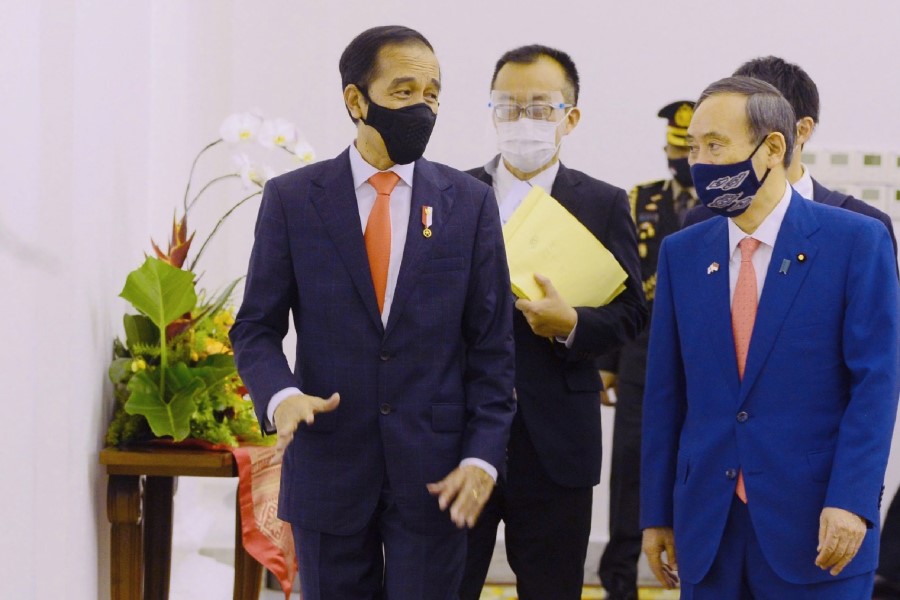 Candice Chan - 30 January 2023
A mall in Shenzhen came under fire for putting up white lanterns with black text as part of its Chinese New Year decorations, while an “ugly” rabbit-shaped light decoration was removed from another mall in Chongqing. Academic Zhang Tiankan muses on tradition and innovation, and the evolution of traditional decorations.
Read more
Translated by Candice Chan on 30 October 2020

Japan’s new prime minister, Yoshihide Suga, visited Indonesia from 20 to 21 October as part of his first overseas trip that also included Vietnam. As the US is in the middle of a presidential election campaign, there was no point for Suga to visit Washington. It would be more fruitful to visit the largest ASEAN member state, Indonesia, as well as the most critical ASEAN member state on the South China Sea issue and the current chair of ASEAN, Vietnam. What did Suga want to achieve in Indonesia and what did he do during the visit?

Suga, on his first overseas trip so early in his term as prime minister, wanted to promote Japan’s Free and Open Indo-Pacific (FOIP) strategy formulated during the preceding Shinzo Abe administration. Suga was Abe’s chief cabinet secretary. Reflecting this continuity, the pattern of Suga’s visit to Indonesia was similar to that of Prime Minister Abe’s in January 2017.

Then, Abe pushed for closer Japan-Indonesia security cooperation, but President Jokowi was only interested in economic cooperation. In the 2017 visit, Abe did not mention the FOIP strategy specifically, but proposed “cooperation among Japan, ASEAN countries, the US, Australia, and India”. His proposal was seen by some in Indonesia as similar to Chinese President Xi Jinping’s One Belt One Road (OBOR, the former abbreviation of BRI) maritime initiative, with The Jakarta Post calling it “an alternative to China’s OBOR”. Jokowi urged Japan to commit resources to help the Indian Ocean Rim Association (IORA) instead. Indonesia chaired IORA in 2015 and 2016.

China, Indonesia’s largest trading partner, has criticised Japan’s FOIP strategy (and that of the Trump administration’s in the US) as a strategy to “contain China’s influence in Southeast Asia” both politically and militarily. Wang Yi, China’s foreign minister, has branded the FOIP an “Indo-Pacific NATO”, consisting of the US, Japan, Australia and India. However, Kuni Miyake, an adviser to Suga’s cabinet, argues that Japan’s concept will focus more on promoting economic and cultural activities as well as rule of law in the region, not military issues.

Before Suga’s visit to Indonesia, Japan’s NHK World reported that the visit would seek to deepen bilateral political and defence/security cooperation, economic cooperation and cooperation in other areas. It further explained that “Japan aims to boost security cooperation with Indonesia. One way it hopes to do this is by accelerating negotiations on the transfer of defence equipment."

During the visit itself, Suga stressed security cooperation, while Jokowi emphasised economic cooperation.

On 13 October 2020, one week before Suga visited Jakarta, he called President Jokowi to express his intention to strengthen the Japan-Indonesia strategic partnership. In this telephone conversation, Suga supported the ASEAN Outlook on the Indo-Pacific (AOIP), which was initiated by Indonesia, that he sees as having “a lot of fundamental commonalities” with Japan’s FOIP. Jokowi thanked Suga for supporting ASEAN and was quoted saying that “Indonesia would work closely with Japan in facing the challenge concerning the region”.

However, on the following day, Indonesia’s Deputy Foreign Minister Mahendra Siregar criticised Japan for doing almost nothing “in the regional effort to beat the Covid-19 pandemic”. Indirectly, he was criticising Suga for focusing too much on traditional security issues.

During the visit itself, Suga stressed security cooperation, while Jokowi emphasised economic cooperation. On 20 October, in his public statement after meeting with Suga, Jokowi did not touch on security cooperation between Tokyo and Jakarta. Jokowi welcomed Suga’s visit and Japan’s offer of a 50 billion yen concessional loan to assist Indonesia’s response to the Covid-19 pandemic, closer healthcare cooperation between the two countries, the formation of a travel corridor for essential business and the relocation and expansion of the operations of major Japanese firms in Indonesia. Jokowi also asked Suga to remove impediments hurting Indonesian goods exports to Japan. According to the Associated Press, Jokowi did agree that the spirit of cooperation between Jakarta and Tokyo should be strengthened “especially in the midst of a sharp rivalry between two World Power Nations”.

Suga did not directly answer Jokowi’s requests. Instead, he addressed the more general issue of continuing bilateral cooperation, especially in infrastructure. He highlighted Japanese participation in building the Jakarta-Surabaya semi-rapid transport rail line and the Patimban port together with other ports in the outer islands. Interestingly the Jakarta-Surabaya railway project was mentioned by Suga, not by Jokowi. This project was awarded to a Japan-led consortium last year to balance the Jakarta-Bandung high-speed rail line which is being built by a China-led consortium.

Suga highlighted that he wanted to expedite the second 2+2 bilateral meeting between the countries’ foreign ministers and defence ministers to foster greater security cooperation. The first such meeting was held in 2015. The Jakarta Post confirmed that Indonesia has agreed on the meeting “to speed up discussions for possible defence procurement deals as well as cooperation in maritime law enforcement”. Indonesia is the only country in Southeast Asia that has agreed to regular 2+2 meetings with Japan.

Suga’s visit was a limited success. It has strengthened Tokyo-Jakarta economic relations, but failed to get the Indonesian support for Japan’s FOIP. Jakarta would like to maintain its “independent and active” foreign policy.