A new Beijing Stock Exchange is good news for technology-focused small- and medium-sized enterprises, especially those with innovation potential but may not fit the listing requirements of traditional exchanges. Not only that, it will likely give a boost to SMEs in the north, helping to balance regional economic imbalances. 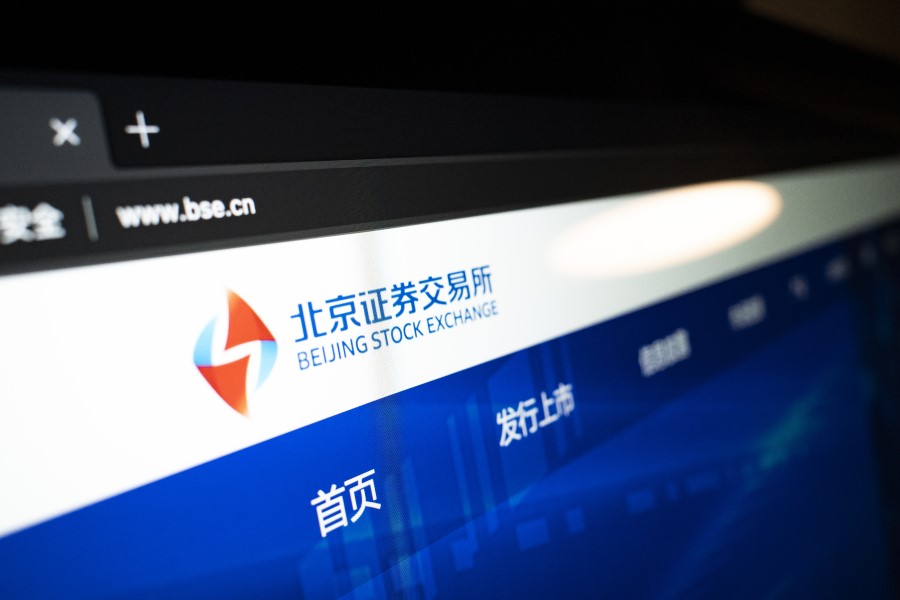 The Beijing Stock Exchange website was tested on 10 September. (CNS)

Candice Chan - 28 September 2022
Hong Kong Baptist University academic Jean-Pierre Cabestan notes that Chinese President Xi Jinping will have his work cut out for him in his anticipated third term. Apart from domestic and international challenges, Xi faces opposing views on the way forward for China’s future. This is the third in a series of four articles on President Xi Jinping and the road ahead.
Read more
Translated by Candice Chan on 20 September 2021

The announcement on 3 September of the establishment of the new Beijing Stock Exchange attracted much domestic and global attention. While many market participants were taken by surprise, it is actually a natural and logical step in Chinese policymakers' long-term plan. History and current circumstances point to the necessity for a new exchange in promoting innovation and the development of technology-driven small- and medium-sized enterprises (SMEs). There is also a reason for locating it in Beijing.

Why a new exchange?

Mainland China is already home to the Shanghai Stock Exchange and the Shenzhen Stock Exchange, so why the need to set up a new exchange?

Historically, private SMEs in China have minimal access to the financial market. While China has a high savings and investment rate, most savings and investments go to the real estate sector or big companies. With inadequate collateral and low short-term profits, SMEs find it hard to directly borrow from banks or go public to sell their equities in the stock market.

Without timely finance, some SMEs were forced to close. Others received money from the shadow banking system, but had to grapple with sky-high interest rates. A third group of SMEs, including Alibaba and Tencent when they just started out, were lucky enough to be funded by venture capital funds (VCs). These usually have better chances to grow and succeed than others.

However, in the early years, most VCs were foreign investors who were subject to various restrictions in China's domestic capital market. As a result, after turning profitable, the SMEs had to go public in the stock exchanges of the US or Hong Kong to circumvent capital control so that foreign investors could reap the capital gains.

The Chinese government has been making a long-term effort to relax the severe financial constraints on SMEs. In December 2003, the Ministry of Science and Technology of China and the municipal government of Beijing proposed a trial to the State Council of China, which was approved in October 2005. This trial would allow the private companies in Zhongguancun Science Park (commonly known as Z-Park) to trade their equities via agreement-based transfers outside of the two existing stock exchanges.

In January 2006, the trial started, listing two companies from Z-Park. Later, this trial included more SMEs from different cities and gradually extended to the whole country.

In January 2013, the National Equities Exchange and Quotations (NEEQ), commonly called the New Third Board (NTB), was inaugurated and recognised as the third national equity trading venue after Shanghai and Shenzhen. During 2018 and 2019, a series of new mechanisms were proposed, including establishing the “Select” tier to include the most successful firms and making it possible for firms to transfer to another stock exchange for public listing. This culminated in the birth of the Beijing Stock Exchange on 3rd September.

...based on a 2018 survey, SMEs in China make up more than 90% of private enterprises, offer more than 80% of urban employment, generate more than 70% of technological innovation, account for more than 60% of Gross Domestic Product (GDP), and contribute more than 50% of the national tax income.

A push for innovation

From its listing requirements, one can tell that the Chinese government is aiming to boost the growth of SMEs, especially the technology-driven SMEs.

Nowadays, China needs to foster the growth of SMEs even more because of the following reasons. First, based on a 2018 survey, SMEs in China make up more than 90% of private enterprises, offer more than 80% of urban employment, generate more than 70% of technological innovation, account for more than 60% of Gross Domestic Product (GDP), and contribute more than 50% of the national tax income. Second, because of the China-US trade war, China feels the pressure to establish a complete production chain, which necessitates the growth of various SMEs. Third, the Chinese government wants to channel the significant savings and investments away from real estate. Providing a third exchange and thus a larger stock market will help in this effort.

Looking at the historical development of the new stock exchange, we can quickly notice Beijing's involvement in the new exchange and its parent, NTB. NTB originated from a trial implemented by Beijing, and the first group of companies listed there was from the Z-Park. In fact, the earliest name of NTB in Chinese contained the full name of the Z-Park.

Perhaps paradoxically, the government has tried to downplay Beijing’s role in the new exchange. After the NTB trial was extended to the whole country, some local media proposed to call it the Beijing Exchange. But Beijing chose not to do so. The primary consideration was that Beijing was already China's political and cultural centre; it wanted to avoid fighting with Shanghai, Shenzhen and Hong Kong for the position of the financial centre.

...in 2020, Beijing was the only northern city in the top ten cities in terms of GDP. Therefore, the Chinese central government feels the urge to boost the financial powers of the north by establishing the new Beijing Stock Exchange.

This consideration is becoming less relevant nowadays due to the rapidly widening economic gap between the north and the south regions. In the early 1990s, the north-south economic imbalance was not so significant. For example, the top ten Chinese cities with the highest GDP in 1991 comprised six cities in the south and four cities in the north. It was not such a big deal to have two stock exchanges located in the south during those years.

However, in recent years, the narrative of a "strong south, weak north" China has become commonplace. In fact, in 2020, Beijing was the only northern city in the top ten cities in terms of GDP. Therefore, the Chinese central government feels the urge to boost the financial powers of the north by establishing the new Beijing Stock Exchange. The government envisions that the new exchange will enhance the economic growth in the Jingjinji Metropolitan Region (Beijing-Tianjin-Hebei) and the entire northern region of China.

To sum up, the establishment of the Beijing Stock Exchange is a consistent move in the Chinese government's long-term plan to boost the growth and innovation of SMEs. At the same time, it serves as a crucial attempt to narrow the north-south economic imbalance in China.

Related: Why China is setting up the Beijing Stock Exchange | Ride-hailing giant Didi slapped with Chinese cybersecurity review days after IPO | HK Stock Exchange to benefit from returning US-listed Chinese firms | If not the US, can the Chinese government provide better IPO choices for internet companies? | China's growing north-south gap: Can the north catch up? | The Yangtze River Delta region: Promoting economic integration amid provincial competition