Amid claims of discrimination against Africans in Guangzhou in terms of coronavirus controls, the Guangzhou authorities have stressed that there is no differential treatment of foreigners. Meanwhile, Chinese in and out of China are worried about a second wave of the virus, and retaliation by locals in other countries. Zaobao correspondent Edwin Ong reports. 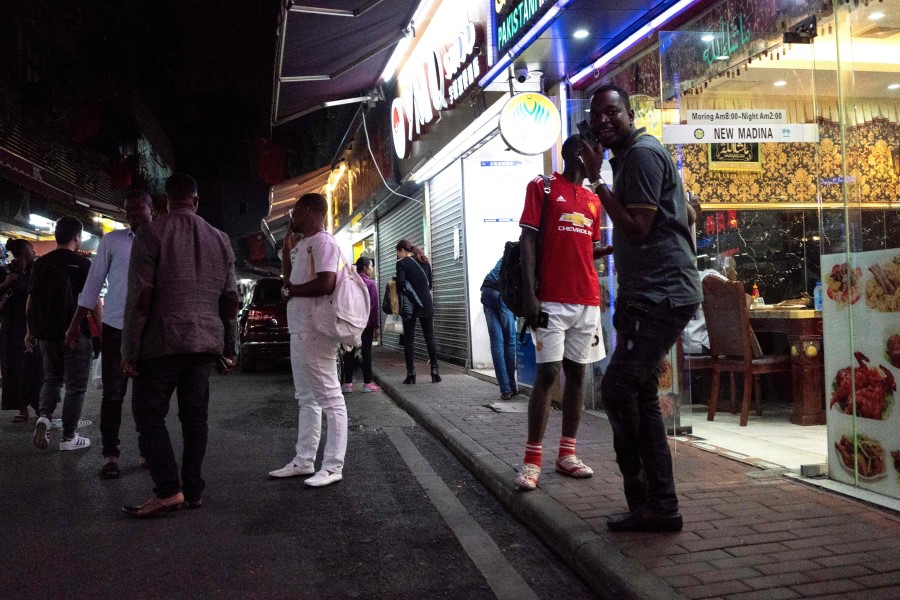 This file photo taken on March 2, 2018 shows people gathering on a street in the "Little Africa" district in Guangzhou, the capital of southern China's Guangdong province. Africans in southern China's largest city say they have become targets of suspicion and subjected to forced evictions, arbitrary quarantines and mass coronavirus testing. (Fred Dufour/AFP)

Candice Chan - 28 November 2022
Often referred to as the world’s economic “canary in the coal mine”, South Korea has seen its economy tumble over the past year, impacted by external factors such as US interest rate hikes and signs of recession in key trade partners. The accumulation of domestic factors — currency crisis, tumbling stock market and rising inflation — is also hitting the South Korean economy hard. However, this industrial powerhouse has the domestic means to climb out of the doldrums.
Read more
Translated by Candice Chan on 13 April 2020

With imported coronavirus cases rising in China, Guangzhou’s increased checks on foreigners have sparked concern amongst several African governments, rocking the stable relations between China and Africa. Guangzhou authorities yesterday insisted that there is no differential treatment of Chinese citizens and foreigners when it comes to coronavirus controls.

The authorities have since stepped up controls on Africans in Guangzhou, inadvertently triggering a diplomatic storm. Hong Kong’s Sing Tao Daily yesterday reported that three Nigerian men staying in a rented apartment in Guangzhou’s Sanyuanli district were forcibly put under mandatory quarantine after an inspection by law enforcement officials. Their passports were also confiscated.

Africans in Guangzhou say that they are now targets of suspicion, and have been subjected to forced evictions, arbitrary quarantines, and mass coronavirus testing.

The incident has sparked diplomatic friction, with Nigerian Foreign Minister Geoffrey Onyeama and Speaker of the House of Representatives Femi Gbajabiamila meeting Chinese ambassador to Nigeria Zhou Pingjian on Friday and Saturday to express concern, and to ask the Chinese government to step in.

According to official figures as of last Friday, there are 30,768 foreigners living in Guangzhou, including 4,553 Africans.

Amid mainland China’s efforts to prevent imported coronavirus cases, Africans in Guangzhou say that they are now targets of suspicion, and have been subjected to forced evictions, arbitrary quarantines, and mass coronavirus testing. Tony Mathias, a 24-year-old exchange student from Uganda, was forced to leave his apartment last Monday. AFP quoted him as saying, “I've been sleeping under the bridge for four days with no food to eat... I cannot buy food anywhere, no shops or restaurants will serve me… We're like beggars on the street.”

Mathias added that police had given him no information about testing or quarantine but instead told him "to go to another city". According to official figures as of last Friday, there are 30,768 foreigners living in Guangzhou, including 4,553 Africans.

“The plight of Africans in Guangzhou is just a small trigger.” - Associate Professor Li Mingjiang

On recent discrimination against Africans in Guangdong and other places, Chinese foreign ministry spokesperson Zhao Lijian last Thursday admitted to misunderstandings in the process, and urged the relevant authorities to improve their work procedures. Zhao emphasised the “brotherhood in times of adversity” between China and Africa, and professed that China and African countries are united more than ever.

On allegations of differential treatment for foreigners, Guangzhou Municipal Public Security Bureau spokesperson Cai Wei told a news conference yesterday that the anti-virus curbs apply to all Chinese citizens and foreigners, with no discrimination in enforcement.

Chinese in Africa worried about sinophobia

Associate Professor Li Mingjiang of the S. Rajaratnam School of International Studies at Nanyang Technological University says that escalating the incident to government levels, has clearly had a negative impact on China’s previously stable relations with African countries. He predicts that as the coronavirus situation in Africa deteriorates, there may be more criticisms of China’s policy lapses resulting in the global pandemic, which would be a further hit to bilateral relations.

Prof Li notes that some African countries in recent years have started to become suspicious and unhappy about China’s commercial investments in Africa. “The plight of Africans in Guangzhou is just a small trigger.”

He expects China’s foreign ministry to clarify and resolve the issue with the leaders of African countries, media, and opinion leaders. China's central government agencies may also get Guangzhou to better manage problems involving the African community, including the issue of people not abiding by the law, and engaging in illegal activities. Left unresolved, these issues will continue to get in the way of China’s relations with African countries, even after the pandemic ends.

Meanwhile, Nie Shaorui, a Chinese living in Africa, yesterday wrote an article warning that China’s rough treatment of citizens of other countries might end up having spillover effects, and Chinese outside China can become victims. He predicted an imminent wave of rejection of China’s people, technology, and products in Africa.

The World Health Organisation (WHO) has warned that although the number of coronavirus cases in Africa are far lower than in Europe and the US, over the past few days, cases in Africa have doubled, and if the trend continues, Africa will quickly see a massive outbreak.

WHO Director-General Tedros Adhanom Ghebreyesus said the coronavirus is spreading in rural areas in Africa, with community spread seen in over 16 African countries. The WHO's Africa head, Dr Matshidiso Moeti, agreed and said areas outside of Africa’s major cities are starting a new front in the coronavirus fight.

Africa currently has over 13,600 confirmed cases, with at least 740 dead. However, experts say that true figures may be much higher, due to the lack of widespread and accurate testing. The WHO has repeatedly warned that Africa’s adequate health infrastructure, especially in the rural areas, will buckle under the pressure of a sudden surge in cases. It has asked African countries to strengthen their emergency capacities and requested the G20 countries to increase coronavirus-related support for Africa.

Related: Where multiple 'gods' co-exist: Countering the racism complex in Western diplomacy | [Photo story] When Chinese are not welcome