Japanese academic Kai Kajitani says that given China's past efforts to clamp down on individuals and entities that "stick out too much", its current clampdown on internet platform companies is not surprising. Such moves are also expected as the Chinese government seeks to win popular support and stabilise society ahead of the 20th Party Congress in 2022. 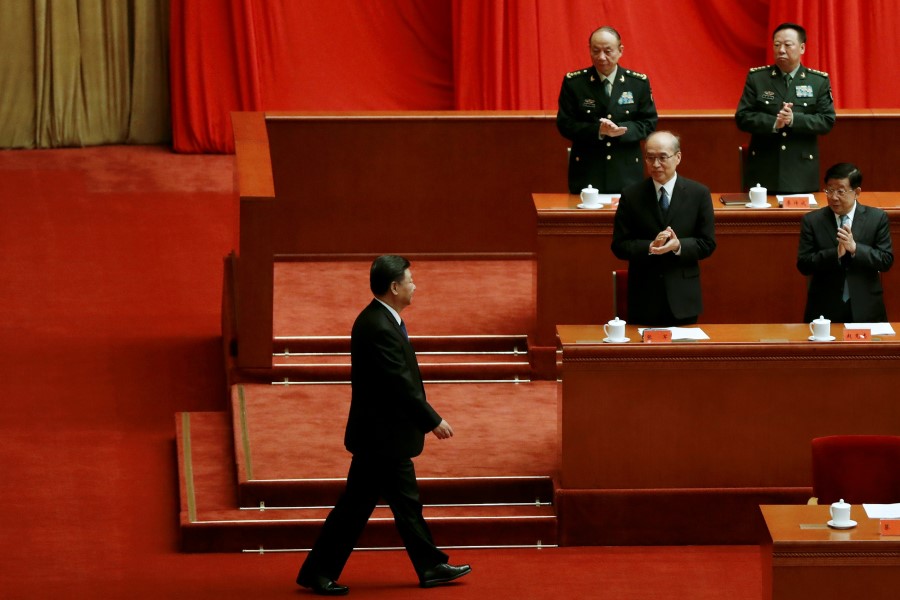 Chinese President Xi Jinping arrives for a meeting commemorating the 110th anniversary of Xinhai Revolution at the Great Hall of the People in Beijing, China, 9 October 2021. (Carlos Garcia Rawlins/Reuters)

Candice Chan - 30 January 2023
A mall in Shenzhen came under fire for putting up white lanterns with black text as part of its Chinese New Year decorations, while an “ugly” rabbit-shaped light decoration was removed from another mall in Chongqing. Academic Zhang Tiankan muses on tradition and innovation, and the evolution of traditional decorations.
Read more
Translated by Candice Chan on 11 October 2021

The Chinese government has tightened its grip on Alibaba, Tencent and other platform companies in a series of incidents dating back to the end of 2020.

As of the time of writing in September 2021, the pressure on these platform companies has gone beyond the framework for enforcing China’s Anti-Monopoly Law and is now applied in the name of common prosperity, which is the government’s redistribution policy.

To avoid criticism, Alibaba and Tencent have promised to contribute funding of 100 billion yen (about US$15.5 billion) by 2025 to implement the common prosperity policy. This is in response to a meeting of the Chinese Communist Party (CCP) Central Financial and Economic Affairs Commission convened in August, which emphasised a “third distribution” to bring about income redistribution through “voluntary donations” by private enterprises.

Abrupt policy changes not a return to the Cultural Revolution

This series of clampdowns, especially the common prosperity policy as of the start of 2021, is fairly sudden and seems to be out of balance.

For example, the long-term goals leading up to 2035 in the 14th Five-Year Plan, which was presented at the National People’s Congress (NPC) in March 2021, employed the term common prosperity in the context of people-centred development, but there is also a clear priority on the conventional long-term goals of promoting innovation and digital society to build "Digital China". At this stage, no one would have imagined squeezing a major IT company for huge amounts of funding, or clamping down on an educational IT company in the name of equal access to education.

The Xi leadership has neither disavowed capitalist means of production, nor made any changes to China's fundamental economic management.

The series of policy changes have been excessively abrupt, giving the impression that the decisions have been made by the authority of President Xi Jinping, and led some people to see it as a return to the Cultural Revolution. However, this viewpoint is clearly erroneous.

Apart from ensuring public ownership of the means of production based on socialist transformation, the Cultural Revolution evolved into a cultural and political conflict under the guise of further enforcing socialism. The Xi leadership has neither disavowed capitalist means of production, nor made any changes to China's fundamental economic management.

As beneficiaries of the government’s protectionist policies, platform companies could easily grow into companies with economies of scale and organically form monopolies making use of data resources; however, it would still be difficult to develop domestic corporations in the absence of industrial policies that targets specific industries.

Hammering down the nail that sticks out too much

In China, private enterprises, led by these platform companies, can lay their hands on various kinds of big data as they ink business contracts with the government. This not only improves the authority's administrative ability to develop surveillance technology but also their ruling power, creating a "mutually dependent" relationship between the government and the private sector.

However, the IT industry, especially the platform companies operating on economies of scale would grow much too large if left unchecked. Their presence and their impact on society and the economy has become so large that they are "sticking out too much", leading to their clampdowns.

On the point of hammering down the nail that sticks out too much, we should recall the experience of the so-called Chongqing model and the political movement of Bo Xilai, the former Chongqing City party chief who fell from grace in 2012.

When Bo Xilai was appointed party secretary of Chongqing in November 2007, he achieved high economic growth by attracting foreign corporations. He also put forth the Chongqing model, a striking social policy that emphasised public welfare including finding solutions to the housing problems for landless farmers and building affordable housing. The "Sing Red" and "Strike Black" campaigns were typical of his term in office. Emulating the Mao Zedong era, he encouraged people to sing revolutionary songs (Sing Red), and he was applauded by the general public for confiscating the assets of private-sector entrepreneurs without legal due process under the guise of purging a mafia of corrupt politicians and associated entrepreneurs (Strike Black).

We should also recall another successful experience of an anti-corruption campaign.

At the second plenary meeting of the 18th Central Commission for Discipline Inspection in 2012, President Xi announced a large-scale anti-corruption campaign that would strike both tigers (senior leaders) and flies (lower and middle-ranking bureaucrats). As a result, approximately two million party officials across the country were targeted for punishment. These officials included former Politburo Standing Committee member Zhou Yongkang and other big tigers (high-ranking party officials at provincial and ministerial level).

An academic paper examining which government executives were charged during this campaign found that executives who had achieved high economic performance during their terms in office were more likely to be targeted. In short, the “winners” who had been promoted and appreciated for their economic policy skills and had amassed wealth until the era of the Hu Jintao administration were charged. This method of moderating the resentment of the general public by meting out punishment to the officials who stuck out (= the winners) is apparently similar to last year’s phenomenon of meting out punishment to the major IT companies that stuck out.

By nature, the CCP has a tendency towards populism and to be concerned with public opinion. In addition, the Xi leadership understands that resentment among the general public has been building with the loss of urban employment opportunities focused on the service industry due to the Covid-19 pandemic even as the gap between the rich and the poor is widening. The administrative agencies are probably mindful of public opinion and are trying to win the favour of the people by striking down the major corporations before the CCP's 20th Party Congress in the autumn of 2022.

Even though the current series of clampdowns will exert downward pressure on the Chinese economy, we can probably assume that the government authorities will use some kind of leverage to avoid a major slowdown in the economy. It is also important for foreign corporations to bear in mind that overreacting to the risks in China, including economic security, represents the reverse risk of throwing away business opportunities.

Related: Blindspots in the financial regulation of China’s tech ‘platform companies’ | Why platform companies seek monopoly and what happens when governments rein them in | Chinese academic: Developing nations must be wary of internet platform companies and their capital | How internet giants' monopolistic practices hurt SMEs in China | Why China needs to set its own house in order with a regulatory spurt