China’s gaokao began yesterday, with millions of students taking this national university entrance exam (gaokao). One phenomenon that got Zaobao correspondent Yang Danxu curious was students wearing purple underwear to the exams. She examines this and other superstitions that give students a mental boost in the exam, and says that the gaokao needs to remain fair. 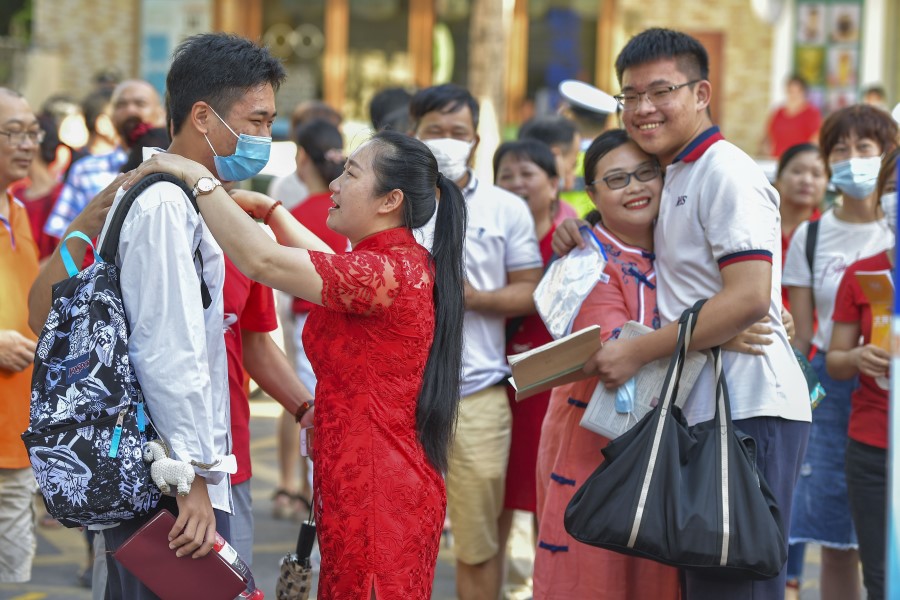 Candice Chan - 10 August 2022
Li Cheng, director of the John L. Thornton China Center of the Brookings Institution, notes that China’s emergence as an economic powerhouse has been accompanied by the rise to prominence of seasoned financial technocrats or self-taught experts. While these "new kids on the block" will most likely enter the new CCP Central Committee this fall for the first time, time will tell how they will respond to the many daunting economic and financial challenges at both the provincial and national levels.
Read more
Translated by Candice Chan on 8 July 2020

After a postponement due to the coronavirus, some 10.7 million students filled exam halls to take China’s National College Entrance Examination (NCEE), known as gaokao, yesterday. The night before, a friend shared this news item: “Purple underwear are all sold out on online platforms because of the gaokao!”

The gaokao and purple underwear seem totally unrelated — what have they to do with each other? Out of curiosity, I did an internet search and found that since last year, it was a trend to wear purple underwear to the gaokao, especially among students in northeast China.

Online explanations have it that in China’s northeast dialect, one’s bottom is referred to as ding (腚), and wearing purple underwear sounds like zhiding nengxing (紫腚能行/指定能行), meaning guaranteed success — in this case, for the gaokao.

Others suggest kissing (吻, wen) the paper (which sounds like “稳过/wen guo, sure pass”), then putting it under their bottom (腚, ding) and sitting on it, for a “guaranteed pass” (一定过, yiding guo).

And just like that, purple underwear became linked to the gaokao. We have no idea if it was some brilliant marketing tactic conjured by underwear companies, but students and parents are happy to buy into it.

A search for “gaokao underwear” on Taobao turns up many buyers and sellers, and the sales figures look good. Some vendors even print red ticks on the purple underwear, to symbolise answering everything correctly, while others print “lucky” slogans and wishes for the wearer to be among the top candidates, and to know the answers to all the questions.

Some netizens remind students not to walk to the exam halls if they are wearing purple underwear, because that sounds like zhiding buxing (紫腚步行/不行, the pronunciation of buxing can mean “walk” or “fail” ), meaning they are destined to fail, which would negate their “magic weapon”. Others suggest kissing (吻, wen) the paper (which sounds like “稳过/wen guo, sure pass”), then putting it under their bottom (腚, ding) and sitting on it, for a “guaranteed pass” (一定过, yiding guo).

Besides purple underwear, apparently some students wear Nike T-shirts and sneakers, because the brand logo is a big “tick”. Colours are also a thing: red for the first day to symbolise “a lucky start”, green for the second day to symbolise “green lights/smooth running all the way”, and grey (灰, hui) and yellow (黄, huang) for the third day, to symbolise “moving towards glory/辉煌, hui huang”).

With students’ nerves on edge, parents and teachers also have to take care with what they wear. Over the past few years, China media have reported mothers and female teachers in qipaos (traditional Chinese dresses) outside exam halls across the country, symbolising qikai desheng (旗开得胜, a quick victory). A couple of days ago, a male teacher in Dandong, Liaoning, went all out so his students would get good results — he wore a red qipao to class, to wish his students all the best for the exams.

Dressing for the gaokao involves as much philosophy as the rituals of religion. Before the gaokao, students have to eat “lucky” food, such as glutinous rice dumplings (zongzi, 粽子), Top Scholar Cake (zhuangyuan gao, 状元糕), and trotters (tibang, 蹄膀), because they sound like or come from the Chinese phrases for “guaranteed pass” (baozhong, 包中), “top scholar” (zhuangyuan, 状元), and “be among those who pass exams” (jinbang timing, 金榜题名).

Maotanchang Middle School of Lu'an, Anhui, is known as the “gaokao factory”, where every year crowds of people send students off to take the gaokao. This year, there was no such mass gathering due to the coronavirus, but it was reported that when the school sent its students for the gaokao on 5 July, it arranged the first bus to leave at 8:08am (eight is considered a lucky number). Not only that, but the driver and the students on board were either surnamed Ma (horse) or born in the year of the Horse, to symbolise yima dangxian (一马当先, taking the lead), and madao chenggong (马到成功, to succeed).

This year’s gaokao is unusual. The coronavirus has disrupted the revision plans of many students, while preventive measures have become an indispensable part of the gaokao. There were also frequent media reports about cheating, stories of people assuming others’ identities to take exams and to enter university, and these have led many to question the fairness of the gaokao.

The education ministry and public security ministry also announced the arrests of over 200 offenders involved in exam cheating as a strong deterrent.

The controversy in China over the fairness of the gaokao has been long ongoing. There are still questionable issues after more than 40 years of its resumption since the cultural revolution ended. Gaokao-related debates readily resonate with people, and touch a nerve in society. It shows that the Chinese people continue to pin great hopes on the gaokao as a means of changing their fate, and see it as a relatively fair system for tackling issues of social mobility and distribution of resources. They want to keep the gaokao system.

To clamp down on cheating, the Chinese authorities have implemented several measures. These include expediting investigations into the recent gaokao cheating cases and having high-profile media reports on the punishments and penalties. The education ministry and public security ministry also announced the arrests of over 200 offenders involved in exam cheating as a strong deterrent. The ministries have also repeatedly stated their intention for a fair gaokao, by requiring constant vigilance during the setting, printing, and transportation of the exam papers, as well as during the invigilation of the exam. Recruitment by tertiary institutions has to be strictly regulated.

... with millions of people cracking their heads for ways to get good results, it shows that at least for now, Chinese people still believe the gaokao can change their fates.

Even with so many precautions, the fairness of the gaokao may just be relative. Given the unequal distribution in population and resources of tertiary institutions, students from different provinces and cities have very different acceptance rates and chances of getting into a well-known school. Vacancies at popular primary schools in China are tied to residential zones, extracurricular lessons have become a necessary “shadow education”, and “gaokao migration” (so that one lives in an advantageous zone) is common; all these phenomena have added to the difficulty of keeping education fair, and it may get increasingly harder for someone from a poor family to do well in the gaokao.

To get past the gaokao, people have come up with all sorts of ideas and methods for good luck. These may seem ridiculous and largely superstitious. But from the perspective of psychology, the students — especially parents and teachers — just need a positive sign to calm their nerves through little rituals, which is all well-intentioned. And with millions of people cracking their heads for ways to get good results, it shows that at least for now, Chinese people still believe the gaokao can change their fates.

So before China finds a way to make education fairer and to widen the avenues of social mobility, the least that one can do is to make sure that the fairness of the gaokao is not further eroded and that people continue to trust this system of talent selection.

Related: China's university admissions conundrum: Who should have priority? | Study in the US? Chinese students are having second thoughts | 'Mother hens' in China: A phenomenon of East Asian attitudes to education?