As far as a passion for tea goes, cultural historian Cheng Pei-kai meets his match in a tea shop owner in Sham Tseng. The tea connoisseur is an alchemist almost as he varies the ingredients and brewing methods to concoct the most memorable teas. Grace Chong - 21 June 2022
Over the past several years, Chinese private firms have ferociously invested in India’s tech start-ups. Initially welcomed, China’s diversion of interest from erstwhile US investment has been viewed with some measure of suspicion since the Galwan Valley conflict. Are we living in a world where investment patterns are determined by statecraft? ISAS academic Karthik Nachiappan examines the issue.
Read more
Translated by Grace Chong on 22 June 2022

After a feast of roast goose at a restaurant in the coastal area of Sham Tseng in Hong Kong, I left with greasy lips and a likely spike in body fat. But my friends did not feel guilty at all and even said, “We haven’t been here for almost a year. Having a slice or two of greasy, tender roast goose to nourish the body is totally fine.”

I told my friends that I had a standing invitation to visit a nearby tea shop. The owner was an interesting chap, a tea connoisseur who had visited me at the university just to share his knowledge about tea drinking in the Tang and Song dynasties. Since we were at Sham Tseng, I suggested that we give it a go. My friends were nonchalant about it but agreed to take a gander.

We stood in the middle of the road searching for the store. We looked left and right, pointing here and there. The group of us must have seemed rather arrogant as if the vehicles that zoomed past were not the kings of the road but frogs and grasshoppers escaping from intruders in a field.

I sometimes think that the haphazard way we city folk visit villages is just like Granny Liu (a character in Dream of the Red Chamber) visiting the Grand View Gardens (大观园) for the first time. Everything is new and strange in those first encounters.

A little while later, down a back road hidden behind a car repair shop, we found the tea shop just a few more steps behind some foliage. It looked like a provision shop lined with rows of bottles and cans. It sold candied fruits, chocolates, walnut candies, peanut cookies, sesame cookies, cashew nuts, roasted plant seeds and every kind of snack, which made it seem like a confectionery shop as well.

I walked into the store with eight or nine of my friends. Happy that I was there to visit him, the store owner was all smiles and motioned for us to sit down and have a cup of tea. When my friends asked how long we would stay, I replied that the store owner was a perfectionist determined to revive the glory of tea culture in the Tang and Song dynasties, so one or two hours would be a safe bet. Three or four of my friends quickly said that they were just there for a quick browse. They muttered that they had some other plans for the day and quickly scooted off.

Five of us stayed behind. The tea connoisseur didn’t skip a beat and even quoted from the classics — Chinese tea master Lu Yu’s The Classic of Tea (《茶经》) — saying that three people drinking tea was optimal but five was satisfactory too.

He asked us to have a seat and started laying out his teaware. Most of the items were heavy-duty apparatus such as stainless steel small- and medium-sized pots, a hard-paste porcelain bowl, an iron basin for boiling water, a stove and a kettle. None were intricate enough for the contemporary petty bourgeoisie. If Buddhist nun Miaoyu (a character in Dream of the Red Chamber) saw the teaware, I’m sure she would either have stormed off right there or smashed every one of them lest they hurt her bright, elegant eyes.

After preparing everything, he excitedly told us that we would be trying three types of tea that he had concocted himself. The first was a tea brewed in the methods of Lu Yu, by first roasting the Phoenix Dancong (凤凰单丛) tea leaves, then grinding them into a fine powder before brewing the tea, so as to lock in the true taste and aroma of the tea. Once ready, he served the yellowish-brown-hued tea.

We took a few sips and found that it was slightly astringent and left a lingering fragrance in the mouth. He stared intensely at us as we took each sip, enthusiastically asking about the taste and if we detected any fruitiness.

Ah Qi pressed his lips together and said rather doubtfully, “I think I tasted some hints of lychee?” The tea connoisseur leapt for joy and pumped his fists in the air, as if Sir Laurence Olivier was performing a Shakespearean play on stage. “Yes,” he exclaimed, “You’ll taste a subtle hint of orchid later too.”

The second tea was a freshly ground Fresh Fragrance Anxi Oolong tea (安溪清香乌龙), apparently brewed with a mix of brewing methods from the Tang and Northern Song dynasties, and incorporating some Western methods to make a cup of unique Hong Kong milk tea.

While the steps were complex and the choice of milk was carefully selected, what I found most interesting was that he beat the milk tea with a bamboo whisk to make the foam. He moved skilfully, chanting as he went along, as if performing a Taoist ritual.

My friends were all puzzled but I could clearly hear him reciting Emperor Huizong of Song’s Treatise on Tea (《大观茶论》): “Masters will first add the tea powder into an appropriate amount of water and stir until the solution reaches a certain viscosity, akin to paste. Then, they will gently pour hot water around the rim of the bowl so slowly that the tea is barely disturbed. The whisking then begins gently. The master’s wrist will rotate in circular movements. The circles will then ellipse into larger orbits as he adds more hot water to the tea. After that, the velocity gains momentum. The fingers hold the heavy whisk loosely yet firmly so that the wrist can swing, spin and twirl in full freedom and grace. The master whisks the tea to its final state, not unlike the proper kneading of dough. Before you realise it has happened, foam will arise like bright and twinkling stars shining in glory around the moon.”

The aroma of the tea stays in the back of the throat, lingering like a fuzzy feeling after a drunken high, and tastes much better than Maotai. Who cares if it is HK$68 or HK$680 a cup.

Ah, he was following Emperor Huizong of Song’s instructions while adding his own modern twist. How did it taste? Absolutely heavenly. Not a single pinch of sugar was added, but it was extraordinarily sweet and fragrant, and left me wanting more.

The tea connoisseur told us that his milk tea is probably the most expensive one in Hong Kong at HK$68 a cup, but it is well worth every penny. We savoured the fragrant milk tea and soaked in its lingering scent. The aroma of the tea stays in the back of the throat, lingering like a fuzzy feeling after a drunken high, and tastes much better than Maotai. Who cares if it is HK$68 or HK$680 a cup.

The third type of tea was a little strange. It was made by adding five or six drops of Guangdong triple-steamed rice wine into the Phoenix Dancong tea that we had tried earlier. But it was unexpectedly refreshing and washed away the aftertaste of the milk tea. Our taste buds picked up the initial astringency of the tea again, and lo and behold, we tasted a slight hint of orchid!

Before we left, I insisted on paying for the tea to thank him for the hospitality he extended to me and my friends. He firmly declined, saying that my books on tea have been a source of inspiration for his experiments with tea drinking. He insisted that I was his teacher and that I was welcome to visit and teach him again any time. I politely accepted and called him the “tea connoisseur of Sham Tseng”.

Related: How to drink tea like an ancient Chinese | Exploring Dehua porcelain and Anxi tea with a Dutchman | Popular in the Ming and Qing dynasties, will Songluo tea make a comeback? | Pu-erh: The raw, the ripe and the Qing dynasty 'tribute tea' from Yunnan | My longing for the elusive fish of spring 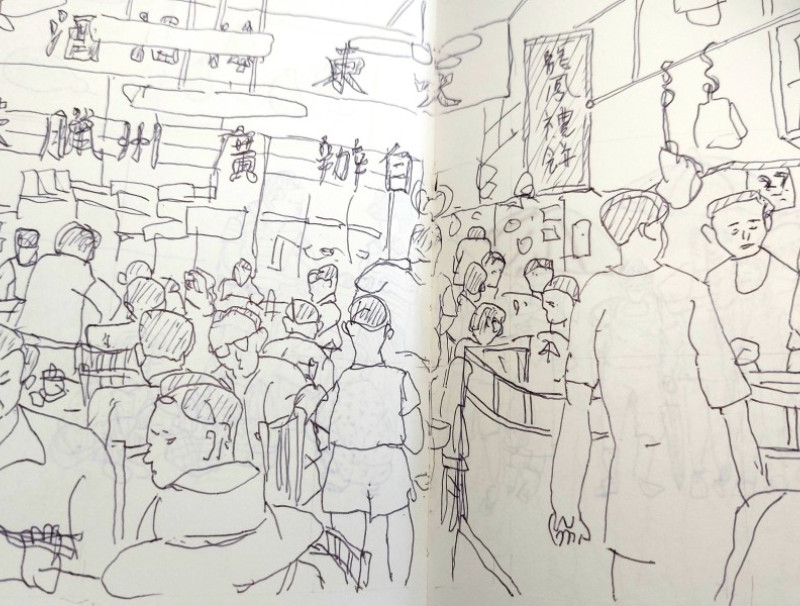