Another internet furore has erupted, this time over a Shanghai college lecturer who was ratted out by her student and accused of being “spiritually Japanese” for questioning the death toll of the Nanjing Massacre. Are fears of a Cultural Revolution returning justified as people feel emboldened to tell on others without much thought? 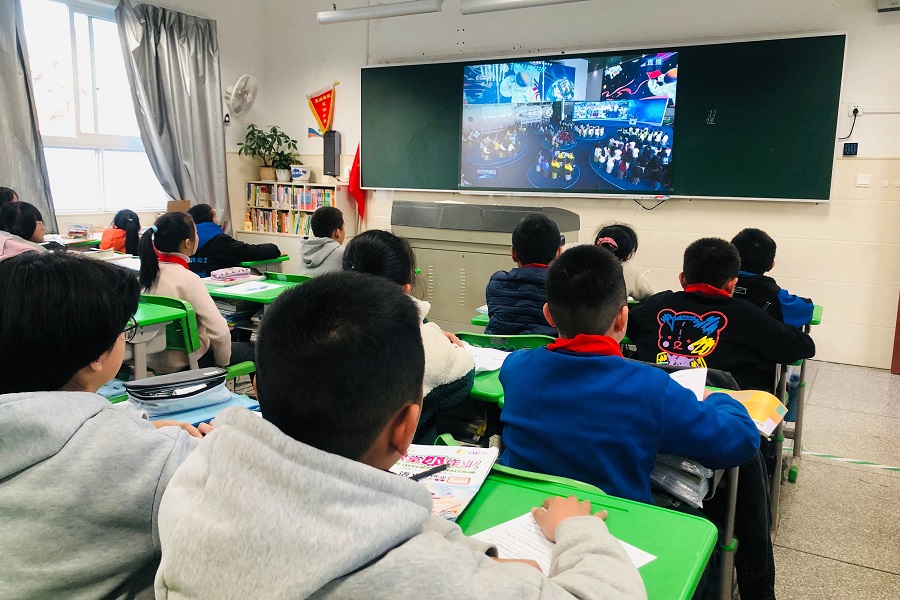 Grace Chong - 12 January 2022
The global chip shortage throughout 2021 prompted many tech companies to rely more on themselves. Coupled with the rise of artificial intelligence, demand for high-capacity chips has increased with tech companies and device makers racing to deliver smarter services and products. But the global semiconductor industry is also getting increasingly crowded, as more and more newcomers seek to gain a foothold in advanced chips to power new technologies.
Read more
Translated by Grace Chong on 21 December 2021

The case of a Shanghai vocational college teacher who was reported by her students for questioning the Nanjing Massacre’s death toll has reignited the debate on the resurgence of the Cultural Revolution. Hu Xijin, former editor of Chinese state media Global Times, said on 17 December that the reports and related review should be resolved internally, and not be escalated to the public opinion battleground.

The video capturing the teacher in class was uploaded by a student on 14 December, drawing public ire on the internet. Chinese state media such as the People’s Daily and the China Central Television condemned the lecturer on 16 December for questioning the truth of history, and even went as far as to say that she did not deserve to be a teacher or educate the younger generation as she lacked both knowledge and morals.

That same night, Shanghai Aurora College announced that the teacher was sacked, but this did not quell the groundswell of public opinion which had coalesced into two opposing camps. On 16 December, some we-media attempted to defend the teacher based on the content presented in the full video, while some others condemned the student’s malicious act of reporting the teacher as a reemergence of Cultural Revolution snitching trends. As of now, all these articles have been removed.

Some netizens also obtained the contact details of the student involved and sent haranguing messages, even sending “regards to the student’s whole family”. The student’s supporters on the other hand took to the internet attacking the teacher’s supporters as being “spiritually Japanese” and “standing in opposition to the country’s patriotic comrades”.

Professor Li Jian of Hunan City University’s School of Marxism was transferred to the university’s library after a student told on him for saying that the Japanese are always striving for excellence (日本人精益求精).

Teachers’ resentment could be generalised on public opinion battleground

As public opinion snowballed and unfurled, Hu wrote on Weibo on 17 December that the phenomenon of students reporting teachers was indeed a highly controversial and sensitive topic.

Hu added that not too long ago, some teachers promoted Western values in the classroom and misled students. This was very harmful and could not be condoned. But recently, some teachers hoped that school regulations could be less stringent and said that they actually resented being reported against. Such resentment was real and could easily be magnified in the public opinion battleground.

It is not uncommon for Chinese college teachers to be criticised, warned or even expelled as a result of students’ reports. At least five such instances have been in the public domain over the past three years. The most recent case happened in November: Professor Li Jian of Hunan City University’s School of Marxism was transferred to the university’s library after a student told on him for saying that the Japanese are always striving for excellence (日本人精益求精).

Hu felt that the college ought to have the courage to handle each report fairly in accordance with regulations and laws, and safeguard the academic space that must be protected, whilst correcting misleading teachings and erroneous values of individual teachers.

Public opinion loves black and white answers and the imposition of “capital punishment” — the subject of the dispute has to be either the perpetrator or the hero. - Hu Xijin

He said the teacher in question did not discuss the background of the controversy over the number of casualties in the Nanjing Massacre — that is, Japan wants to deny the Nanjing Massacre — which led the student to question if the teacher was “spiritually Japanese”. Hu added that the college’s decision to sack the teacher shows that they recognise the severity of the incident. Those who find this outcome unacceptable should question the college’s decision instead, Hu added.

Hu thought that once the report and the subsequent handling of the situation entered the public opinion arena, confrontations would easily occur. Public opinion loves black and white answers and the imposition of “capital punishment” — the subject of the dispute has to be either the perpetrator or the hero. This is a result of values being torn apart and colliding with one another. However, society must not evaluate every situation with the toughest barometer whenever an issue crops up and expect people to choose sides before speaking up. Hu said that this was not good for both social cohesion and the maintenance of society’s internal vitality.

Hu also stressed that society needed to get used to discord. “A cacophony of noise is better than everyone in unison,” he said. However, this discord should not attack red lines, and should not be the sole determining factor in passing public judgement, or a driver of illegal and immoral doxxing.

If teachers only taught according to a script, “the real damage was not to the teachers or the schools, but to the next generation, as they might become more simple in their thinking.” - Tan Gangqiang, head of a psychology consultation centre in Chongqing

Tan Gangqiang, head of a psychology consultation centre in Chongqing (重庆市协和心理顾问事务所), said the strong backlash to this incident is partly because some people, especially the educated, have a fear that the “whistleblowing of the Cultural Revolution will come back”, and if such behaviour is widely encouraged, then “anyone might become that teacher”.

Tan felt that the purpose of higher education lay in pushing students to be innovative and critical thinkers, and this incident was a warning to education departments that a suitable environment and space must be given to higher institutions. He said there should be room to discuss sensitive topics in schools, so that the teachers would not fear exploring issues. If teachers only taught according to a script, “the real damage was not to the teachers or the schools, but to the next generation, as they might become more simple in their thinking.”

Controversial video said to be maliciously edited by a student

There are two versions of the video where the teacher in Shanghai questioned the death toll of the Nanjing Massacre. The earlier version — about one minute long — has been said to be maliciously edited by a student, while the full five and a half minute version has been circulating since 16 December.

The edited version that appeared on 14 December put together three controversial views by the female teacher, which could be easily interpreted as denying the Nanjing Massacre.

She said: “How many people did the invading Japanese army kill? There is no statistical support for ‘300,000 people’.”

She also said: “Who died, who had names? If you have no names or identification numbers, your 300,000 is just a figure in a Chinese historical novel.”

In the complete video, the student filming it can be heard snickering and smugly muttering: “I’ll post this on Weibo and report her.”

At the end, she reminded students: “You shouldn’t hate forever, but look at this chapter in history and think about how war comes about. That is the important thing.”

The complete version of the video restores the teacher’s narrative, where her first line is: “The Japanese army did carry out crimes against humanity.” This does not appear in the initial clip circulated by the students.

As for the number of deaths, the teacher said, “The worst thing is, the Kuomintang (KMT) government did not record the names of all those who died while their family was still alive,” leading to many versions of statistics.

She cited the massacre of the Jews by the Nazis, saying that all the Jews who died had their names recorded, which made it possible to tally the number of those who were killed, to illustrate the importance of academic rigour.

In the complete video, the student filming it can be heard snickering and smugly muttering: “I’ll post this on Weibo and report her.” When the teacher started on “how war comes about”, the student quietly repeated the line, chuckled and said: “Sure, sure, sure.”

Related: 1949: A time for change - A pictorial journey with Hsu Chung-mao | Tan Kah Kee, Aw Boon Haw and the Second Sino-Japanese War [Photo story] | When doing business in China, beware of patriotic netizens | Can the Chinese criticise their patriotic movies? | Does China need its own Squid Game? | A new Cultural Revolution? Why some Chinese are shocked by the CCP's relentless pursuit of 'common prosperity'