The Taiwan Strait: Hit the brakes now before it is too late

Not even the shared threat of Wuhan coronavirus can bring Taiwan and mainland China closer together. Zhu Zhiqun says recent developments do not bode well for cross-strait relations in the years ahead. 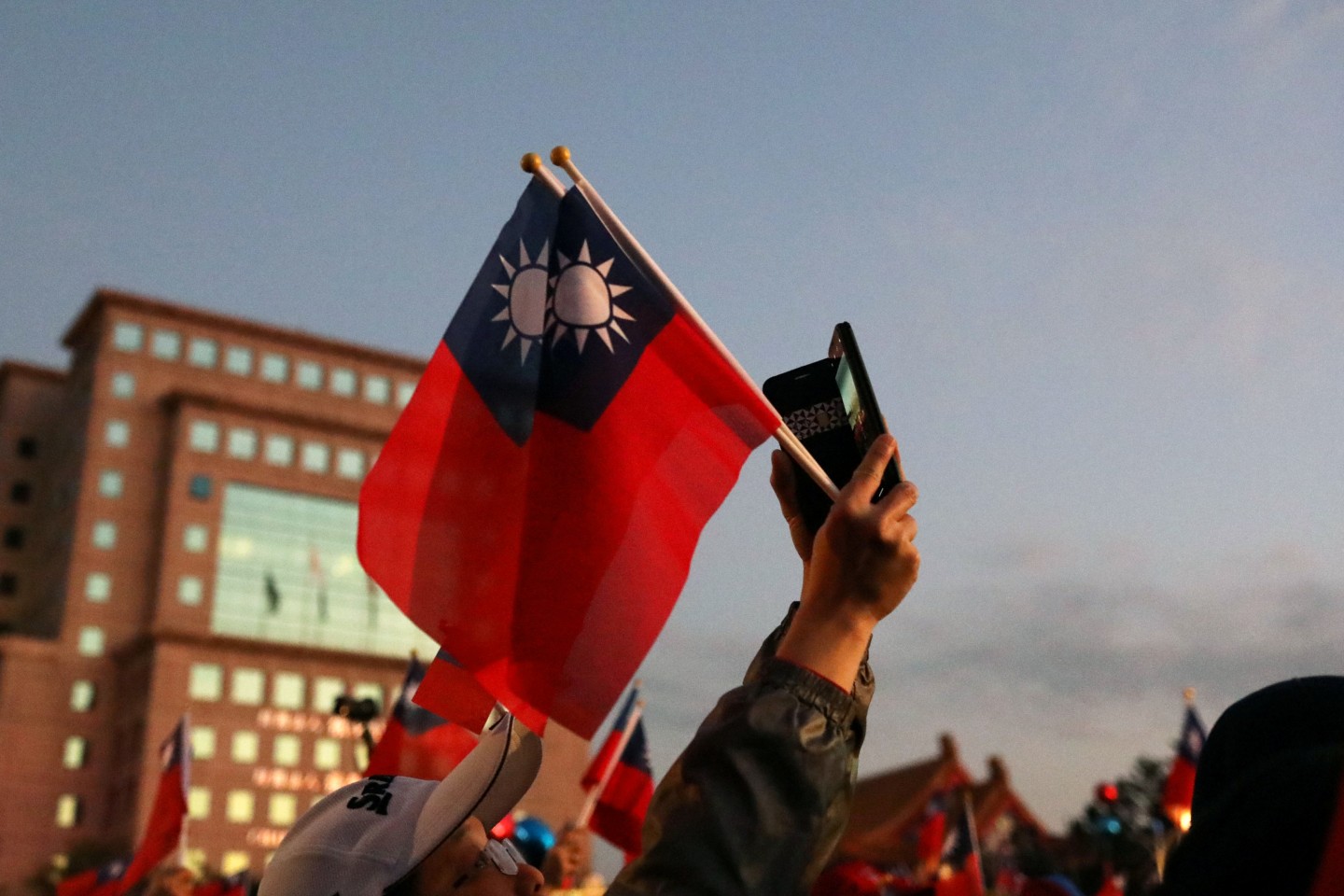 Are cross-strait relations proving to be too huge a gap to bridge? (Ann Wang/Reuters)

Grace Chong - 2 December 2021
Perhaps the theory of the survival of the fittest can help to explain the opposite gender imbalance in rural-urban China. Aspirant males and females head to cities in search of better prospects; the latter, with the added aim of better marriage prospects, invariably outnumber the men. Of the males that stay or return, there is the heavy bride price to pay to win the hand of a lady among the smaller pool of women left in the rural areas. This modern malaise is something no provincial policy can easily solve, says economist Li Jingkui.
Read more

Grace Chong - 2 December 2021
Reviews have been mixed after Shibati, Chongqing’s oldest central business district, reopened to great fanfare recently. Some were glad that the former messy, dilapidated quarter has been refreshed, while others feel that it has been turned into another “ancient street”, devoid of a sense of its rich history and heritage. Where should the fine balance be, in the preservation of tangible heritage, when multiple stakeholders and business interests are involved?
Read more

Grace Chong - 1 December 2021
By certain indices, China seems to have surpassed the US in artificial intelligence development. But a closer look shows that the US is still a leader where it counts, even though China has its strengths and is pouring in significant investments to catch up. James Pang says that China still has to knuckle down and get its fundamentals right, if it is to truly surpass its rival.
Read more

Grace Chong - 26 November 2021
The pandemic and China's zero-Covid policy have led some in the West to caution against the danger of China turning inward, closing its border to the world, building a man-made bubble, and adopting a closed nationalist discourse. But academic Lance Gore says China has always been a civilisation unto its own, and it now has both the means and reasons to decouple from the Western-led capitalist system to some extent, so as to pursue its own path of building socialism with Chinese characteristics. This might bring some benefits to China but could also lead to their misreading of the world in the long run, and cause it greater pain when its efforts to lead and galvanise are not reciprocated.
Read more

Grace Chong - 25 November 2021
Academic Pei Sai Fan says that one should dream big with the metaverse and not only see it as a new avenue of making money. By creating a new virtual universe from scratch, we can make good use of the blockchain-based metaverse to promote an equitable, more transparent and more inclusive rules-based international digital currency and financial system and enhance the global governance system to deal with issues facing all countries. This would require a global approach and China is well placed technologically to actively participate and lead the effort with like-minded nations in creating such a metaverse. It would be a pity if countries squandered such an opportunity to truly build a better world for all mankind.
Read more
Translated by Grace Chong on 31 January 2020

The coronavirus that broke out in Wuhan and spread to Taiwan could have been an opportunity to break the stalemate in cross-strait relations; instead, it highlights deep distrust and a widening gap between Taiwan and mainland China. Recent developments do not bode well for cross-strait relations in the years ahead.

As donated medical supplies were rushed in to Wuhan from Japan, the Philippines, the US, India, the UK and others, Taiwan’s ill-timed export ban of surgical and N95 masks has been criticised by many as a cold-blooded move. Meanwhile, the Taiwanese government and its supporters are renewing their condemnation of Beijing for blocking Taiwan’s participation in the World Health Organisation (WHO). The WHO, a specialised agency of the United Nations, requires statehood for membership and continues to exclude Taiwan. During the Ma Ying-jeou administration, Taiwan was able to attend the World Health Assembly, the global health forum of the WHO, but its participation seems unlikely under the current circumstances.

The boisterous presidential election of the Republic of China (ROC) ended on 11 January 2020, with the incumbent Tsai Ing-wen winning a second term. Cross-strait relations dipped to a historic low after May 2016 when Tsai took office. In her re-election victory speech, Tsai expressed hope to improve relations with Beijing, based on four principles: peace, parity, democracy and dialogue. A breakthrough in cross-strait relations seems to be a major goal she wishes to achieve during her second term.

However, the prospect for a cross-strait dialogue does not look promising. President Tsai and many people in Taiwan believe that Taiwan’s future must be determined by the 23 million people on the island. In response, China’s Taiwan Affairs Office spokesman insisted that Taiwan’s future should be determined by all the 1.4 billion Chinese people, including those in Taiwan. Such a view may sound outlandish in today’s Taiwan but appears to enjoy widespread support on the mainland.

In the delicate Taiwan-China relationship, semantics matters a lot.

In an exclusive interview with the BBC shortly after her re-election, Tsai elaborated on her view of cross-strait relations. When asked by the BBC’s John Sudworth if she favoured Taiwanese independence, she said, “We don't have a need to declare ourselves an independent state. We are an independent country already and we call ourselves the Republic of China (Taiwan).”

The importance of semantics

What is unclear is her definition of the ROC. Does she truly believe in the ROC or just use it as a cover for a “Republic of Taiwan” that many of her supporters have strived to establish? She promised to maintain the status quo and urged Beijing to face the reality of Taiwan’s independence. Her “status quo” is obviously different from Beijing’s; it is apparently also different from that of her predecessor Ma. One wonders whether her “ROC Taiwan” is the same as the ROC Ma referred to, which was founded on the mainland in 1912 and moved to Taiwan in 1949 after losing the Chinese Civil War. The key is whether she believes Taiwan and mainland China are parts of the same country, based on the ROC Constitution.

From Beijing’s perspective, if the two sides are already two separate countries, what’s the point of talking to each other?

In the delicate Taiwan-China relationship, semantics matters a lot. When Tsai says Taiwan is already an independent country, Beijing believes it’s a departure from the “one China” principle that formed the foundation for cross-strait interactions in the past. Interestingly, when Ma said similar things, Beijing never challenged him. The difference is Beijing trusted Ma but does not trust Tsai.

The two sides can indeed talk to each other on the basis of parity, as evidenced by the November 2015 meeting in Singapore between Ma Ying-jeou and Xi Jinping. To avoid any hint of inequality, the two men simply called each other Mr. Xi and Mr. Ma during the historic meeting. The summit took place because Ma defined cross-strait relations as relations between Taiwan and the mainland within the ROC’s one-China framework.

Tsai’s definition of cross-strait relations is apparently based on her belief that Taiwan and China are two separate countries, similar to the 1999 Democratic Progressive Party (DPP) Resolution on Taiwan's Future, which reads: “Taiwan is a sovereign and independent country. Any change in the independent status quo must be decided by all the residence of Taiwan by means of plebiscite.”

It is virtually impossible to expect Beijing to talk to Tsai if she insists on Taiwan’s independent status from China. From Beijing’s perspective, if the two sides are already two separate countries, what’s the point of talking to each other? Hawks in Beijing may even argue that using force to bring Taiwan back to the motherland is the only option left.

To Beijing’s disappointment, Tsai’s view on cross-strait relations seems to enjoy the support of the majority of people in Taiwan. The tide has turned. Only a diminishing number of people in Taiwan still consider themselves as Chinese or favour unification with China.

The Chinese Nationalist Party or the Kuomintang (KMT) has been the persistent and proud defender of the ROC. Ironically, during the 2020 election, Tsai successfully grabbed the discursive power and projected herself as the protector of the ROC, putting the KMT on the defensive. The KMT will be compelled to revamp its mainland policy since many believe it lost the recent election due to its pro-China stance. Already, some members of the KMT are pondering ways to move forward, such as ditching the so-called “1992 Consensus” or removing “Chinese” from the Party’s name. One should not be surprised if the KMT’s mainland policy becomes similar to the DPP’s in order to survive in Taiwan.

On the other hand, instead of reflecting upon what has gone wrong with its Taiwan policy, there is still no soul-searching in Beijing, and China appears to have hardened its position. At the Taiwan Affairs Conference organised by the Communist Party central committee following Taiwan’s election, Wang Yang, a top leader who handles cross-strait relations, repeated the Party line of sticking to the 1992 Consensus and the “one country, two systems” model while acknowledging cross-strait situations are becoming more complex and grim.

Notably, at the conclusion of President Xi’s recent visit to Myanmar, China and Myanmar issued a joint statement, reaffirming the one-China principle. In the English version, Myanmar states that Taiwan, Tibet and Xinjiang are inalienable parts of China, but the Chinese version states that Myanmar considers Taiwan, Tibet and Xinjiang to be inseparable parts of the People’s Republic of China. It is unclear whether this is a translation blunder or an intentional signal of Beijing’s retreat from its past position that Taiwan is a part of “China”, an entity to be formed by both sides of the Taiwan Strait upon reunification.

Bolstered by her re-election victory and international support, Tsai is unlikely to concede to the one-China principle during her second term. Meanwhile, Xi has no room for compromise given strong nationalism in China and his stated goal of realising the “Chinese Dream” of national rejuvenation by mid-century.  Are the two sides on a collision course? If so, leaders on both sides must hit the brakes now before it is too late.

Politics
Will the new Kishida administration be more friendly towards China?