With the installation of those close to Chinese President Xi in the CCP’s Politburo Standing Committee and other factional groups practically eliminated, it is no longer useful to construct new factions based on autobiographical information. It could even be said that Xi now does not even have to follow his own rules. 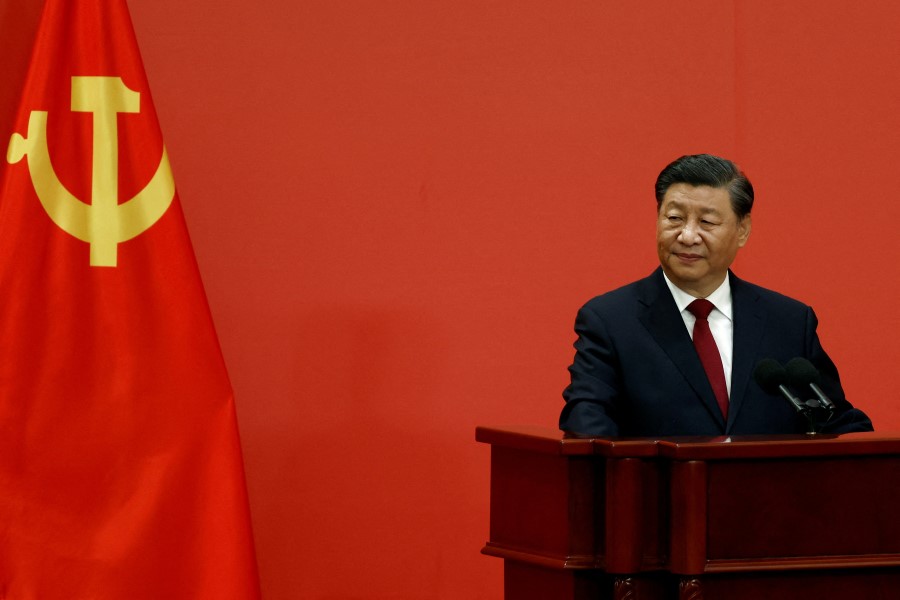 Chinese President Xi Jinping meets the media following the 20th National Congress of the Communist Party of China, at the Great Hall of the People in Beijing, China, 23 October 2022. (Tingshu Wang/Reuters)

Candice Chan - 30 January 2023
A mall in Shenzhen came under fire for putting up white lanterns with black text as part of its Chinese New Year decorations, while an “ugly” rabbit-shaped light decoration was removed from another mall in Chongqing. Academic Zhang Tiankan muses on tradition and innovation, and the evolution of traditional decorations.
Read more
Translated by Candice Chan on 8 November 2022

Xi Jinping’s complete victory at the 20th National Congress of the Chinese Communist Party (CCP) has practically put an end to factional politics in China. Unconstrained by political elites with real power at the top, Xi can pretty much do whatever he wants. Having ignored the norms and regulations of the CCP, he does not even need to follow his own rules. As such, it is no longer useful to construct new factions based on biographical information to shed any light on the actual operation of Chinese politics.

... Hu Jintao adopted Xi as a member of his own “faction”, even at the expense of some of his other more genuine proteges such as Li Keqiang and Li Yuanchao.

Hu Jintao, former general secretary of the CCP, former president of the People’s Republic of China, and former chairman of the Central Military Commission, is a role model of Youth League cadres. A disciple of Deng Xiaoping and Hu Yaobang, Hu has been a beneficiary of both Deng’s reform and opening policies and Hu Yaobang’s mentorship and patronage. It is not surprising that Hu wholeheartedly supported Xi Jinping, son of Xi Zhongxun who was also a good friend of Hu Yaobang, as a candidate for the Politburo Standing Committee (PSC) in 2007 and as a candidate for the top positions of the CCP in 2012.

Contrary to the popular belief that Xi was installed as the paramount leader ten years earlier because of his background as a princeling, it is my view that Hu Jintao adopted Xi as a member of his own “faction”, even at the expense of some of his other more genuine proteges such as Li Keqiang and Li Yuanchao. A good communist, Hu believed that he was doing it in the best interests of the CCP.

Unexpectedly, Xi turned against his patron and immediate predecessor at the 20th Party Congress. With Xi’s personal direction and deployment, Hu was removed from the conference hall in the Great Hall of the People on the last day of the 20th Party Congress in front of 2,338 deputies and special guests as well as the international media.

Having ignored the norms and regulations of the CCP, he does not even need to follow his own rules.

Meanwhile, Premier Li Keqiang, who was a potential candidate to replace Xi as the next general secretary of the CCP, failed to make it into the 20th Central Committee. Chairman of the National Committee of the Chinese People's Political Consultative Conference Wang Yang, who was a potential candidate to replace Li Keqiang as China’s next premier, is also absent from the 20th Central Committee. Moreover, Vice-Premier Hu Chunhua, a frontrunner of the sixth-generation leadership who has served in the Politburo for ten years, is no longer a member of the 20th Politburo.

As a result of the 20th Party Congress, Xi has become the most powerful man in China without any constraints. Having ignored the norms and regulations of the CCP, he does not even need to follow his own rules.

... Li Qiang might inadvertently turn himself into Xi’s competitor if he assumes that he would be China’s next premier...

Li Qiang, the second-highest-ranking member, was replaced by Chen Jining, former mayor of Beijing and a new member of the 20th Politburo, as party secretary of Shanghai on 28 October 2022. However, Li Qiang was not nominated for a specific position in the State Council at the 37th session of the Standing Committee of the 13th National People’s Congress chaired by Li Zhanshu from 26 to 30 October 2022. Without any work experience in the central government, this would have been a great opportunity to install him as vice-premier in anticipation of his supposed future role as China’s next premier.

It is a reminder that it is too early to be certain that Li Qiang will be China’s next premier, as China’s next premier will only be decided by the next National People’s Congress scheduled for March 2023.The members of the new PSC should in fact be very careful about their own assumptions.

For instance, Li Qiang might inadvertently turn himself into Xi’s competitor if he assumes that he would be China’s next premier, as it cannot be ruled out that Xi might want to be both the top party leader and the top government leader at the same time, following the example of Hua Guofeng, Mao Zedong’s successor, who held the titles of party chairman, CMC chairman, and premier simultaneously. Last year, during the centennial year of the CCP and what would have been the 100th birthday of Hua, the CCP commemorated Hua and praised him as a model and benchmark. The high-profile commemoration events invited much guessing and speculation from Chinese observers.

What is clear, however, is that with other factional groups practically eliminated, it is no longer useful to construct new factions based on biographical information. For instance, there have been discussions of “the cosmos club” (航天系 hangtianxi or 宇宙帮 yuzhoubang) in the literature in Chinese politics. It is true that many of the central and provincial leaders have backgrounds in the space and aviation industries. Two new members of the 20th Politburo, for instance, could be classified as members of this new faction because of their background: Ma Xingrui and Yuan Jiajun.

The same is true of Yuan Jiajun, party secretary of Zhejiang. With a background in aerospace, Yuan, aged 60, started his political career in March 2012 when he was appointed a standing member of the Ningxia Hui Autonomous Region Party Committee. He entered the 20th Politburo not because he shared the same background with Ma but because he has worked in Zhejiang, a factional base of Xi where Xi worked for more than four years.

It is hard to imagine that these people would form an independent political faction to challenge Xi in any meaningful way. But one cannot completely rule out the possibility that these people and many others would switch their sides if Xi is perceived to be weak in the future. If Xi’s international and domestic policies backfire in the next five years, there will be strong pushback from foreign leaders and domestic political forces separately or in concert. Consequently, the balance of power might tilt in his disfavour.