Even as the US government blacklists several Chinese companies for being “Chinese Communist military companies” or a national security threat, Wall Street does not seem fazed; investors seem prepared to put their money where their mouth is when it comes to betting on China. 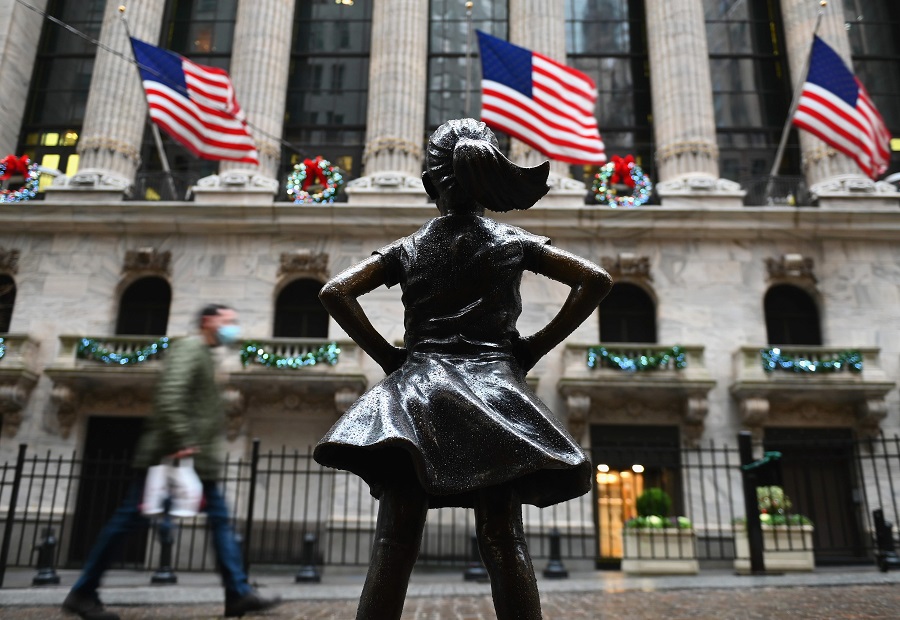 People walk past the New York Stock exchange (NYSE) and the 'Fearless Girl' statue at Wall Street after heavy rainfall on 30 November 2020 in New York City, US. (Angela Weiss/AFP)

Grace Chong - 30 January 2023
Amid ongoing tensions, a high-level visit by US Secretary of State Antony Blinken to China in the coming week shows hope for improved relations between the two economic powerhouses. Zaobao correspondent Yu Zeyuan notes that while the meeting may not produce practical results, it is a much needed exchange to manage and control China-US relations from worsening.
Read more
Translated by Grace Chong on 9 February 2021

After 20 January 2021 when president-elect Joe Biden was sworn in as the 46th president of the US, he swiftly signed 30 executive orders in the first three days of office, reversing many of the prior administration’s most controversial policies such as leaving the Paris Agreement on climate change.

Nevertheless, Executive Order 13959 (EO13959), a notable order from the Trump administration signed on 12 November 2020, which labelled a handful of Chinese companies as “Chinese Communist military companies”, was not among those reversed.

Until now, there has been no de-escalation of adversarial foreign policies between the two largest economies in the world after more than two years of trade war. In fact, Biden’s “Made In All Of America” plan suggests such a tough stance would likely persist, or at least not subside in the near future. What are the implications for the US as well as international investors under such a cloud of political uncertainty?

The US makes use of two blacklists with respect to Chinese firms. The first is called the “Commerce list” or the “Entity list”, created in 1997, which specifies target companies, research institutions, government and private organisations, and other legal persons whose operations are deemed “contrary to the national security of foreign policy interests of the United States”. Any US companies wanting to do business with the entities on the list require government approval.

The second is the Pentagon’s list, created in 1999 under the National Defence Authorisation Act of 1999 pertaining to “Communist Chinese military companies operating in the United States”. It restricts investments in targeted companies by American investors, including both individuals and institutions, and applying to all forms of securities including equities, derivatives, and even funds.

Because both lists allow large rooms for interpretation, the executive branch in the US maintains a high level of discretion in applying either list to specific companies.

But EO13959 was a particularly “generous” interpretation of the Pentagon’s list by naming and labelling major telecommunications companies in China and even real estate companies such as China Jimao Holdings Group headquartered in Hong Kong, as Chinese Communist military companies.

America has decided to use EO13959 to directly punish or bar specific firms on the premise of national security.

The recent developments pertaining to the financial markets underscore the US’s pincer approach to Chinese firms.

In the midst of an ongoing trade war between the two countries since 2018, a direct consequence of the EO13959 is the open pathway for financial markets to be used as another weapon to exclude Chinese firms from accessing US financial markets directly.

America has decided to use EO13959 to directly punish or bar specific firms on the premise of national security. As most Chinese companies likely deal with the Chinese Communist Party (CCP) in some way, either through supplying local or the federal governments, or through benefiting from financing of some form, a valid concern for both corporate managers and investors (both American and non-American) is whether the policy will be further weaponised potentially for reasons beyond national security.

For example, Xiaomi, a Chinese smartphone and home electronics appliance maker, was included on the list of Chinese Communist military companies. Since EO1959 did not provide an explanation for the inclusion of specific companies and only lists the affected companies, Xiaomi has since sued the US government for placing it on a blacklist.

In January 2021, three listed Chinese telecommunications companies — China Telecom, China Mobile and China Unicom — were among the first few to be delisted from the New York Stock Exchange (NYSE) as a result of EO13959. On 4 January 2021, the NYSE suddenly decided not to delist the companies, only to announce two days later on 6 January that it will proceed to delist the companies.

China has not expressed a strong intention to retaliate.

Power struggle between Wall Street and the White House?

The executive order originally also included tech giants Alibaba, Baidu and Tencent in its blacklist. However, these companies were removed from the list partly due to former Secretary of Treasury Steven Mnuchin and others who feared that would trigger economic fallout by widespread selloffs.

Moreover, Wall Street seems to be taking the more pragmatic route of not missing out on the large growth opportunities from China’s strong recovering economy. While Blackrock has been given full access to the Chinese market, Goldman Sachs Group, Inc. and JPMorgan Chase & Co. are trying to get full access to their Chinese ventures. According to Wind Info, a data provider headquartered in Shanghai, about 97% of the public-funded mutual funds in China have been earning at least positive returns.

... the exclusion of Chinese firms from American capital markets are less likely to be effective in a world with many developed financial markets.

Although both parties lose something — as is the case with most adversarial trade policies, one may still lose more than the other. A crucial assumption underlying America’s punitive intention of EO13959 is that the American financial system is fodder for the targeted Chinese companies. According to Bloomberg, Chinese companies have raised at least US$144 billion over more than two decades from American financial markets. Although objectively a large figure, China’s stock market has also grown tremendously, with the total stock market capitalisation of over US$8.5 trillion in 2019 compared to US$420 billion in 2003. According to Bloomberg, over the same period, the US’s share of global stock market capitalisation has declined from 45% in 2003 to around 40% in 2019.

Following EO13959, Bloomberg Quint reported that the companies listed on the Hong Kong stock exchange that are directly affected by it are still included in the Tracker Fund of Hong Kong, the city’s most liquid exchange-traded fund. Therefore, the exclusion of Chinese firms from American capital markets are less likely to be effective in a world with many developed financial markets. In 2020, China ranked as the top destination for foreign direct investment (FDI), surpassing the US for the first time in decades whereas the FDI into the US dropped by 49%.

The weaponisation of financial sanctions will lead to the financial and even potentially economic decoupling of the two largest world economies. For example, a recent study by academics suggests that even just the uncertainty in future trade policy may induce adverse pre-emptive action by companies to more aggressively offshore their production rather than re-shore back into America.

Pathway for international investors in the midst of uncertainty

Unfortunately, the new Biden administration has not unwound some of the aggressive economic and financial market policies that have created a hostile Sino-American relationship. At the minimum, the tension is not seen to be decreasing in the eyes of the public.

Furthermore, it remains unclear whether these policies in both the US and China may change quickly as China may adopt a tit-for-tat strategy against the US just as it has against Australia. The risk and uncertainty in such escalation pose significant risks for investors all around the world.

As for investors in Singapore, the banning of American investors from owning equity in emerging Chinese firms presents a unique opportunity to fill the gap of American investors. Investors should also consider holding a more globally diversified portfolio of assets so as to reduce their risks associated with adversarial policy stances.

Related: Pick a side: China will counter US sanctions with lawsuits | The blacklist: When will China pull the trigger? | What happened to Baidu, once China's golden boy of innovation?