Wary of Sino-Russian influence, Mongolia seeks better ties with the US

The ruling Mongolian People’s Party (MPP) won a strong mandate in recent elections where it secured 62 seats out of 76. While it has done well to manage the Covid-19 crisis in Mongolia, its foreign policy room for manoeuvre remains limited due to the need to juggle demands from its closest neighbours, China and Russia. How will it keep the balls in the air with the US thrown into the mix? 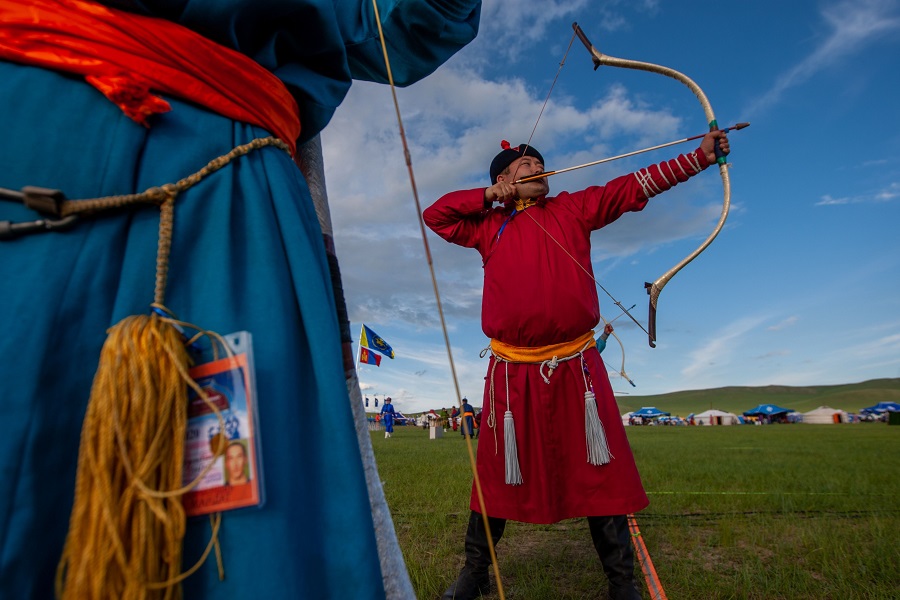 This photo taken on 11 July 2020 shows competitors during an archery competition at the annual Naadam sports festival near Ulaanbaatar, in Mongolia. (Byambasuren Byamba-ochir/AFP)

Grace Chong - 25 November 2022
China’s resurgence of Covid-19 infections has widened the gap between the young workers opposed to the tightening of controls, and the older generation that feel safer with strict measures in place. Given that the elderly make up a high proportion of the Chinese population, Chinese authorities seem to be holding fast to the dynamic-zero policy. Zaobao correspondent Wong Siew Fong tells us more.
Read more
Translated by Grace Chong on 9 July 2020

The elections were centred on the agendas of looming corruption, anti-incumbency, and dissatisfaction with the government. Despite these challenges, MPP managed its re-election due to having a strong political base as the oldest party.

Despite doubts that the incumbent Mongolian People’s Party (MPP) would face a tough challenge from the opposition Democratic Party, MPP confirmed its re-election by winning 62 seats out of total 76 in the parliament, though this was three seats less from its 2016 tally. MPP received 44.9% of the popular vote under the multi-member plurality voting system. The elections saw a total of 606 candidates in the contest across 13 mainstream parties, four major coalitions and a record 121 independent candidates seeking election to the State Great Khural (parliament).

The elections were centred on the agendas of looming corruption, anti-incumbency, and dissatisfaction with the government. Despite these challenges, MPP managed its re-election due to having a strong political base as the oldest party. MPP was founded in 1920 as Mongolian People’s Revolutionary Party and remained the only ruling political party until 1997. With the rise of democracy and new political parties in the 1990s, the party has constantly gone through several changes. The fact that MPP is led by several young parliamentarians has also helped convince the people that the party is active and competent.

Inspired by the 1989 democratic innovations in the neighbouring erstwhile Soviet Union and Eastern European countries including Hungary, East Germany, Bulgaria, Czechoslovakia and Romania, Mongolia’s 1989 democratic movement brought a multi-party system along with a new constitution in 1992. In the past thirty years, the democratic system in Mongolia has gone through a number of changes in governance and constitution. In 2008, a multi-party plurality system was adopted followed by constitutional amendments focusing on the power balance between the president and prime minister.

Challenges before the new government

With his re-election as the prime minister, U.Khurelsukh faces immediate challenges both, at home and aboard. At home, Khurelsukh will have to bridge the economic divide between urban and rural Mongolia. Even during elections, rural candidates were outnumbered by the urban ones, creating an urban-rural divide in representation. Corruption and poor economic policies have led the country towards 30% of people living in poverty. Controlling pollution is another challenge faced by the government. The capital city Ulaanbaatar has become the symbol of an acute shortage of fresh drinking water and air. Also, the country has a high rate of unemployment. In 2019, Mongolia's unemployment rate reached a record all-time high of 11.8%. While policies have been made to meet these challenges, implementation remains to be seen.

The young Mongolians are miffed by the two-front involvement from China and Russia in draining the country’s natural resources in the name of foreign direct investment, including hydro-electricity development by China.

During his oath-taking ceremony on 2 July 2020, Prime Minister U.Khurelsukh promised to focus on promoting social justice and building a “Digital Mongolia", improving livelihoods and expanding the middle class, and sustaining balance between urban and rural development. In fact, Mongolia has become a global example in controlling the spread of Covid-19 cases. It is among very few countries to have closed its borders in January as part of its preventive measures to control Covid-19. As of 2 July, Mongolia has reported a total of 220 cases with no casualties.

Balancing between China, Russia and the US

On the foreign policy front, Mongolia has been hindered by the external influence from China and Russia. Mongolia was considered a satellite state of the erstwhile Soviet Union and with the disintegration of the Soviet Union in 1990, China began to tie its hands in terms of trade and investment. A resource-rich country with coal and copper, Mongolia exports 90% of its mined products to China, invariably, making it dependent on the latter for cash inflow. For its petroleum needs, Mongolia depends on supplies from Russia. The young Mongolians are miffed by the two-front involvement from China and Russia in draining the country’s natural resources in the name of foreign direct investment, including hydro-electricity development by China.

Mongolia actually wishes to diversify its strategic ties with other countries, especially the US.

Meanwhile, it has been difficult for Mongolia to do away with the Sino-Russian influence, especially on the strategic front. For instance, with its stated military prowess, China wants Mongolia to join the Beijing-based Shanghai Cooperation Organisation. Mongolia actually wishes to diversify its strategic ties with other countries, especially the US. President Trump has been vocal in bringing Mongolia under NATO as a partner, but considering the unpredictability of President Trump, Mongolia cannot risk intimidating its neighbours. India is also looked upon as a promising partner of Mongolia. In October 2019, President Khaltmaagiin Battulga paid a state visit to India which caused immense unease in China. It was reflected through a muted coverage of the visit by Chinese media. A similar pattern of Chinese unease was observed during Prime Minister Modi’s visit to Mongolia in 2015, the first-ever visit by an Indian Prime Minister. However, the viability of these options is held hostage by its geography.

To conclude, the newly elected government in Mongolia led by Prime Minister U.Khurelsukh has a clear political mandate. Having proven its success in handling the Covid-19 crisis, the government can further focus on improving employment, water and air quality and socio-political and economic divide between urban and rural Mongolia. Although the country has long-lasting coal and copper reserves, their export story must be reflected in the financial well-being of the country. Similarly, Mongolia can look to diversify its ties away from China and Russia on the strategic front but it will be a challenge to avoid Sino-Russian high-handedness.

Related: Even as the US obstructs its way, how can China build trust for the BRI? | Could fallout from China-India standoff hurt China's global ambitions?