As the Kishida administration takes shape with adjustments in various appointments, one key change is Toshimitsu Motegi shifting from foreign minister to become LDP Secretary-General, and Yoshimasa Hayashi taking over as foreign minister. In particular, Hayashi is a self-professed "pro-Chinese", and will probably play a significant role in Japan's policies toward China. Japanese academic Shin Kawashima looks at how Japan-China relations might develop. 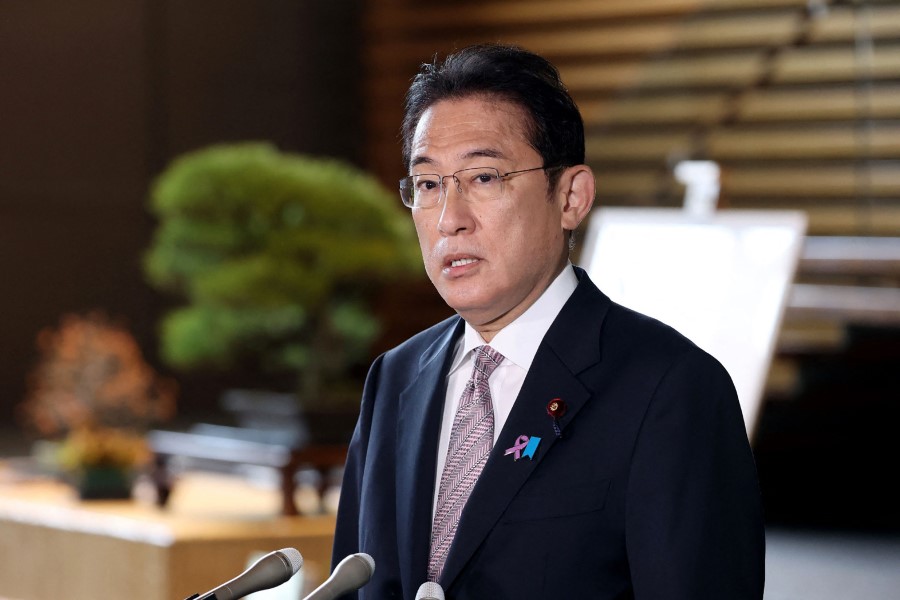 Japan's Prime Minister Fumio Kishida speaks to the media at his office in Tokyo on 19 November 2021. (Jiji Press/AFP) / Japan OUT

Candice Chan - 20 June 2022
The Fujian, China’s third aircraft carrier, was launched on 17 June. The highlight is the electromagnetic catapult system for launching aircraft, which could put it on par with much of the US’s cutting-edge technology in the field. Zaobao correspondent Yu Zeyuan takes a closer look at the implications of this development.
Read more
Translated by Candice Chan on 1 December 2021

The Liberal Democratic Party (LDP) emerged as the winner in the lower house election and Kishida felt that he has finally won Japan's support. Indeed no prime minister would be satisfied with assuming the prime ministerial role simply by becoming the president of the LDP. New prime minister Kishida clearly also believed that a majority win through leading his own election would cement the foundation for his administration.

Former Secretary-General Amari has always fiercely emphasised economic security and holds a relatively strict position on China. It is common knowledge that some inside the national defence and foreign affairs ministries of the LDP administration are extremely critical of China.

Previously, Toshihiro Nikai, who was the secretary-general before Amari, stressed the importance of Japan’s relationship with China and succeeded in his job of quieting hawkish voices. But under Amari, those disapproving sentiments inside the LDP were delivered straight to the Prime Minister’s Office.

However, the retreat of Amari and the emergence of the new secretary-general Motegi has changed the political landscape. Motegi has experience as a foreign minister and is a member of the LDP faction Keiseikai, so he is a politician who pays attention to China.

Second, the LDP won in the lower house election, but not by a landslide. Therefore, the cooperation of the Komeito party, which helped secure this victory, should be given some weight.

Komeito has already made strong demands of the LDP regarding some domestic policies, such as payouts to households with children. Komeito traditionally tends to favour good relations with China, and Komeito’s stronger voice will influence the Kishida administration’s policies towards China.

However, the Nikai faction headed by Toshihiro Nikai lost a large number of seats in this election, meaning Nikai’s influence inside the LDP will diminish.

Third, Yoshimasa Hayashi, who has succeeded Motegi as foreign minister, belongs to the Kochikai faction, which is led by Prime Minister Kishida.

Hayashi is the chairman of the Japan-China Friendship Parliamentarians’ Union. He is a hereditary politician descended from generations of politicians in Yamaguchi Prefecture, and his ancestors are known to have had some kind of relationship with Sun Yat-sen. He has called himself “pro-Chinese”. If nothing else, he is not “anti-China”.

As a foreign minister, Hayashi will most likely play a significant role in the Kishida administration’s policies towards China.

Prime Minister Kishida and Foreign Minister Hayashi, the number 1 and 2 of the Kochikai faction, respectively, shoulder the burden of diplomacy; and former Foreign Minister Motegi as LDP secretary-general is keeping the hawkish LDP members at bay. This is most likely the blueprint of the Kishida administration.

On the other hand, Prime Minister Kishida also has experience as a foreign minister and his diplomatic stance then was essentially about striking a balance between the US and China.

In his policy speech on 8 October 2021, he stated that “With China, building stable relations is critically important for both our nations, as well as for the region and the international community. Through cooperation with countries with which we share universal values, I will say to China the things that need to be said and strongly urge China to act responsibly, while at the same time continuing dialogues with China and cooperating on matters of common interest.”

He also vowed to do more than the Suga Yoshihide administration and cooperate with China. In that regard, he shares the same views as the new foreign minister Hayashi.

Prime Minister Kishida and Foreign Minister Hayashi, the number 1 and 2 of the Kochikai faction, respectively, shoulder the burden of diplomacy; and former Foreign Minister Motegi as LDP secretary-general is keeping the hawkish LDP members at bay. This is most likely the blueprint of the Kishida administration.

That is, while the Kishida administration may look to cooperate with China on climate change issues, it will most certainly take a tough stance on military and security issues. This would be similar to the Biden administration’s tough stance towards China on security, human rights, and Taiwan issues, even while it continues to seek cooperation with China.

On the other hand, one cause of concern for the Kishida administration is the movement of the Abe faction, the largest faction in the LDP. It is possible that former Prime Minister Shinzo Abe will insist on conservative policies as a member of the Diet. Hence, while the Kishida administration will most likely see cooperative projects with China materialise in the future, it will need to actively persuade members of the LDP to support its cause.

The primary focal point is how the Troika system of Kishida, Hayashi and Motegi will function. Beyond that, formulating a new national security strategy as Japan continues to engage in cooperative projects with China will be a crucial agenda.

Related: Can Japan rise above factional politics and become the 'bridge to the world' under new PM Kishida? | No concrete vision for future Japan-China relations despite telephone talks between Xi Jinping and Fumio Kishida | Is the ‘rise of China’ to blame for shifting China-Japan relations?