To help businesses get back on their feet, the Wuhan municipal government recently announced that it is raising 20 billion RMB to roll out a rescue package for small and medium enterprises (SMEs). On the ground, many companies find themselves in more dire straits now than when the city was under a complete lockdown, and business owners are generally not confident of surviving the present downturn. 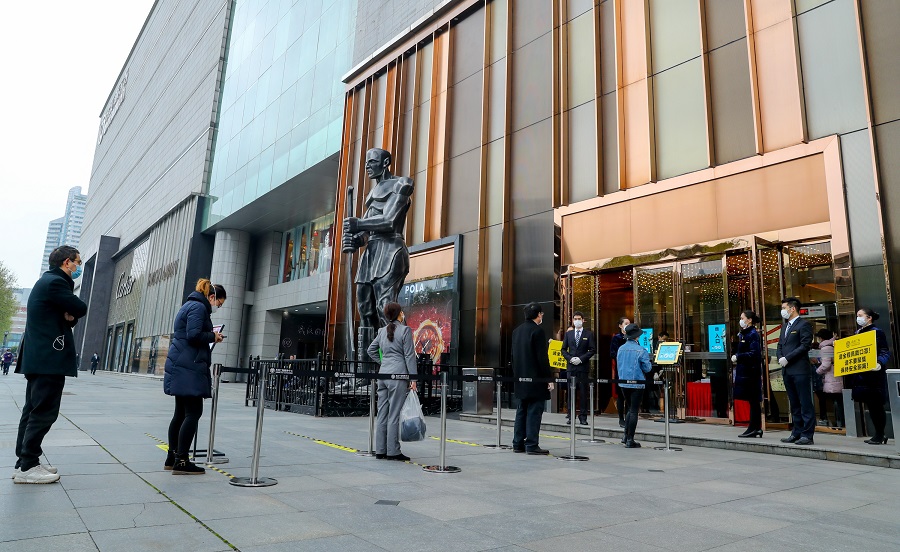 In this photo taken on 30 March, consumers line up and wait to enter a mall in Wuhan after it resumed operations. (CNS)

Grace Chong - 21 June 2022
Over the past several years, Chinese private firms have ferociously invested in India’s tech start-ups. Initially welcomed, China’s diversion of interest from erstwhile US investment has been viewed with some measure of suspicion since the Galwan Valley conflict. Are we living in a world where investment patterns are determined by statecraft? ISAS academic Karthik Nachiappan examines the issue.
Read more
Translated by Grace Chong on 3 April 2020

On 30 March, 40-year-old Wang Bin who runs three restaurants serving Sichuan cuisine in Wuhan, held a two-hour-long teleconference from home with his staff. The discussion was on the new operating model for his restaurants after companies in Wuhan reopen for business on 8 April. Even though Wang Bin can resume business, he has decided to provide only take-out and not dine-in service for now. At the moment, his aim, to quote him, is to “cut losses, stay liquid and try to survive”.

After more than two months of suspension, restaurants like Wang Bin’s are ready to welcome the restarting of Wuhan’s economy. On 8 April, the lockdown of Wuhan will be lifted completely. In the past week, Covid-19 prevention measures and restrictions on movement in Wuhan have been gradually relaxed. With workers returning to work and production lines running again, the long-absent bustle has returned to the streets.

"The resumption of business could be the start of my bankruptcy journey." - Wang Bin

However, Wang Bin is having mixed feelings. He said, “Many issues were put on hold during the lockdown. After work resumes, a lot of problems will surface.”

For Wang Bin, the biggest problem is not the losses he racked up during the lockdown, which to him, “is still a tangible amount”. Instead, he worries about how to ensure the survival of his business in the face of pressure to change the operating model, reduced consumption and weaker spending power.

His understanding is that food and beverage (F&B) outlets in Wuhan will not be allowed to provide dine-in services for now. To Wang Bin, this means that he would have to focus on breaking even because costs and expenses would continue to rise. He said, “If we are short-handed, we may not be able to cope with the business volume. Conversely, we may not survive if we over-hire. Returning to normalcy will be a trying process.”

Another problem that business owners face after work resumes is rental. Wang Bin’s rental losses during the pandemic amounted to 2 million RMB (or S$400,000). He said, “During the pandemic, the landlords were gracious enough to not press for rental. But after work resumes, it is impossible for them to continue waiving or reducing payments since they are also pressured by banks to service their mortgages.”

...nearly 50% of Hubei companies (mainly in Wuhan) face bankruptcy, with 57.59% of the respondents of the view that they could at most hold out for three months.

Wang Bin was candid about the worst-case scenario: “The resumption of business could be the start of my bankruptcy journey. For individual businesses, there are tougher tests ahead. Whether we can weather this lengthy period until positive (business) sentiments return is our biggest challenge.”

Unlike other places in China, Wuhan was locked down for more than two months and along with it, there was the large-scale suspension of economic activities. As the last entities to reopen, businesses in Wuhan face even tougher challenges to get back on their feet.

Luo Zhi, director of the China New Private Economy Research Centre at the Wuhan University, warned in a recent article that findings of a business survey show that nearly 50% of Hubei companies (mainly in Wuhan) face bankruptcy, with 57.59% of the respondents of the view that they could at most hold out for three months. By the end of March, Hubei was still awaiting the large-scale resumption of work. This meant that about half of Hubei businesses that have struggled on for two and a half months were at their breaking points. The probability of bankruptcy is soaring, and SMEs are bearing the brunt of the situation.

Besides the F&B and retail sectors, the pillar industry of automotive manufacturing is also crucial to rebooting the Wuhan economy. On 24 March, Chang Jiang Daily (《长江日报》), the newspaper of the Communist Party of China committee in Wuhan, reported that all suppliers of Wuhan automotive companies have been given approval to resume work. At the same time, overall work resumption rate was above 95% and the supply-chain risk caused by shuttered suppliers has been resolved.

However, resuming work does not mean that production capacity has returned to pre-pandemic levels as automotive companies would still need to tackle operational issues. In an interview with the China News Weekly (《中国新闻周刊》), a member of the senior management at the Dongfeng Motor Corporation headquarters in Wuhan shared that the company obtained approval to resume work on 11 March but were unable to do so immediately because many places in Wuhan and Hubei were still under lockdown, causing manpower and logistical constraints.

After the lockdown in Wuhan is completely lifted on 8 April, the problems mentioned earlier will be mitigated even though more fundamental and long-term issues remain. The extended interruption to the manufacturing industry in Wuhan could have impacted its position in industry and supply chains. Ye Xueping who helms the Institute of Economics at the Hubei Academy of Social Sciences, explained that as the rest of China returns to work, the continued absence of Wuhan companies may cause their partners to seek new vendors to keep the supply chain running.

Professor Chen Bo of the Huazhong University of Science and Technology was more optimistic when interviewed by this reporter. According to him, the position and influence of the Wuhan automotive manufacturing industry will not be significantly affected by the pandemic because relocating the automotive supply chain domestically is no mean feat. In any case, the depressed global demand for automobiles now will not cover the relocation costs involved.

Professor Chen also added that as the origin of the pandemic, Wuhan has suffered negative publicity. This could hit short-term investment confidence, leading to lower domestic and foreign investments. It could take a while for this bias towards Wuhan to be gotten rid of.

Businesses worse off after lockdown lifted

To help businesses get back on their feet, the Wuhan municipal government recently announced that it is raising 20 billion RMB to roll out a rescue package for SMEs. Experts have also weighed in with suggestions such as greater financial support for the private sector and tax incentives. Nonetheless, many companies find themselves in more dire straits now than when the city was under complete lockdown, and business owners are generally not confident of surviving the present downturn.

"In the last two months or so, many Wuhan residents have passed away, while even more were forced to stay at home. No one knows whether this could yet have a deeper impact on lifestyle and spending habits.” - Wang Bin

48-year-old Dan Haitao runs three hotels in Wuhan. He said that even though his hotels can reopen from 8 April, the absence of tourists and paucity of business visitors mean that he is not expecting many guests. “March to May is our peak season annually, but that won’t be the case this year,” he said.

The lockdown has left him with 60,000 RMB in outstanding rental. Dan said, “I feel that there is only a 50% chance that the local economy will recover. My cash flow is still okay, but a year of poor business would mean I have to pay for the rental out of my own pocket, and that would be terrible.”

Restaurant owner Wang Bin contracted Covid-19 in February but has made a full recovery since. He said, “The people of Wuhan have been hurt badly. Like tens of thousands of others in Wuhan, I was infected by the coronavirus. In the last two months or so, many Wuhan residents have passed away, while even more were forced to stay at home. No one knows whether this could yet have a deeper impact on lifestyle and spending habits.”

Wang Bin is convinced that in this crisis with no end in sight, brick-and-mortar business owners, landlords, banks and the government need to work together to survive. He told this reporter: “There is no need for us to think of anything else this year, except to hope that we are still in business when 2020 ends. Getting through 2020 is the best we can hope for.”