While virtual meetings between Xi Jinping and Joe Biden have usually followed in-person meetings between the countries’ top diplomats, there is no sign of a virtual summit taking place any time soon after China's Yang Jiechi and US national security adviser Jake Sullivan met in Luxembourg. For the US, internal disagreement over trade tariff issues could be causing the pause. And in the case of China, it has already let go of any false hope for better ties. 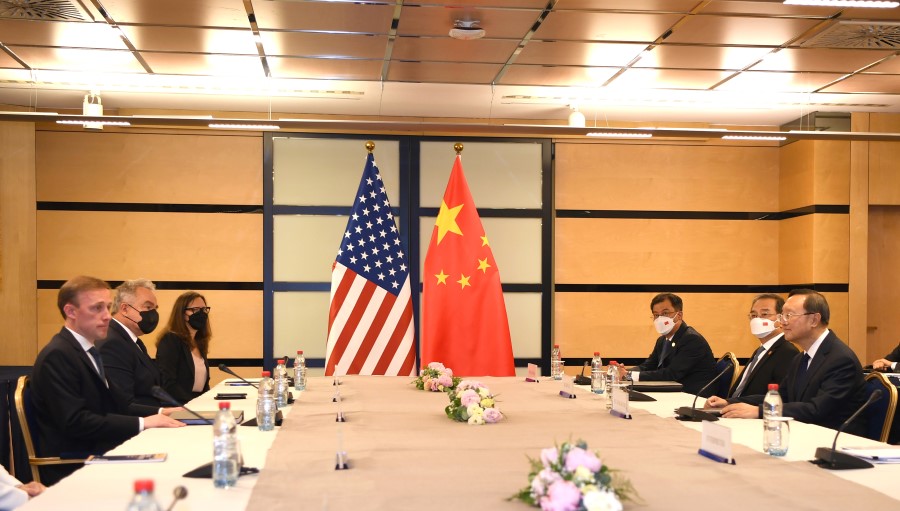 Yang Jiechi (first from right) and Jake Sullivan (first from left) at their meeting in Luxembourg, 13 June 2022. (Xinhua)

Candice Chan - 5 August 2022
China's "Foundation Plan" for iron ore has gained much official support, and is aimed at reducing reliance on foreign sources of iron, including Africa and Australia. The only way to do this effectively is for China to ramp up mining of its own iron resources. However, these resources are scattered and difficult to access, and of lower grade. This means China has its work cut out if it is to succeed.
Read more
Translated by Candice Chan on 24 June 2022

Following more talks last week in Luxembourg between Chinese Politburo member and director of the Office of the Central Commission for Foreign Affairs Yang Jiechi and US national security adviser Jake Sullivan, analysts predicted that a third virtual meeting between the Chinese and US leaders might not be far off.

However, looking at developments, it seems this rumoured meeting between Chinese President Xi Jinping and US President Joe Biden will not happen anytime soon. In fact, it feels like it is Biden and the top US leaders who are pushing for it, while China is in no hurry.

... in the face of 8.6% inflation — the highest in 40 years — will the US have to ease up on the trade war with China and lift some punitive tariffs that have been in place for the past three or four years?

In the past month, the US has given out frequent signals of a third virtual meeting between Xi and Biden. The day after his phone call with Yang on 18 May, en route with Biden to Asia on Air Force One, Sullivan hinted that Xi and Biden might be speaking within the next few weeks.

This past weekend, when questioned by reporters during a bike ride, Biden said he would speak to Xi soon, and was considering easing some punitive Trump-era tariffs on Chinese goods. And on 21 June, Biden confirmed that he planned to speak to Xi although a date has not been set.

Trade tariffs could be an elephant in the room

Over the past month, following these interactions between Yang and Sullivan, White House statements have focused on the Korean peninsula. But right now, one old problem in China-US relations is taking on a fresh urgency for the Biden administration: in the face of 8.6% inflation — the highest in 40 years — will the US have to ease up on the trade war with China and lift some punitive tariffs that have been in place for the past three or four years?

Right from the start, US Treasury Secretary Janet Yellen and Trade Representative Katherine Tai have not seen eye to eye on this. At a hearing this week, Tai clearly emphasised that tariffs on China are a “significant piece of leverage” that she would not give up, and that lowering levies on China would have limited impact on easing US inflation; on the contrary, the US should use tariffs to strengthen its competitiveness and maintain its interests in the global economy. She also criticised China for lacking commitment to fulfilling the China-US phase one trade deal.

On the other hand, Yellen has been persuading Biden to lift some punitive tariffs on Chinese goods. She feels that some tariffs have no strategic significance and hurt US companies and consumers, and worsen inflation. US Commerce Secretary Gina Raimondo has also recently said it “may make sense” to lift tariffs on some goods to lower inflation.

Since the Donald Trump era, the US has imposed four rounds of tariffs of 7.5% to 25% on US$370 billion worth of Chinese goods. While Biden maintained these punitive trade war tariffs after he took office, the US is currently facing high inflation and the US economy could even fall into a recession within the year. With his approval rating sinking to a new low, Biden is in a dilemma as to whether he should eliminate these tariffs.

An article by analysts of American think tank Peterson Institute for International Economics suggests that “the direct effect of removing tariffs on imports from China could lower consumer price index (CPI) inflation by 0.26 percentage points” but “the competitive impact of cutting the China tariffs could eventually lead to about a 1 percentage point reduction in inflation”.

David Adelman, former US ambassador to Singapore during the Barack Obama administration, told American media this week that inflation will be the “No.1 issue in midterm elections in the US in November”. He added that Biden has “one important tool in his toolbox” to control inflation, and that is “the ability to relieve the pressure on the American economy and American consumers that is caused by these very high tariffs rates that are imposed on more than $370 billion annually of Chinese imports”.

Adelman further said that the tariffs on Chinese goods have had “no negative impact on the Chinese economy” but have instead “acted as a boomerang on the US economy”.

While it may be too much of an exaggeration to say that China has not been affected by the tariffs at all, it is also clear that the US has not achieved its aim — China’s exports to the US even increased by 27.5% in 2021.

If punitive US-China trade war tariffs are not removed, China will simply work harder to be self-sufficient.

Wiser to set discussion aside amid harsh atmospherics

China has not shown much interest in the US’s discussions of tariff reductions thus far. This is perhaps partly because the decision lies with the US, and any comments made would only be dancing to the US’s tune. More importantly, maybe China’s top leaders are well aware that the days of mutually beneficial cooperation are at an end and China has to “prepare for the worst” in terms of trade splits and decoupling. If punitive US-China trade war tariffs are not removed, China will simply work harder to be self-sufficient.

Last week, the Chinese foreign ministry published a 40,000-word statement refuting points raised in US Secretary of State Antony Blinken’s speech on the US’s China policy and listed “21 falsehoods” in US perceptions of China. China also harshly criticised the US for “deploying its domestic and external resources to unscrupulously contain and suppress China”, clearly expressing its strong dissatisfaction. During the BRICS Business Forum on 22 June, Xi did not shy away from hitting out at the US either.

Under such an atmosphere, it may be difficult to arrange for a virtual Biden–Xi summit in the short term.

Moreover, earlier on 19 June, China successfully conducted a ground-based midcourse anti-ballistic missile test. That same day, the US’s strategic nuclear submarine successfully launched four Trident II D5 intercontinental ballistic missiles in the waters west of California, hitting their targets in the Pacific region. These events clearly demonstrate that China and the US are in total opposition to each other.

Under such an atmosphere, it may be difficult to arrange for a virtual Biden–Xi summit in the short term. But the leaders of great powers will eventually have to meet with each other someday. And maybe by then, tariffs will not be that much of a bargaining chip in China-US negotiations.