With Xi-ism, is extreme power quietly taking shape in China?

The 20th Party Congress has closed and the CCP leadership has been set. Chinese President Xi Jinping has further consolidated his authority after removing rival factions and promoting those loyal to him. Furthermore, Xi will reign over party ideology with “Xi Jinping Thought on Socialism with Chinese Characteristics for a New Era” and the “Two Establishes”. Nonetheless, Taiwanese commentator Chen Kuohsiang notes that the system cannot thrive without different views or a self-correcting mechanism. 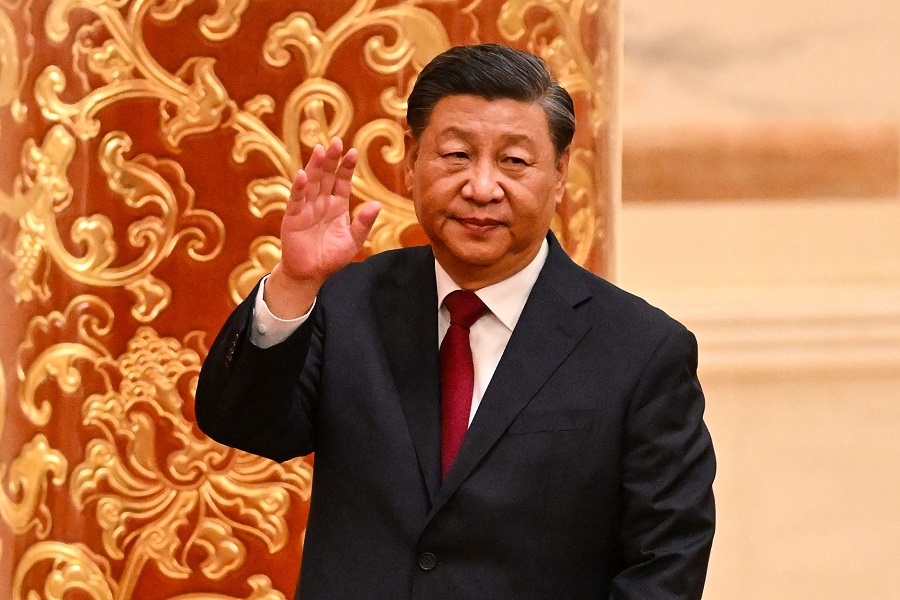 Chinese President Xi Jinping waves as he walks with members of the Chinese Communist Party's new Politburo Standing Committee, the nation's top decision-making body, to meet the media in the Great Hall of the People in Beijing, China, on 23 October 2022. (Noel Celis/AFP)

Grace Chong - 25 November 2022
China’s resurgence of Covid-19 infections has widened the gap between the young workers opposed to the tightening of controls, and the older generation that feel safer with strict measures in place. Given that the elderly make up a high proportion of the Chinese population, Chinese authorities seem to be holding fast to the dynamic-zero policy. Zaobao correspondent Wong Siew Fong tells us more.
Read more
Translated by Grace Chong on 26 October 2022

Chinese President Xi Jinping has amassed great authority and tightened his grip on power after ten years in office, achieving “one position as the highest authority”. Members of the 20th Central Committee and Politburo Standing Committee (PSC) have been revealed, and all other political factions have been decimated, resulting in the propagation of Xi-ism in the power structure. The Chinese Communist Party (CCP) is now solely at the behest of General Secretary Xi.

As Li Keqiang, Wang Yang, Li Zhanshu and Han Zheng — members of the 19th PSC and each with different backgrounds — were dropped from the new committee and replaced by Xi’s closest aides, there is practically no one in the new Central Committee who is not a Xi loyalist.

Power is now consolidated as Xi loyalists took over the leadership of the CCP, and the direction of the CCP has also been firmed now that the "Two Establishes" are enshrined in the party constitution. Having secured both power and direction, this marks the beginning of an era where Xi emerged as the sole authority of the CCP.

Xi’s leadership shake-up and the promotion of his loyalists to key positions are consistent with his heavy-handed ways. It has been described as a reshuffle of power in which “there is no compromise between factions, no regard for hierarchy and seniority, no benevolence, no inter-generational succession, no adherence to the customary retirement age, no rational and gentle processes. And not only that, all the pigeons (moderates) have been bitten to death”, which is generally true.

An era where party and social elites are devoid of autonomy is fast-approaching, and a silent world has befallen China.

There has never been another party other than the CCP in mainland China. Now that there is not even another faction within the CCP, Xi could truly have his final say in everything. There will be no dissenting opinion or voice. No one from mainland China society would dare to openly challenge Xi and his decision.

For the next five years, Xi possesses the highest authority and wields absolute power. He is in full control of the party and can effectively control Chinese society. An era where party and social elites are devoid of autonomy is fast-approaching, and a silent world has befallen China.

Xi-ism will reign over party ideology and China is set to be brainwashed by “Xi Jinping Thought on Socialism with Chinese Characteristics for a New Era”.

The constitution can be said to be tailor-made for him...

Detractors within the party

Japanese newspaper Sankei Shimbun accurately analysed that the CCP has abandoned the principles in Deng Xiaoping’s historical resolution, such as the prohibition of “personality cults”, the promotion of “collective leadership”, and the ruling out of “lifelong tenure”. The CCP is adhering to Xi-ism in all aspects — Xi’s will and authority will be fully manifested and embodied given the extent of his power. Since he also has the final say, any challenge to his path and policies will not be tolerated.

Xi has created a homogenous power structure, and the party congress has passed one of the most extensive amendments to the party constitution in history, incorporating all aspects of his ideology and policies. The constitution can be said to be tailor-made for him, establishing “Comrade Xi Jinping’s core position on the Party Central Committee and in the Party as a whole” and “the guiding role of Xi Jinping Thought on Socialism with Chinese Characteristics for a New Era”.

Moving forward, Xi Jinping Thought will be fully implemented “in all areas and stages of the work of the Party and the country”. So, how can there be any room for different opinions on China’s path or policies?

Throughout his ten-year rule, Xi has been consolidating his authority within the party, while expanding his power externally and strengthening his authoritarian rule. This has completely changed the power system within the CCP and extended the party’s control over all of society in its entirety. Xi removed potential opponents within the party, and also suppressed information and speech that may be detrimental to the party, the state and himself. The fact that all possible internal and external disagreements have been eliminated sufficiently guarantees his unchallenged core position in the party and the state in the short term.

For Xi to remove the moderates and potential competitors from the leadership signals that his overall priority over the next few years is the continuity of societal and political stability, as well as national security.

The term “security” is the most-used word in Xi’s political report. Evidently, he wants to be prepared for any internal or external factors that might threaten security. Political expert Li Cheng of the Brookings Institution assessed that the security of authority is undoubtedly the major concern. For Xi to remove the moderates and potential competitors from the leadership signals that his overall priority over the next few years is the continuity of societal and political stability, as well as national security. By promoting his proteges to the highest leadership, Xi has cemented his near-absolute power. Who can resist such firm determination?

Under the spectre of Xi’s power and beliefs, the focus and uniformity in thought within the party is greater than the previous leaders Deng Xiaoping, Jiang Zemin and Hu Jintao, and is close to or even more than that of the Mao Zedong era. Security of authority is Xi’s core concern, and he is well aware that there would be too many uncontrollable factors in direction, policy and implementation if there are many detractors in the party with different thoughts and low compliance.

The CCP had hopes of collective leadership, which was somewhat implemented during the time of Jiang Zemin and Hu Jintao, when there was some extent of democracy within the party.

Looking at the experience and strength of the new PSC and their relations to Xi, who has spent ten years regulating the CCP power structure, the members will undoubtedly act according to his instructions. With uniformity the new reality, and having one opinion the new normal, how can there still be conditions for collective leadership?

There is a push for the concentration of power, while extreme power is quietly taking shape.

China has made long strides forward in various areas under Xi Jinping. The country is making structural changes in many sectors, and its future progress will accelerate. At the same time, the CCP’s authoritarian leadership has strengthened while democracy within the party has weakened. There is a push for the concentration of power, while extreme power is quietly taking shape. Such a political and social system is one in form and views expressed will be unanimous with few dissenting voices.

However, this political system lacks diversity and is highly closed off. From within the party to society, there is no clash or contestation of views and opinions, while decisions are made top-down and implemented from inside to outside, which is not conducive to the creation of correct or good policies.

Also, it is easy for party members and the public to feel far removed, as they are not involved in the decision-making process and only act according to instructions. In the long run, it is easy to stand aloof as the sense of belonging wanes. The presence of surface unity does not signal real organic bonding, but is merely a matter of form.

Xi should remember that one person’s mind or intellect is no match for those of the many, and uniformity cannot match diversity.

Furthermore, the ability to self-correct weakens. Since the people are just going with what the top wants, obeying instructions and acting on orders, there is a lack of initiative on all levels. When everything is about passively taking instructions, how can there be a system of self-correction?

Following the strong setup and concentration of power during the 20th Party Congress, Xi should remember that one person’s mind or intellect is no match for those of the many, and uniformity cannot match diversity.

The "Two Establishes" was not included in the updated constitution of the Chinese Communist Party as published on 26 October 2022.

This article was first published in Lianhe Zaobao as “中国共产党全面习近平化”.

Related: Xi's model of Chinese modernisation shaking up China and the world | Chinese state media: Party and state leaders step down of their own accord | Xi removes Youth League faction from new leadership | Xi might be CCP top leader for life: ‘People’s leader’ might be written into CCP constitution | The most secretive party congress? Speculation around top leadership intensifies | What’s new in Xi Jinping's 20th Party Congress report