In his travels across China, Hisham Youssef trains his street photographer’s eye on some of the vanishing arts and trades that have endured for long but are now under threat of disappearing as China modernises. 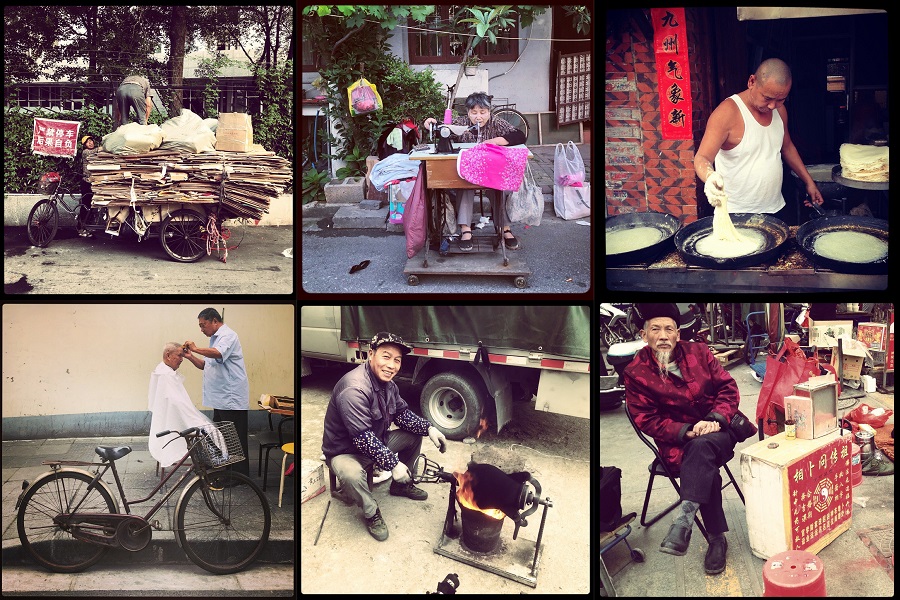 A glimpse of some of China's vanishing trades.

Grace Chong - 2 December 2022
Caixin notes that China is poised to roll out more policies to assist developers in an increasingly desperate attempt to arrest a protracted downturn of the multi-trillion-dollar property sector. However, amid the perform storm of changing demographics, Covid-19 disruptions, weakening demand and Beijing’s campaign of deleveraging, industry practitioners are bracing for a tough battle.
Read more
Translated by Grace Chong on 14 April 2021

China today is a country that encompasses a dizzying spectrum of old and traditional customs, as well as the latest in urban infrastructure and digital technology. But it is in the older neighbourhoods of its cities and rural areas that true culture and colour are on full display. Chinese people are very vibrant, active and social. They conduct much of their life outside of their homes. Social gatherings are plentiful, be they families playing with their children, group dancing, community activities during festivals, grooming or exercising. However, as Chinese cities urbanise and become gentrified, and many people move into cities, most of the traditions that have endured for centuries are very quickly disappearing from the streets and being replaced by more modern and efficient alternatives. Fast disappearing are the street sweeper, the neighbourhood seamstress, the barber, and many more. Moreover, the older generation who has kept these traditions alive in cities and the countryside will soon be gone, and with their offspring embracing more modern options in the cities, these everyday traditions that lived on for generations cannot survive. Below is a visual snapshot of some of these vanishing traditions.

To make the popcorn, these vendors carry a dangerous-looking pressure container which they rotate over heat until the pressure reaches the right degree at which point it pops open with the familiar head-turning loud bang. Upon opening, it yields a batch of fresh, hot popcorn. These vendors are fast becoming a thing of the past — how can they complete with the large fast food industry?

With the gentrification of many cities, these travelling sidewalk barbers are fast disappearing. Often they travel on their bicycles with a box filled with the tools of their trade — the contents likely have not changed much from the time of the earliest barbers who reportedly started working in China in the 14th century. They usually set up operations in the same spot on a sidewalk for repeat clients, and will attend to all hair trimming needs.

These collectors form part of a large underground recycling network of waste collectors and managers said to number several million people across China. Collectors take their loot, either by finding it in the trash or paying to collect it from some of the more affluent residential compounds, and sell them to recycling plants. Cardboard is only one of the items that are collected and sold to recycling plants — cardboard, however, ranks at the bottom in profitability. Metals and other building materials are valued higher.

Fortune telling is an old occupation in China and comes in many varieties — now it is more commonly referred to as suanming (算命) or “calculating fate”.  It remains mainly popular among business owners or people keen to find out what their futures will bring.

Street sweepers, part of the larger network of sanitation workers, can still be seen in the city in many of the old and residential neighborhoods. They have endured in areas that may not be as easily reached by modern cleaning vehicles or where it is more economical to retain their services. Many are often migrants seeking better fortunes. Employed by the city, they may have benefits such as annual breaks to go back to their hometowns, but often work long hours and their pay is among the lowest.

Although China is a country with a long tradition of calligraphy, the dishu (地书) or “street water calligraphy” variety traces its origin to only around the late 1980s in Beijing. It is practiced mostly by older and retired Chinese — it provides a way to fill their time and kill boredom. As the artists sway their bodies to move the often large sponge brushes, it is also a way to remain fit. But more importantly the practice has great social value where retirees come together to learn from each other. The artists can often be seen in many city parks.

With urbanisation, the countryside in China has seen a great decline in population, what with the young generation often moving to big cities leaving the old behind. Farming is now often attended to by the old.

Often hard at work for long hours, seamstresses are a familiar sight in old neighbourhoods where they service the poor and older residents. Equipped with their mobile sewing machine, a box of trade accoutrements and some fabric scraps for various odd jobs that clients refer them to, these tailors often claim the same spot on a sidewalk for repeat clientele or wander between neighborhoods seeking more problems to fix.

This performance took place on the anniversary of the departure of Xu Xiake (a famous Chinese explorer) on his travels across China from Ninghai. Carnival performers are often local performers working part-time at festivals for a variety of celebrations, of which there are many in China which are often very festive and colourful.

China is famous for its regional varieties of pancakes of various sizes, thickness, fillings and tastes, which are served at many times of the day. The port of Quanzhou, historically famous for being the eastern terminus of the maritime Silk Route, has a rich culinary culture.

Related: An Egyptian-American architect's poignant photographs of disappearing Shanghai neighbourhoods | The ‘other’ Shangri-La: A journey through western Sichuan | [Picture story] How Chinese food made its way all over the world