The ‘other’ Shangri-La: A journey through western Sichuan

Shivaji Das, author of travelogue “The ‘Other’ Shangri-la: Journeys through the Sino-Tibetan Frontier in Sichuan”, captures vignettes of life in the picturesque mountains of the Garzê Tibetan Autonomous Prefecture in western Sichuan. At the end of his journey, he asks: Would Shangri-La become indistinguishable from Disneyland? Would Han cultural hegemony obliterate every other peculiarity once a mesh of high-speed trains, all-weather roads, and Weibo accounts spread out in the region? Or would an environment of mutual trust, understanding, and accommodation be established? 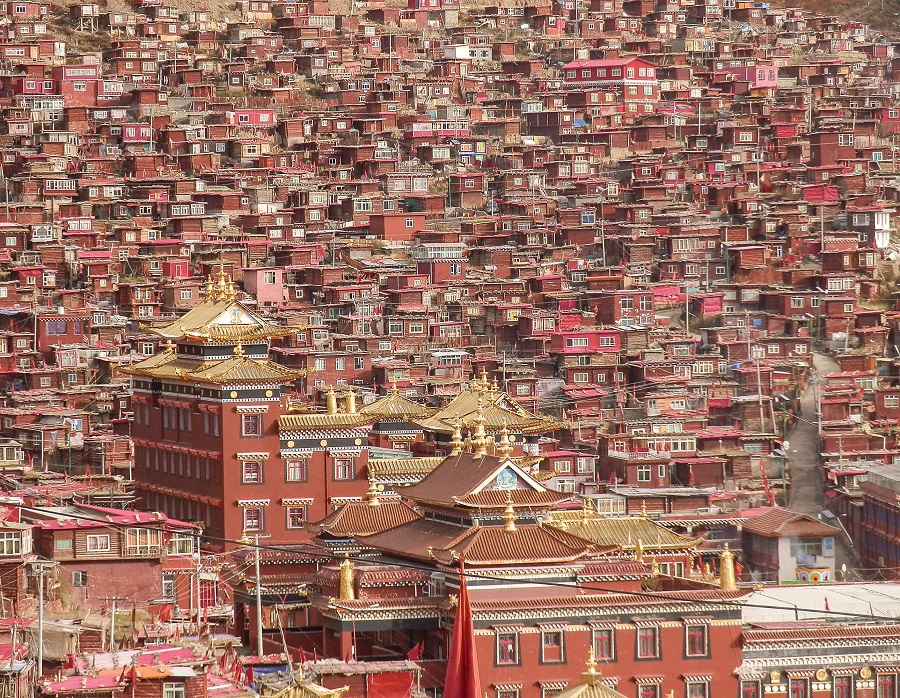 The Larung Gar, a community in Sertar County of the Garzê Tibetan Autonomous Prefecture, in Sichuan, China.

Grace Chong - 28 June 2022
While some pundits have it that Iran sees gaining full membership of the Shanghai Cooperation Organisation in terms of geopolitics, Fan Hongda thinks that the more bread-and-butter concern of strengthening economic and trade cooperation is on its mind. But this is not to say that Iran does not harbour ambitions of playing a greater regional role.
Read more
Translated by Grace Chong on 24 March 2021

(All images courtesy of Shivaji Das.)

During my journey to western Sichuan, outside my van would be spectacular snow mountains over 18,000 feet high, gorges and precipices that dropped below 1,000 feet, and serene grasslands dotted with yaks and horses. Inside my van would be Kham-Tibetan men, China’s most eligible bachelors, dressed like dandies acting in a spaghetti western, yodelling high and smelling strong from years of not having taken a shower. Monks squeezed in between chanted “Om Mani Padme Hum”.

I began my trip in Kangding, a town at the crossroads of Han and Tibetan cultures, famous all over China for the “Kangding Love Song”. The 60-year-old song still rolls forever at the town’s main square, the residents dancing to its tune in circles. At Kangding, I even found a ramshackle Catholic church where a drunken security guard told me that the Vatican was just a short bus ride away.

Once a nomad, always a nomad

From Kangding, I headed to the 4,000-metre-high Tagong grasslands. There, I stayed with a nomad family, one of the few still living through the hardships and charms of this ancient pastoral lifestyle. Life expectancy among nomads remained low while the girl child often didn’t go to school. Many nomads still practiced polyandry. The government has run many campaigns to settle them but some reverted back to the only way of living they knew. “Why should we have to pay for milk, butter, cheese?” asked Tashi, “Look at all my yaks. Nature gives me all these for free.”

My next destination was Litang, also known as the world’s highest town. Litang has given birth to an astonishing number of Tibetan lamas and saints. The Sixth Dalai Lama, adored across China and Tibet for his poems about love and wine, had written the famous couplet under captivity:

Lend me your wings

I will not fly far

From Litang, I shall return

The famed Litang monastery had been besieged and bombed by the army of the People’s Republic of China during the Kham resistance of 1955-56. Post the massive fire of 2013, the Chinese government was now helping in its reconstruction, part of its recent drive to win Tibetan hearts by toning down its earlier practice of subduing the monks and monasteries. At the white pagoda in Litang, Tibetan believers surrounded me upon hearing that I was born in India. Tsering, a young mother, dragged along her girl, “Come child. Touch him. He comes from where our Dalai Lama resides.”

From Litang, I headed to the picturesque Yading valley. At Yading, orange- and purple-coloured grasslands were interspersed with mirror lakes and turquoise streams, all framed by towering snow mountains. This pristine area once harboured bandit monks but was recently caught in a crazy contest among towns in southwest China for renaming itself as “Shangri-La” to attract tourists. The nearby town of Daocheng boasted of the world’s highest airport. The growing popularity of Yading had attracted many entrepreneurs (mostly Han) from all over China who set up chic hotels, cafes and hot-pot restaurants in Daocheng. I stayed at a place run by two young men who were once touring acrobats before they saw an opportunity and placed their bets on Daocheng.

Namgyal, a cleaner in Yading, told me, “We Tibetans don’t understand business like the Hans. The tourists started coming only about three years ago. And then we saw more and more Hans settling down around Yading. They signed long-term rental contracts with us for our houses — 100,000 RMB a year for ten years. We Tibetans were very happy. Then they renovated the houses and shops and within a year rented them out to other Han businessmen at three times the price. My brother became very angry but he has signed a contract. It is not the Han’s fault. But still, we complain.”

We patronised a restaurant run by two Tibetan sisters, where I relished a dessert made of ginseng fruit boiled in butter with sugar.

“This fruit is very special,” Dechen, one of the sisters, said. “One serving can increase your life by one year. So come back tomorrow.”

When I asked about their business, she said, “Tibetans are rich now. We have free education. Healthcare is subsidised and we also get other benefits because we are minorities. Of course, most businesses here are run by Hans but Tibetans make money from renting, and picking caterpillar mushrooms that are in high demand in China. Women are better off too. I have more say than my mother. You see, Kham men are fierce, bold, courageous, always willing to fight. But they don’t do any work. My husband doesn’t help at all with the child or the shop. They think it will make them girly. But nowadays, times have changed. Other men, not mine, are becoming like men from anywhere. Some even do cross-stitch.”

From Daocheng, I went up north to Sertar and Larung, home to the world’s largest monastery and at over 4100 metres, arguably the world’s highest slum. Larung was chock-a-block with red matchbox houses, filled with over 5000 monks, nuns, and lay people, Hans and Tibetans, flocking there in search of enlightenment.  A road split the settlements into male and female quarters. I spoke with Jingme, a monk who studied and meditated every day from dawn till midnight.

He said, “Most of us just move on after studying here a few years and then join as monks in some other temple. As for me, I want to study more. I want to explain to the rest of the world my knowledge and understanding of Buddhism.

“Here, life is good, even though so many people live so close. But there are many rules to follow; maybe too many. Like there is one for wearing vests.”

Beauty in the eye of the beholder

At Larung, I witnessed a sky burial wherein the body of the deceased was chopped up and offered to vultures, shocking (to outsiders) yet a perfectly rational arrangement in such high altitude. Sertar was also known as the playground of King Gesar, from the Epic of Gesar, the world’s longest song that is still growing.

My final destination was the Danba valley, famed since antiquity for its beautiful and strong-willed women with whom a myth of an Eastern Queendom is associated.

Nowadays, an annual beauty contest is held in Danba and villagers from neighbouring areas show up in their best costumes to attend the spectacle. Dorje Xiamu, one of the past winners, said, ““Every village nominates a beauty for this. In my time, there wasn’t much of a talent contest like now. It was just about height, figure, and appearance. So we could just dress well and show up. My life didn’t change much after winning. But nowadays the winners are mostly university students or those working in cities. So once they win they can make a lot more out of their lives.”

Lhamo, one of the shortlisted contestants, told me, “Even after all the preparations, anything can happen. If something goes wrong, it is so shameful. My family would lose face. My village would lose face. I was so nervous.”

As I completed my journey, I promised to myself to return to this region after 30 years. But by then, would the mountains of Yading harbour giant industrial complexes of water-bottling plants? Would Shangri-La become indistinguishable from Disneyland? Would Han cultural hegemony obliterate every other peculiarity once a mesh of high-speed trains, all-weather roads, and Weibo accounts spread out in the region? Or would an environment of mutual trust, understanding, and accommodation establish itself, if the popularity of Tibetan Buddhism, Tibetan script, and Tibetan music in China becomes more than a passing fad? Would it be the time for “Shangri-La”? Would the idea of the ‘other’ remain?

Shivaji's latest book, The ‘Other’ Shangri-La (Konark Publishers - India, USA), is a work of narrative non-fiction based on his journey through the Sino-Tibetan frontier land of western Sichuan. The book is available on Amazon and in Singapore at Kinokuniya stores.

Related: Poverty alleviation in Tibet: For young Tibetans, material wealth and city life beckon | [Photo story] Chinese central government and the Dalai Lama: 1950–1956 | India losing Nepal as China-Nepal relations strengthen | The power of food memories in shaping who we are