Nepal, an erstwhile land-locked country wedged between India and China, was famously called “a yam between two boulders” by the founder of modern Nepal, King Prithvi Narayan Shah. It has always had limited options in terms of foreign policy, but refusing to let geography dictate its fate, it is placing a larger bet on China with the hope that it will gain more leverage and avoid being squashed. 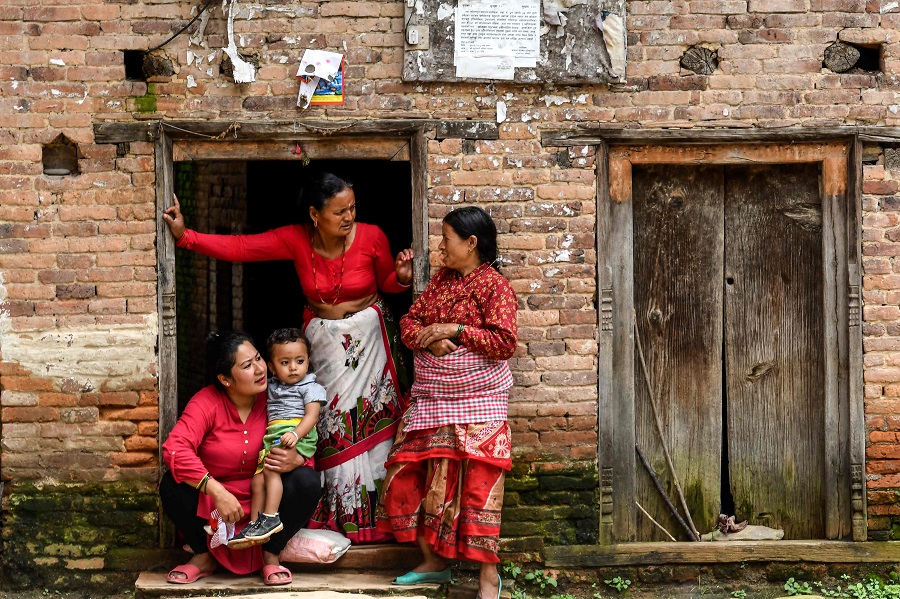 Residents wait to watch the processions of the 'Ropain' or rice plantation festival and the 'Gai Jatra' Hindu festival at Khokana village on the outskirts of Kathmandu on 5 August 2020. (Prakash Mathema/AFP)

Grace Chong - 2 December 2022
Caixin notes that China is poised to roll out more policies to assist developers in an increasingly desperate attempt to arrest a protracted downturn of the multi-trillion-dollar property sector. However, amid the perform storm of changing demographics, Covid-19 disruptions, weakening demand and Beijing’s campaign of deleveraging, industry practitioners are bracing for a tough battle.
Read more
Translated by Grace Chong on 7 August 2020

On 1 August, Nepal and China marked 65 years of diplomatic relations. The two countries formalised their relations in 1955 based on the principles of mutual respect, cooperation and the Five Principles of Peaceful Coexistence.* Traditionally, Nepal’s diplomatic ties were limited to India due to New Delhi’s instrumentality in reinstating the throne of the Shah family in 1950 by ousting the powerful Ranas. After the demise of King Tribhuvan in 1955, his son Mahendra strongly advocated and developed ties with its northern neighbour, China.

Said a statement released by the Chinese foreign ministry on the congratulatory message President Xi Jinping sent to Nepalese President Bidya Devi Bhandari: “Xi reaffirmed his commitment to growing China-Nepal relations and his readiness to work with President Bhandari to take forward the bilateral ties, deliver greater benefit to the two peoples and contribute to regional stability and development.” Nepal warmly reciprocated the message with President Bhandari stating that “the strong bond of friendship between the two countries will be further strengthened in the days ahead”.

Hemmed in by geography

Located between the two giant Asian economies of India and China, Nepal is a landlocked country in South Asia. It shares a long open border with India on three sides and China on the north. The founder of modern Nepal, King Prithvi Narayan Shah, had termed Nepal’s geography as a “yam between two boulders”. While Nepal’s ties with India have long been marked by age-old people-to-people, socio-cultural and economic relations, its relations with China have been based on regional balancing in terms of territorial security. Nepal moved closer to China, in particular during strained ties with India in 1975, 1989 and 2015.

The first significant engagement between Nepal and China began with the signing of the Treaty of Peace and Friendship in 1960 and a boundary agreement in the same year. The relationship was elevated to a development partnership in 1967 after China began to construct the Prithvi Highway in Nepal and completed it in 1974. Post-1975, Nepal began to seek international support in recognising it as a zone of peace to balance ties between India and China. While China became one of the first countries to recognise Nepal as a zone of peace, India declined to do so, citing mutual security concerns.

In its first act of confidence-building, Nepalese security forces had quashed rising anti-China voices among the 20,000 Tibetan refugees living in Nepal during the 2008 Tibetan unrest.

Nepal-China relations received another push after the visit of President Jiang Zemin in 1996. However, amid Nepal’s high dependency on India for its third country trade and transit through Kolkata port, the potential to develop ties with China was minimal. Nonetheless, with the dawning of the 21st century, Nepal made remarkable changes in strengthening relations with China. In 2005, China was reportedly the only country to have helped the King of Nepal in fighting against the guerilla Maoists by supplying arms and ammunition after the US, India and the UK imposed sanctions.

China has time and again sought Nepal’s support for its one-China policy to which Nepal has responded positively.

After a ten-year-long civil war, Nepal became a democracy in 2008. The new government led by Prime Minister Pushpa Kamal Dahal of the Communist Party of Nepal (Maoist) chose to deepen ties with Beijing, and for the first time, a newly elected prime minister of a democratic Nepal paid his first official visit to China — ostensibly to attend the closing ceremony of the Beijing Olympics — rather than to India as per the existing tradition. In its first act of confidence-building, Nepalese security forces had quashed rising anti-China voices among the 20,000 Tibetan refugees living in Nepal during the 2008 Tibetan unrest.

Strategically, Nepal is an important country for the stability of Tibet for two reasons. One, a large Tibetan population residing in Nepal, has been critical of the Chinese government. Therefore, China has time and again sought Nepal’s support for its one-China policy to which Nepal has responded positively. Second, a stable relationship with China has helped Beijing in stopping Tibetans from fleeing through the China-Nepal border into India.

For the first time, the People’s Liberation Army (PLA) and the Nepali Army held two joint-military exercises in 2017 and 2018 in Kathmandu and Chengdu respectively.

On the other hand, Nepal has been seeking to get access to the Chinese ports for its third-country trade, especially after an alleged border blockade by India in 2015. This was in relation to protests by the Madhesi people — many of whom have relations in India — that had taken place after Nepal’s constitution was forged but appeared not to have adequately taken their interests into account. The border blockade episode led to the downfall of India’s traditional goodwill in Nepal.

In 2017, Nepal formally joined the Belt and Road Initiative (BRI) under which China is developing airports, building roads and dams. Among others, the US$ 2.5 billion trans-Himalayan railway connecting Tibet to Nepal’s capital city Kathmandu is one of the most ambitious projects undertaken by the Chinese government under the BRI. China has also agreed to grant access to its Tianjin, Shenzhen, Lianyungang, and Zhanjiang ports and three other dry ports which will relieve Nepal from an overdependence on India.

For the first time, the People’s Liberation Army (PLA) and the Nepali Army held two joint-military exercises in 2017 and 2018 in Kathmandu and Chengdu respectively. Since 2019, the PLA has also agreed to provide financial assistance to the Nepali Army on a regular basis. In 2014, China surpassed India’s foreign direct investment (FDI) in Nepal and it accounted for 90% of Nepal’s total FDI with an estimated US$ 88 million in 2019. Meaning, in the last five years alone, along with newly established relations in the defence sector, Nepal-China ties have deepened in the economic, trade and transit realms.

Winds of change and pivot to China

In 2019, President Xi became the first president to visit Nepal after a gap of 23 years after Jiang Zemin in 1996. During the visit, Nepal and China elevated their ties from “Comprehensive Partnership of Cooperation Featuring Ever-lasting Friendship” to “Strategic Partnership of Cooperation Featuring Ever-lasting Friendship for Development and Prosperity”. China also signed a Treaty on Mutual Legal Assistance in Criminal Matters (MLACM) and expressed hope for an early conclusion of the Treaty on Extradition. For years, China has been pushing for an extradition treaty with Nepal, which will ensure the extradition of Tibetans fleeing into Nepal. The MLACM is the first step towards that.

The ongoing border tensions between Nepal and India and anti-India campaign on social media with hashtags like #GoBackIndia #BackOffIndia are evidence of reported perceptions by Nepal of being “taken for granted” by India.

Furthermore, considering the traditional ties between Nepal and India, new vistas between Kathmandu and Beijing indicate a change in the strategic environment in the Himalayas. The ongoing border tensions between Nepal and India and anti-India campaign on social media with hashtags like #GoBackIndia #BackOffIndia are evidence of reported perceptions by Nepal of being “taken for granted” by India. With its new engagement with China, Nepal is also changing its geographical definition from being a landlocked to a land-linked country.

To conclude, with the high-terrain border, poor road infrastructure in Nepal and just one functional trade transit point between Nepal and China, economic relations between the two countries may take a few years to become efficient. However, the symbolic message of these developments is to challenge India’s traditional presence in Nepal, and to say that it is India’s own fault for mishandling Nepal since the anti-India voices are not new in Nepal.

Furthermore, in contrast to the loud welcome given to China, US-led initiatives aimed at countering BRI in Nepal have suffered major setbacks. For instance, the Millennium Challenge Corporation (MCC)’s Nepal Compact continues to await parliamentary approval in Nepal. Therefore, Nepal-China cooperation is being advanced along the lines of mutual benefit for which other power centres like India or the US will have a tough challenge in days to come due to their existing policy vacuum towards Nepal.

*The Five Principles of Peaceful Coexistence were set in 1954 by then Indian Prime Minister Jawaharlal Nehru and Chinese Premier Zhou Enlai and comprise 1) mutual respect for each other’s territorial integrity and sovereignty; 2) mutual non-aggression; 3) mutual non-interference in each other’s internal affairs; 4) equality and mutual benefit; and 5) peaceful coexistence. These principles were worked into the ten principles stated in the final communique of the Asian-African conference of Bandung attended by China, Nepal and several other newly independent countries from Asia, Africa and the Middle East.

Related: India-China relations: Compromises and conflicts amid Covid-19 | China-India border clash: Will India's misperceptions of China's strength lead to war? | China and India: When Western democracy fails and only utopia remains | Uneasy Dance between an elephant and a dragon: 70 years of diplomatic relations between India and China | China and India say 'no' to Trump's offer to mediate border tensions